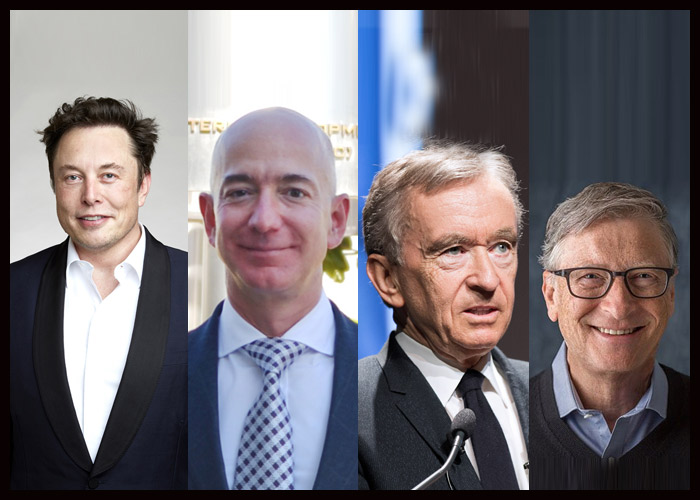 Ten Richest Billionaires In The World

Let’s now consider the 10 richest people in the world as of this writing—December 22, 2021—based on the Forbes’ The Real-Time Billionaires List.

1. Elon Musk: The co-founder and CEO of Tesla is currently the richest person with a net worth of $245.6 billion. A revolutionary entrepreneur, Musk is also the the founder, CEO and Chief Engineer at SpaceX, a space research and tourism company. He is also the founder of the Boring Company and co-founder of Neuralink and OpenAI.

Musk was born to a Canadian mother and South African father, and was raised in Pretoria, South Africa. Musk’s first step into business world was by co-founding the web software company Zip2 with his brother Kimbal. The startup was acquired by Compaq for $307 million in 1999. The same year, Musk co-founded online bank X.com, which merged with Confinity in 2000 to form PayPal. The company was bought by eBay in 2002 for $1.5 billion.

2. Jeff Bezos: Amazon founder and CEO Jeff Bezos, who currently has a net worth of $196.3 billion, is the second richest person on earth. Bezos’ earned most of his wealth from e-commerce giant Amazon, which he founded in 1994 out of his garage in Seattle. He stepped down as CEO to become executive chairman on July 5, 2021. Like his competitor Musk, Bezos also owns a space research and tourism company Blue Origin. He also has investment in The Washington Post and the 10,000-year clock, also known as the Long Now.

3. Bernard Arnault: The Chairman and CEO of LVMH, the world’s largest luxury goods company, is the 3rd richest person in the world. Arnault is the wealthiest European on the list with a net worth of $192.7 billion. LVMH is the parent company of some of the most popular luxury brands, including Louis Vuitton, Hennessey, Marc Jacobs, Moët & Chandon, TAG Heuer and Sephora. The majority of Arnault’s wealth, however, comes from his massive stake in Christian Dior SE, the holding company that controls 41.2% of LVMH. His shares in Christian Dior SE, plus an additional 6.2% in LVMH, are held through his family-owned holding company, Groupe Familial Arnault.

4. Bill Gates: The Co-founder and former CEO and Chairman of software behemoth Microsoft Corp. (MSFT) is the 4th richest person. Gates, who generated most of his fortune from his software firm, has now diversified his fortune and switched his focus to zero-carbon energy investing and philanthropy. He is currently worth $136.1 billion.

Gates has stake in dozens of companies including Canadian National Railway and AutoNation. He is also one of the largest owners of farmland in the U.S. To date, Gates has donated $35.8 billion worth of Microsoft stock to the Gates Foundation.

5. Larry Page: The Co-founder and board member of Alphabet Inc. (GOOG), the holding company of search giant Google, is currently worth $122.8 billion, which makes him the 5th richest person in the world.

He co-founded Google in 1998 with his fellow Stanford Ph.D. student Sergey Brin. Page stepped down as CEO of Alphabet in December 2019, but remains a board member and a controlling shareholder. He is also a founding investor in space exploration company Planetary Resources and is also funding “flying car” startups Kitty Hawk and Opener.

6. Larry Ellison: The CTO and Founder of software company Oracle (ORCL) is currently worth $122.5 billion, earning him the 6th spot on the list of top ten richest people in the world. Ellison currently owns 35 percent stake in Oracle. He had previously served as the CEO of the company for 37 years until 2014. Ellison also serves on Tesla’s board, which he joined in December 2018 after purchasing 3 million Tesla shares.

7. Mark Zuckerberg: The Co-founder and CEO of social networking giant Facebook Inc. is the 7th richest person on earth and the only person in the top 10 list below the age of 40. He is currently worth $119.6 billion. Although the social networking giant has come under political scrutiny in recent times, the platform continues to witness user growth and generates billions in ad revenues. Zuckerberg currently owns about 12% of Meta Platforms Inc (FB), the parent company of Facebook, WhatsApp and Instagram.

8. Sergey Brin: The co-founder and board member of Alphabet Inc. (GOOG), the holding company of search giant Google, is the 8th richest person with a net worth of $118.3 billion. Brin co-founded Google with Larry Page in 1998 after the two met at Stanford University while studying for advanced degrees in computer science. Brin was the president of Alphabet until stepping down from the role on December 3, 2019.

9. Warren Buffett: The CEO of Omaha, Nebraska-based multinational conglomerate holding company Berkshire Hathaway Inc. is at the 9th spot on the list. His current net worth is $106.8 billion. Berkshire Hathaway owns over 60 companies, including insurer Geico, battery maker Duracell and restaurant chain Dairy Queen. Buffett, one of the most successful investors of all time, is popularly called as the “Oracle of Omaha.”

In 2010, he and Bill Gates launched the Giving Pledge, asking billionaires to pledge at least half of their wealth to charity. He has promised to donate over 99% of his wealth. So far he has given more than $45 billion, mostly to the Gates Foundation and his kids’ foundations.

10. Steve Ballmer: The former CEO of software giant Microsoft Corp. (MSFT) and current owner of NBA team Los Angeles Clippers is currently worth $103.4 billion. This makes him the 10th richest person on earth. Ballmer, who joined Microsoft in 1980 as the company’s 30th employee, led the company from 2000 to 2014.

Garlinghouse Shakes Off SEC's "Antics" Towards Ripple and XRP, Wants Answers On The Legal Status Of Ether
Technology