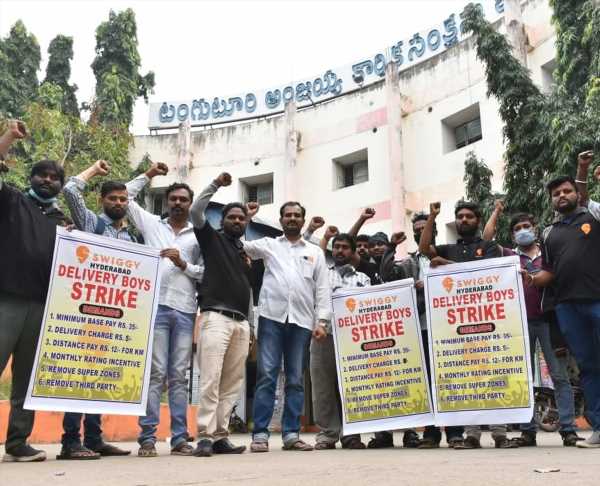 ‘Swiggy is exploiting its delivery boys’ They believe they are being shortchanged by the popular delivery service and, since November 29, have been wearing black bands in protest.

If their demands are not met by December 5, they say they will boycott work.

Shaikh Salauddin, national general secretary, Indian Federation of App-based Transport Workers, tells Rediff.com‘s A Ganesh Nadar, “We are paid by distance and the distance is calculated from the restaurant to the client’s home. We don’t get paid for travel to the restaurant from where we are.”

You want the salaries of the Swiggy delivery partners to be raised.

They have different rate cards for different cities.

They are saying that they are giving the best rates in this city but they are exploiting the delivery boys. Our demands are old, not new.

During COVID, instead of increasing rates, they are reducing them.

The company doesn’t talk to us. They don’t give reasons.

They promise deliveries in 15 minutes. This leads to accidents.

We have started a black band protest since November 29.

From December 5, we will go on strike if our demands are not met. We are also planning dharnas after getting police permission.

You say you don’t get paid for climbing stairs. Are you suggesting different rates for different floors?

I am not suggesting different rates. We are asking the company to pay for the time we spend in pick-ups and delivery. Is it true that you get paid for delivering food, but not for going to the restaurant?

We are paid by distance and the distance is calculated from the restaurant to the client’s home.

We don’t get paid for travel to the restaurant from where we are. This travel is called a dry run.

How many members are there in your union?

In Telangana, inclusive of Hyderabad, we have 12,000 members.

Are you protesting only in Hyderabad or across Telangana as well?

Protests have started in Guwahati, Bengaluru and Hyderabad.

We are talking to unions in cities like Chennai, Delhi, Kolkata and Mumbai.

Soon, all India protests will start. Are all of Swiggy’s delivery boys part of your union or some other union? Are some of them not part of any union?

All are part of some union or the other. There are no non-union drivers.

You have asked for a minimum base pay of Rs 35. What is the base pay now?

You have asked to increase batch order pay (when there is more than one delivery from a restaurant to different homes in the same area) to Rs 20. How much is it now?

You want the customer doorstep delivery charge of Rs 5 to be reintroduced. Aren’t you supposed to deliver at the doorstep?

We are talking about delivery inside colonies.

Though the distance is calculated till the gate, many times the concerned address is at a good distance from the main gate.

You want to increase distance pay from Rs 6 per km to Rs 12 per km. A hundred per cent increase would lead to a higher price. Won’t you lose customers?

They got so much money though their IPO and are still showing a loss.

What is your monthly rating incentive and when was it stopped?

If customers gave us a good rating, we used to get some remuneration. During COVID, they stopped it. What is the ‘super zone’ that you want removed?

That is about going from my zone to the next zone.

There was a problem between delivery boys about crossing zones.

We don’t want zones. Everyone should be allowed to deliver anywhere.

You have also raised the issue of third party delivery; why would Swiggy assign orders to third parties if you were delivering properly?

Even when we are free, they are giving delivery orders to outsiders because they have some understanding with them.

The policies you are protesting against… do the same policies apply to Swiggy employees in other parts of the country? If yes, how come they are not protesting?

It will start in other cities soon. I have already told you three cities where the protests have already started.