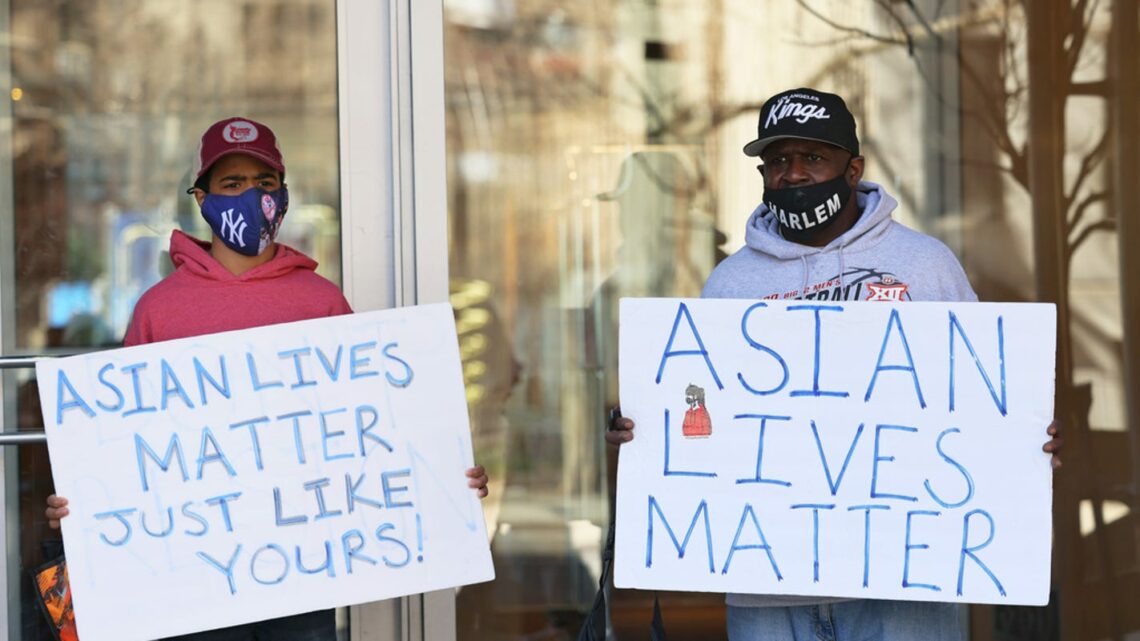 NEW YORK – Police on Wednesday said a man suspected of brutally assaulting an Asian American woman in broad daylight has been arrested after surveillance video of the attack drew widespread condemnation.

Elliot was convicted of stabbing his mother to death in the Bronx in 2002, when he was 19, online court records show. He was released from prison in 2019 and is on lifetime parole.

The attack occurred before noon Monday outside a luxury apartment building in Midtown Manhattan. The suspect hurled anti-Asian sentiments and assaulted a 65-year-old woman, NYPD said.

Surveillance video from inside the building captured images of the assault, showing a man kicking and stomping on the woman multiple times. In the video, staff inside the building do not immediately appear to intervene, though a union representative said they called for help.

The woman was hospitalized with serious injuries but was in stable condition, NYPD said Tuesday.

Elliot was living in a hotel nearby the attack that serves as a homeless shelter, NYPD said. Commissioner Dermot Shea tweeted he was on parole on a supervised release. It was not immediately clear whether Elliot had an attorney.

“Great work by your @NYPDDetectives, identifying & apprehending the assailant, all within 48 hrs — always seeking justice for victims,” Shea tweeted.

Officials in New York City and beyond swiftly condemned the attack and highlighted how it was another case in a growing number of incidents of anti-Asian hate and discrimination during the COVID-19 pandemic.

More than 3,795 incidents were reported to Stop AAPI Hate from March 19, 2020, to Feb. 28, 2021, “only a fraction of the number of hate incidents that actually occur,” the advocacy group said. The organization tracks incidents of hate, violence, harassment and discrimination against Asian Americans and Pacific Islanders in the U.S.

Mayor Bill de Blasio called the incident “absolutely disgusting and outrageous” and said it was “absolutely unacceptable” that witnesses did not intervene.

“I don’t care who you are, I don’t care what you do, you’ve got to help your fellow New Yorker,” de Blasio said Tuesday at a news conference. “If you see someone being attacked, do whatever you can. Make noise. Call out what’s happening. Go and try and help. Immediately call for help. Call 911. This is something where we all have to be part of the solution. We can’t just stand back and watch a heinous act happening.”

In a statement, the head of the union representing the building workers disputed the allegation that they did not act and said the workers called for help immediately.

“Our union is working to get further details for a more complete account and urges the public to avoid a rush to judgment while the facts are determined,” union President Kyle Bragg said.

The management company of the apartment building in front of which the attack occurred said Monday it had suspended the staff members who did not intervene in the incident, pending an investigation.

This image released on March 30, 2021, on its Twitter feed (@NYPDTips) by the New York Police Department Crime Stoppers shows a man wanted in connection of an assault on a 65-year-old Asian American woman on March 29, 2021. (Photo: -, @NYPDTips/AFP via Getty Images)

“The Brodsky Organization condemns all forms of discrimination, racism, xenophobia and violence against the Asian American community,” the company said.

The victim “could easily have been my mother,” said Andrew Yang, a mayoral candidate and the son of Taiwanese immigrants. Yang also called bystanders’ apparent inaction “exactly the opposite of what we need here in New York City.”

NYPD sought the public’s help in the case and also have said they were increasing patrols in predominantly Asian communities amid the spike in incidents. In New York City, there have been 33 hate crimes with an Asian victim as of Sunday, compared to just 11 as of this time last year, NYPD said.

In Washington on Tuesday, Attorney General Merrick Garland announced a 30-day review to assess the government’s tracking capabilities and prosecution of hate offenses that are surging across the country.

“The recent rise in hate crime and hate incidents, particularly the disturbing trend in reports of violence against members of the Asian American and Pacific Islander community since the start of the pandemic, requires renewed energy…” Garland said in a memo to all Justice Department staffers.

New York City is deploying additional law enforcement personnel to Asian communities in the wake of a series of shootings at three massage parlors near Atlanta, Georgia (March 17)