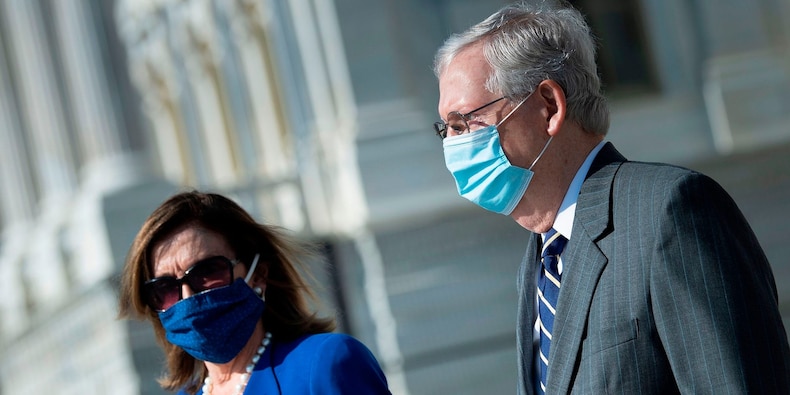 US stocks finished they day higher in a shortened trading session on Christmas Eve as political wrangling over a $900 billion stimulus bill continued into Thursday after President Trump requested $2,000 stimulus checks to be included.

House Speaker Nancy Pelosi attempted to add an amendment to the bill increasing the size stimulus checks to $2,000 from $600 via unanimous consent, but the initiative failed Thursday morning.

Now, the House of Representatives has adjourned until Monday at 2:00 P.M., leaving it up to President Trump to sign or veto the original stimulus bill that passed the House and Senate earlier this week. Pelosi signaled that she will hold an official vote of the $2,000 check amendment on Monday to put House members on the record.

Here’s where US indexes stood shortly after the 9:30 a.m. ET open on Thursday:

Read more: ‘It could be a Roaring 20s that will end badly’: An equities chief who oversees over $7 billion shares his investing playbook and major predictions for 2021 and beyond

Alibaba slid as much as 18% and suffered its worst trading day ever after the Chinese government opened an anti-trust investigation into the e-commerce giant.

Altimmune fell 10% after the FDA put a clinical hold on its intranasal COVID-19 vaccine candidate.

Read more: A hedge fund chief who oversees $2 billion breaks down why we’re in for a 61% stock-market crash over the next 18-24 months – and shares 3 types of companies he’s shorting right now