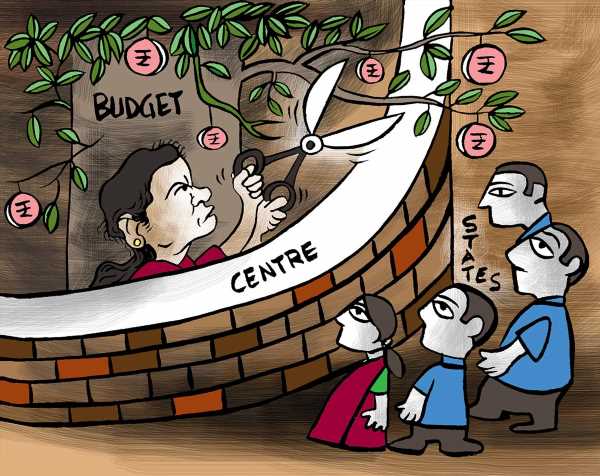 States worry as Centre plans to trim schemes in Budget

‘It is just an excuse to say that the Centre has run out of money.’
‘Pruning these schemes would mean hard time for the people of India.’
Dilasha Seth reports. As fiscal constraints and the need to allocate funds for Covid vaccination are pushing the Union government to rationalise and even discontinue some of the centrally sponsored as well as central sector schemes in the Budget-making process, Opposition states have raised concern over such a move.

Currently, centrally sponsored schemes (CSS), at an allocation of Rs 3.4 trillion, make up for about 9 per cent of the Union Budget.

Earlier, there were nearly over 60 centrally sponsored schemes, but many of them were phased out after the recommendations of the 14th Finance Commission were implemented.

Ahead of the Budget, the ministry of finance asked ministries and departments to send evaluation of various schemes by January 15.

Even schemes that have been found to be effective may need to be discontinued due to fiscal constraints, the directive sent to the ministries said.

“These schemes need to be rationalized with limited resources at our disposal. We need to increase capex, health spend and then there is a vaccine expense coming up,” says a government official.

“While some rationalisation will be part of the Budget, the remaining will take place later. We have identified the schemes as part of the exercise. We are consulting the concerned ministries and departments,” the official adds.

Reacting to the proposal, Kerala Finance Minister Thomas Isaac says a rationalisation move without increasing the devolution share is completely unacceptable and he would take the matter up with Union Finance Minister Nirmala Sitharaman.

The Centre, Dr Isaac says, should in that case give untied grants to the states or under broad sectors where states can come up with their own schemes.

“This is a ploy to reduce funds to states,” asserts Dr Isaac.

“They have no intention of giving the funds as grants to states or under broad sectors where states should form their own schemes,” he says, adding that the proposal must be discussed with states first.

Cutting down CSS will result in reduction in funds to states, already fiscally strained, according to Dr Isaac.

“With the Centre not spending more, states are under grave pressure to spend,” the Kerala finance minister points out. “So reduction in CSS without concomitant assurance of weighted transfers or formulation of new CSS which will be broad enough is not acceptable.”

Punjab Finance Minister Manpreet Singh Badal says these schemes were for creation of infrastructure in the country.

“It is just an excuse to say that the Centre has run out of money. It these were such a frivolous expenditure, why were such schemes started in the first place. Pruning these would mean hard time for the people of India,” argues Badal.

States have pitched for an increased devolution to 50 per cent from 42 per cent in case the Centre rationalises CSS.

Although the CSS was rationalized in 2015-2016, the devolution to states was increased from 32 per cent to 42 per cent.

“The Centre has bypassed the increased devolution by various means like imposing cess on fuel instead of direct excise duty, which would have been shared with states. But at least an effort was made. This, however, will be totally unacceptable,says Dr Isaac. While there are 30 centrally sponsored schemes, there are 685 central sector schemes such as interest subsidy for short-term credit to farmers, fertiliser subsidy and food subsidy, employment guarantee schemes and PM Awaas Yojana.

The Union government supports several developmental initiatives at the state level through these scheme as they are aimed at supplementing states’ efforts.

While the Union government fully funds the central sector schemes, centrally sponsored schemes are jointly funded by the Centre and the states.

There are six core of the core schemes that are the most important for the central government, including the National Social Assistance Progamme and Mahatma Gandhi National Rural Employment Guarantee Programme.

In the 2015-2016 Budget, the Centre had decided to delink eight centrally sponsored schemes including the national e-governance plan, backward regions grant funds and moderniWtion of police forces from its support.

The sharing pattern was changed for 24 CSSs with states having to contribute a higher share, while 31 continued to get full central sponsorship.

‘After all, we cannot overlook the fact that the total public outlay on the centrally sponsored schemes are close to Rs 6 trillion-Rs 7 trillion of which about Rs 3.5 trillion comes from the central government alone — a much deeper rationalisation and synergy in these would be necessary,’ Singh said.

Nearly a dozen US Army soldiers were poisoned after drinking a chemical found in antifreeze, believing it was alcohol
Technology