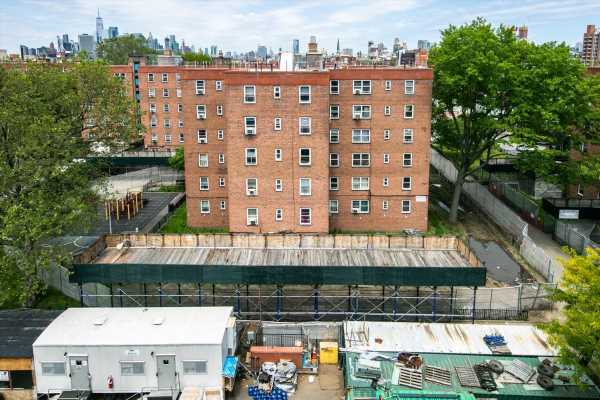 In the recovery period after the 2008 recession, opportunistic investors scavenged cities and towns across the U.S. for parts, scooping up foreclosed homes. By 2016, U.S. homeownership rates had fallen to 62.9 percent, thelowest rate since 1965. The coronavirus pandemic could leave similar scars — and new ones — housing advocates have warned, as job loss and expiring eviction moratoriums reshape local markets.

“If we want things to go differently this time, we need to move quickly,” Brad Lander, a New York city council member, wrote in an op-ed in the New York Times in September.

Lander is now running for the citywide position of comptroller against a slate of four other Democratic candidates, and as part of his campaign he’s pitching an alternative future for a post-pandemic NYC — one that uses city resources to keep low-income residents housed in the midst of economic crisis. In a proposal unveiled on Wednesday,Lander laid out a plan to annually acquire 15,000 new units of social housing — a term he defines as both rental and cooperatively owned homes that are “democratically owned, permanently affordable” and “removed from for-profit speculation.” The proposal includes both shoring up public housing stock and creating a broader bank of facilities like resident-owned co-op buildings and mutual housing associations — leaning not on private developers, but on nonprofits and community land trusts to build and manage them. In all, he sets a goal of building 154,000 new units and preserve 388,000 units of social housing in the next decade.

The vision aligns with other figures from the Democratic Party’s progressive wing, such as Minnesota House Representative Ilhan Omar, whose Homes for All Act would jumpstart a national building spree of 12 million affordable rentals and public housing units. It has less in common with other trendy housing affordability models, such as President Joe Biden’s push to provide more rent vouchers to low-income tenants, or the method favored by cities like Minneapolis and states like Oregon, which have changed land use regulations to allow for more housing of all prices to be built in a process known as upzoning.

It will take more than the power of one comptroller to achieve any of these dreams, however. As City Hall’s money manager, New York’s comptroller reviews the city’s contracts and has some ability to set its overall financial agenda, but to change policy or pass a budget, one would need mayoral and city council buy-in. Other candidates, likeState Assembly member David Weprin andState Senator Brian Benjamin (an affordable housing developer himself), have said they would increase affordable housing in the city using a mechanism under the full purview of the comptroller: the city’s public pension fund. With housing affordability set to play a big role in New York City’s closely-watched 2021 elections, the competing proposals could be influential factors in the races.

So far, Lander has won early praise from housing advocates like Ismene Speliotis of the Mutual Housing Association of New York, Jonathan Westin of New York Communities for Change, and former gubernatorial candidate Cynthia Nixon. “For far too long New York City has relied on a market-based, trickle-down, transactional approach towards affordable housing that has clearly not worked to resolve the ever-increasing need for affordable housing that has now resulted in a homeless and housing affordability crisis of epidemic proportions,” Speliotis said in a statement. “Focusing resources based on need and in partnership with not-for-profit developers and community residents is the right approach and long overdue.”

As Speliotis highlights, Lander’s plan would be a repudiation of the affordable housing approach favored by every NYC administration since that of Rudy Giuliani in the latter half of the 1990s, which “has been overwhelmingly put in the hands of for-profit housing developers,” Lander said. Between 2015 and 2018, nearly 80% of city’s affordable housing subsidies went to private developers, according to a study by the Association for Neighborhood and Housing Development; the study found that in New York, nonprofit developers have tended to build more deeply affordable housing than for-profit developers. “That isn’t working,” Lander said. “That wasn’t working before pandemic, it isn’t working now. It doesn’t create housing where the need is greatest.” Under Lander’s plan, half the city’s subsidies would be earmarked for nonprofit developers.

The price tag? On top of the city’s current annual capital spending of $1.5 billion on affordable housing, Lander’s plan would require an additional $1 billion to fund New York’s Department of Housing and Preservation, and $1.5 billion more to the New York City Housing Authority, along with a $1.5 billion match from the state. These numbers are benchmarked from a United for Housing proposal, advanced by a coalition of local advocates.

Such an investment is a tall order for a city that is facing a projected $4 billion budget gap. And critics warn that NYCHA’s issues go deeper than insufficient funding. The New York City Housing Authority is the largest in the U.S., running 180,000 units of public housing, but it’s long been plagued withadministrative, maintenance and safety issues like broken elevators, roach infestations and lead paint. “The plan calls for more funding for NYCHA without acknowledging that NYCHA already spends more than is typical for multifamily landlords, with very poor results,” said Emily Hamilton, senior research fellow and director of the Urbanity Project at the Mercatus Center at George Mason University, in an email. She also noted that though he pledges to continue “aggressive and thoughtful oversight” of the authority, Lander’s plan doesn’t include specific “technical or institutional reforms to improve NYCHA’s service to its tenants.”

To Lander, preserving affordable housing means not only ensuring that NYCHA-run public housing units are safe for tenants to live in, but protecting existing social housing, like the 69,000 Mitchell-Lama housing cooperative units that are HPD-operated and owned by residents, from future privatization. He’d also expand the city’s use of the community land trust and shared equity homeownership model, which helps low-income families build wealth while keeping homes affordable in relative perpetuity. The trade-off for a low down payment is that once they move in, owners can’t flip their homes for a significant profit — instead, the owner gets a limited return each year, and the home stays below market rate for future buyers. Where they’re utilized, these programs have typically been small; Lander wants to spend $580 million a year to create 4,000 shared-equity units citywide, making them an option to families making 50% to 100% of the area median income.

Other strategies build on Lander’s work as a city council member. He’s already introduced legislation to ensure that nonprofits will be given all contracts to build new housing developed on land owned by the city — a departure from the de Blasio administration, which gave three-quarters of such contracts to for-profit developers, according to the Association for Neighborhood and Housing Development. (The consequences of that imbalance could soon become clear, as restrictions keeping more than 200,000 of those units affordable are slated to expire between 2017 and 2037.)

City council is also advancing a bill to create a city-run land bank, a tool that’s been used in cities like Syracuse and Cleveland. In New York City, Lander argues, a land bank could streamline the city’s ability to acquire properties that might otherwise stay vacant or be bought by private investors. Such a bank could start by buying out hotels that are at risk of closing due to tourism lost in the pandemic — an estimated 10% to 20% of NYC’s total — and converting them into supportive housing for some of New York’s nearly 80,000 unhoused residents. After a hearing on the proposal last week, the bill still would need to get the approval of the council and de Blasio, whose administration has been resistant. Current comptroller Scott Stringer is one mayoral candidate who has espoused the model; he released a 2016 report suggesting that the city could use a land bank to develop 57,000 units of housing on vacant lots the city already controls.

To sustain the land bank, New York could end the Giuliani-era policy ofselling the tax liens taken on homes whose property tax bills were overdue to a private trust, an uncommon strategy that Lander argues is harmful, jacking up interest rates and disproportionately eroding the ability of Black homeowners to buy and keep property. Instead, Lander proposes transferring those liens to the city’s land bank, and shifting homes whose owners still can’t keep up with a payment plan into community land trust ownership.

The 10 fastest-growing workplace apps of 2020, according to $33 billion Okta