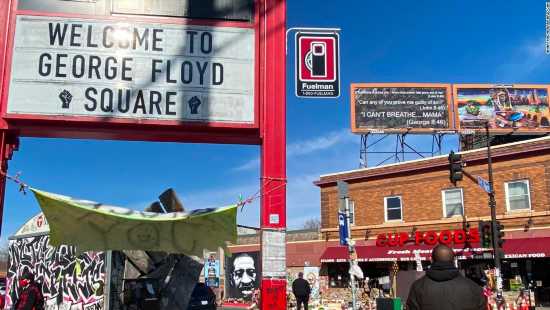 Sorrow flows through community at scene of George Floyd's death

Minneapolis (CNN)Walking up to Cup Foods, you pass the outline of a body drawn on the street. It shows where George Floyd took his last breath.

Approaching it now, it’s impossible not to see again the horrified huddle of people captured on police body camera screaming at officers to get off the neck of George Floyd. It’s impossible not to remember the sea of flowers and anger that sprang up after the video of the fatal encounter taken by one young woman became public. 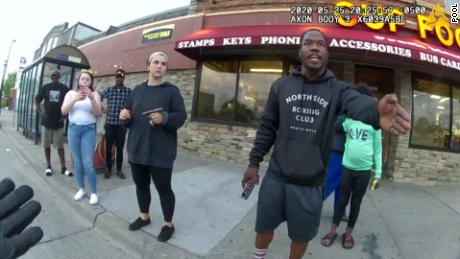 Cup Foods, with its red awning promising everything from phones to organic milk to T-shirts, has been a part of this South Minneapolis neighborhood since 1989 — part grocery store, part convenience store, part restaurant. Then it became where George Floyd and a counterfeit $20 bill led to a call to police that ended with Floyd dead, and it was propelled into the national and global spotlight.
With videos taken inside and outside the store, its aisles and customers are now known around the world. Cup Foods and the surrounding community are now linked forever to Floyd and racial injustice in the United States.
Yet Cup Foods is still open for business, selling batteries, a pack of gum or a bag of spinach. 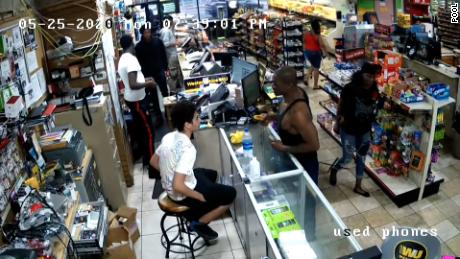 Once inside, you see the aisle where Floyd chatted with another customer and staff before asking to buy a pack of cigarettes. It’s a scene that was replayed in court in the trial of the man accused of killing him, former Minneapolis Police Officer Derek Chauvin. And jarringly, even if expected, Chauvin’s trial is being played on Cup Foods’ in-store TVs.
Floyd was known inside Cup Foods well before the two became inextricably linked.
“He would come in once or twice a week,” owner Mahmoud Abumayyaleh told CNN. “We knew him well enough to joke around with him. He was always pleasant, always smiling, never had an issue with him.” 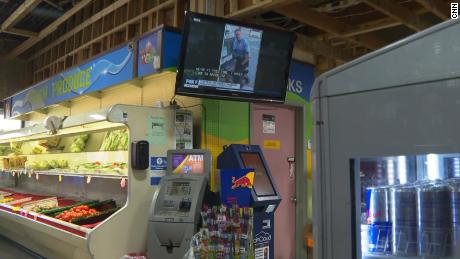 Of course there was an issue with him last Memorial Day, May 25, when clerk Christopher Martin looked at the $20 bill Floyd had given him and realized it was counterfeit.
That discovery set off a chain of events that still haunts Martin. One that makes him feel guilt and regret for simply doing the job he was trained to do: check for counterfeit bills. He testified in court, three miles or so north of the store, that he’d been trained it was store policy for the value of any fake bills to taken out of your paycheck. 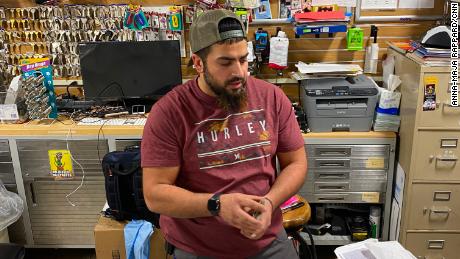 Abumayyaleh and the other owners say they got some grief after that testimony about their store policy, which would be illegal. He told CNN they never actually docked anyone’s pay, while showing a sheaf of counterfeit bills encountered in the store.
He said they hire a lot of teenagers for their first job, and try to teach them responsibility and to take their work seriously. Fake cash hurts the business and he says he just wanted employees to understand that.
It’s far from the first tension felt at Cup Foods. It’s found itself a focal point of love and hate. Hate for the catalyst it became in the events that led to Floyd’s death. Anger for when it reopened weeks later. And love for its place in the community, a vital oasis of supplies and services at 38th and Chicago in what would be a food desert. Love, too, from far away for the teenage clerk Martin and the weight of his conscience. The store has received letters and calls of support from across the US and even further afield since his televised testimony. 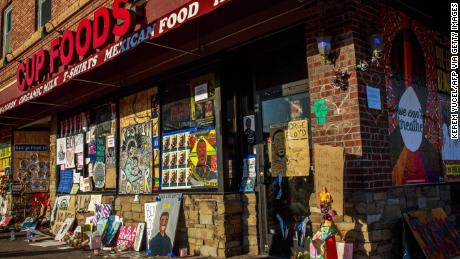 Abumayyaleh wears a gun on his right hip. He said it’s something he’s done since he was legally allowed to at the age of 21. It’s not because of Floyd, it’s because he’s also the de facto security guard in a store in a neighborhood that’s no stranger to violence.
Before Floyd’s death and after Floyd’s death, there have been murders on the streets, gang activity and fights.
Everyone here knows the history, good and bad, and no one shies away from it.
That’s one reason the trial is on TV inside Cup Foods, every day, gavel to gavel. 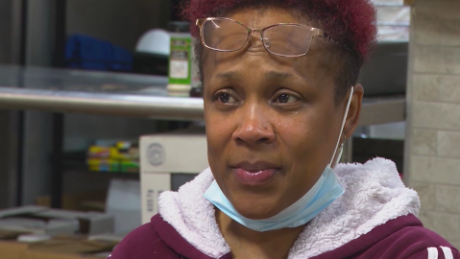 Tracie Cowan came from the north of Minneapolis to get her phone fixed one day during the second week of the trial. She was glued to the screen as she bit down on fried catfish waiting for the repairs to be done.
“It’s sad. It’s so sad, and it’s really sad to watch it in the raw,” Cowan said.
Her small dog named Adore sat snuggled up on her shoulder like a baby that needing comforting. Cowan needs the comfort too. It doesn’t take much to bring up the raw emotion inside of folks around here. Scratch the surface and sorrow floods out.
“The sad part is that somebody could actually do this to another human being,” Cowan said as tears flowed down her cheeks. 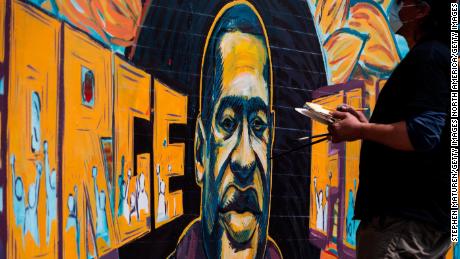 Back outside, the name and face of George Floyd are everywhere. Painted in bright colors on the store itself. Painted in black and white on a huge mural outside where a greenhouse has been set up to grows fresh flowers for the memorial. His memory lingers on the tongues of those who knew him and those who did not.
The outline of his body has been painted in blue and white and given angel wings. It is surrounded by candles, replaced regularly to make sure there is always light. Floyd’s girlfriend Courtney Ross placed her candle there the night before she testified. 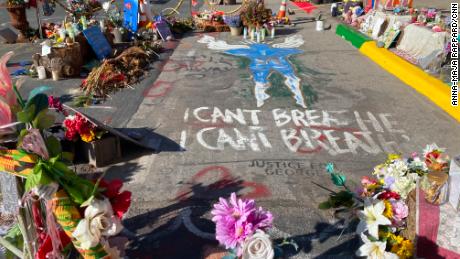 What’s now known as George Floyd Square is taking on the global significance of the Tallahatchie River in Mississippi where Emmett Till’s body was found or the Los Angeles street where Rodney King was beaten.
A few feet from the candles, Jay Webb towers over a garden he built in the middle of the intersection of 38th Street and Chicago Avenue. Concrete blocks filled with soil surround a statue of a clenched metal fist made by a local artist. Webb said he need to grow beautiful things in a place that had seen too many lives wilt. 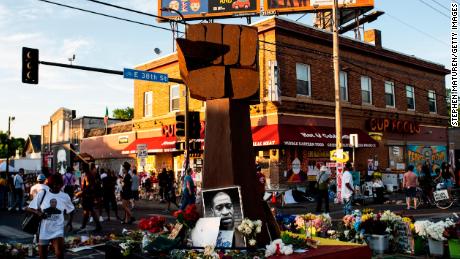 The death of Floyd pierced his heart and motivated him to act, he said. “We’re not going to react. We’re going to respond,” he said. 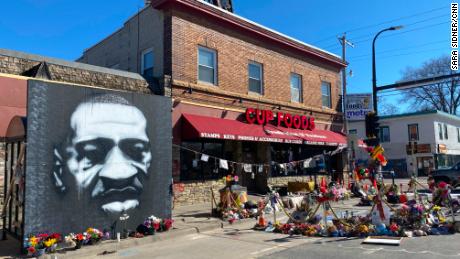 A former professional basketball player in Spain and the Czech Republic, Webb has lived all over the world and knows the ebbs and flows of a fast-moving game.
Now home, as a black man in America, he says he has a duty to help create a world that is filled with hope, beauty and peace, not rage and division.
Outside Cup Foods, that division is never far away. Unlicensed concrete barriers seal off the area, making some feel like hostages in their own neighborhood. They call for the barriers to go, while others insist they stay, lest people forget too soon.
Cup Foods is situated in an ocean of human sorrow but buffeted by winds and waves of hope. 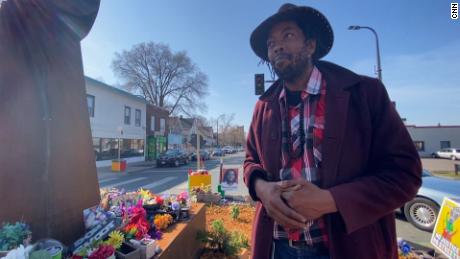 Webb, the gardener, all 6 feet, 9 inches of him, wants to be that hope. Music plays as he tends his garden beds, built with a purpose to do good even in the face of the deaths that have happened just feet away.
“This is our response,” he says, tears streaming down his face. “Do your worst. And we’ll do our best.”
Source: Read Full Article

U.S. Stocks Move Back To The Downside After Seeing Initial Strength