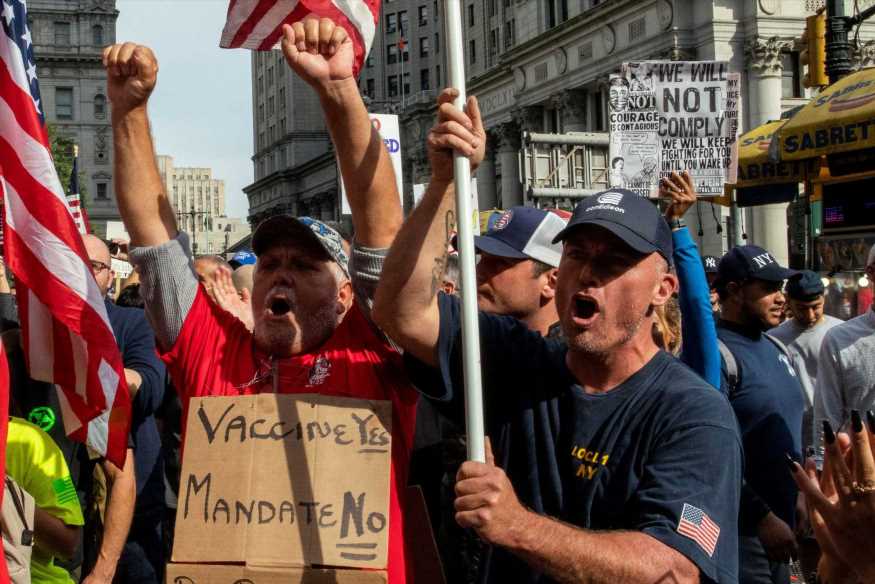 Some 5% of unvaccinated adults quit their jobs over Covid vaccine mandates, survey shows

Five percent of unvaccinated adults say they have left a job due to a vaccine mandate, according to a survey released Thursday by the Kaiser Family Foundation.

This early read on whether workers will actually quit their jobs over mandates comes as more employers are requiring shots. One-quarter of workers surveyed by KFF in October said their employer has required them to get vaccinated, up from 9% in June and 19% last month.

President Joe Biden announced in September a mandate for businesses with 100 or more employees to ensure workers are vaccinated against Covid or tested weekly for the virus. The mandate, which is currently still under review, is estimated to cover roughly two-thirds of the private-sector workforce once it's implemented. The Kaiser survey only asked whether people have quit over a vaccine requirement, not a vaccine requirement with a testing option.

More than a third of unvaccinated workers said they would quit rather than comply with a vaccine or testing mandate, the Kaiser survey shows, a share that jumps to 72% if no testing option is offered. But because the nationwide mandate has yet to be officially implemented by the Labor Department, it remains to be seen what share of workers will quit when a broader swath of the U.S. workforce is covered.

"Right now only a quarter of workers say that their employer has required them to get a vaccine, so it's still quite hypothetical for these workers who say they would leave their jobs," said Lunna Lopes, a senior survey analyst with the Kaiser Family Foundation. Still, Lopes said, the survey results offer "a sense of people's attitudes" toward the requirements.

Workers already covered by a mandate are more likely to have higher household incomes, identify as Democrats, and already be vaccinated, the data shows. The survey results also illustrate the ongoing partisan divide toward Covid-19 vaccines, with 32% of Republican respondents reporting they know someone who has quit over a mandate compared to 14% of Democrats who said the same.

U.S. business groups have pushed back against the forthcoming mandate, asking the White House to delay the rule until after the holiday season.

"We're totally in favor of the vaccine, we've distributed the vaccine, we've spent millions incentivizing employees to get the vaccine," said Ed Egee, who works on government relations and workforce development at the National Retail Federation, a retail trade association. But Egee said putting employers in the middle of a discussion that is "contentious and political whether we like it or not" is going to create significant implementation challenges, and risks the potential of staffing shortages heading into the holidays.

The NRF has asked the White House for a 90-day implementation period once the rule is finalized, Egee said, to allow time to verify employee vaccination status, consider requests for exemptions, and figure out plans for weekly testing.

When asked about survey data indicating a small share of adults have left their jobs over mandates, Egee noted that there is likely to be significant geographic variation behind the national numbers. Employers in the South and Mountain West are likely to see higher rates of worker resistance, he said.

The National Association of Manufacturers, in a letter to the federal government last week, said that losing even a small share of workers could have significant consequences for some of its member companies.

"At small facilities with barely more than 100 employees in particular, the departure of even one highly valued team member could lead to production challenges if not managed or planned appropriately," wrote Robyn Boerstling, a top lobbyist for the manufacturers' group. "For larger companies, even losing 1% of a production team could have operational consequences given the specialized nature of a skilled manufacturing worker."

An internal survey from the American Trucking Associations estimates that carriers subject to the mandate would lose about 74% of unvaccinated employees, or 37% of their total workforce, to retirements, resignations, or employees switching to work for smaller companies not covered by a mandate. That survey assumes, however, that the share of respondents who said they would quit will do so when the time comes, the trade group said in a letter sent last Thursday to the Office of Management and Budget, which is reviewing the rule for the White House.

When asked whether drivers are actually leaving the workforce already, Jeremy Kirkpatrick, the association's director of strategic communications, said that it's too early to tell because the rule hasn't been made public yet.

"We're in a wait and see mode right now," Kirkpatrick wrote in an email to CNBC.

The Kaiser survey also indicates that most unvaccinated workers would not quit outright if faced with a mandate. About six in ten said they would be likely to apply for a religious, medical, or other exemption if their employer required them to get a vaccine.

"There's a lot of options that people would try to exhaust before leaving a job," said Lopes, the KFF analyst.

Nearly 58% of the U.S. population overall is fully vaccinated, according to the Centers for Disease Control and Prevention, including nearly 70% of adults.