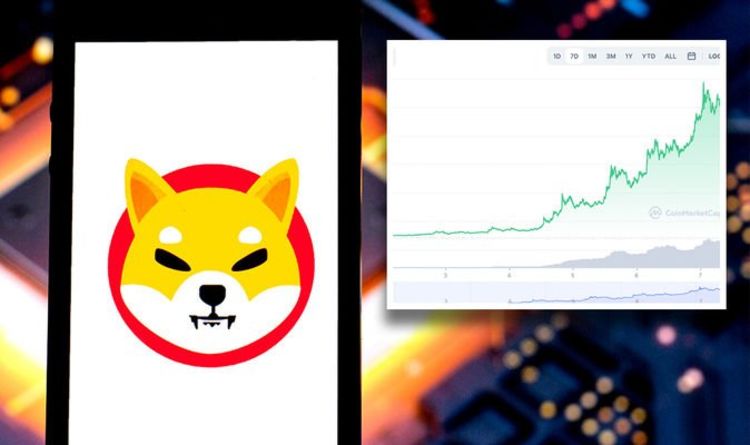 However, experts are cautioning it could be “impossible” for SHIB to hit $1.

Don Guo, CEO of Broctagon told Express.co.uk: “While it is an interesting sentiment, it is impossible for Shiba Inu Coin (SHIB) to reach $1.

“The reason behind this is that there simply isn’t enough money in the world to do so – in order for SHIB to reach a dollar, it requires a market capitalisation of one quadrillion US dollars.

“In comparison, the entirety of the US National Debt is $23.3 trillion – and even that staggering sum constitutes less than three percent of the amount required for SHIB to reach that price point.”

“Given current trends, it is more likely that Shiba will remain within its ballpark of less than a fraction of a cent.”

SHIB is the self-confessed DOGE killer, and both cryptocurrencies are based on the 2014 Doge meme.

Mr Guo explained: “With DOGE’s market capitalisation reaching $32.3 billion, it is far more likely for SHIB to reach this price, which translates to around $0.000065 per SHIB.

“At current prices we can expect an upside of close to 200 percent.

“If we were to compare to DOGE’s peak price, we can even expect to see an upside of close to 600 percent – this will bring SHIB’s market capitalisation to more than $69 billion, making it rank higher than the USDT and make it the third-ranking crypto only behind Bitcoin and Ethereum.”

Classed as a ‘memecoin’ SHIB and DOGE were born of the doge meme, which features a picture of a shiba inu dog and short phrases.

Despite frequently trending on Twitter and being pushed by celebrities, Mr Guo warned: “SHIB’s status as a memecoin may very well also be its bane.

“As with all memecoins, SHIB’s price activity is heavily dependent on influencer opinion.

“We have seen this play out during many price upheavals of DOGE – a simple tweet by Elon Musk can change the markets almost overnight.”

The recent surge in SHIB has come after Musk tweeted pictures of his own Shiba Inu puppy.

The latest to his 60.5 million followers on October 4 was captioned “Floki Frunkpuppy” and featured his dog in a Tesla.

Mr Guo added: “While it has mostly worked favourably for SHIB thus far, it’s not a stretch to imagine a world where the inverse happens.

“That uncertainty combined with the fact that investors of SHIB are also largely speculative in nature contributes greatly towards its volatility and in turn distrust from the markets.”

'Record-setting prices on virtually every category': How to invest in a booming collectibles market

Crypto Activity Is Exploding in Asia Despite China Actions
Technology