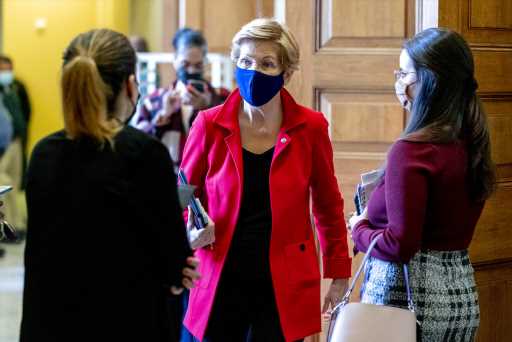 Corporations that report more than $1 billion in profits would have to pay at least 15% in tax under a proposal that could end up in the Build Back Better Act, the cornerstone of President Joe Biden’s agenda.

The backers of the proposal, Sen. Elizabeth Warren (D-MA), Sen. Ron Wyden (D-OR) and Sen. Angus King (I-ME) outlined some of the details on Tuesday as Democrats wrangle over how to pay for the Build Back Better Act, which would expand the social safety net and programs to combat climate change.

Studios and media companies, along with lobbyists across industries, have opposed Biden’s proposal to raise the corporate tax rate, currently at 21%. But that tax hike plan appears to be dead, as Sen. Kyrsten Sinema (D-AZ), is against increasing the corporate rate and rates on high income earners.

Yet on Tuesday, she expressed support for the three senators’ proposal, saying that it “represents a commonsense step toward ensuring that highly profitable corporations — which sometimes can avoid the current corporate tax rate — pay a reasonable minimum corporate tax on their profits, just as everyday Arizonans and Arizona small businesses do.”

In making the case for a corporate minimum tax, the senators singled out Amazon, noting that it paid 4.3% in federal tax on the $45 billion in corporate profits over the past three years. “In fact, in 2018, Amazon didn’t pay any federal income tax at all,” the senators said in their outline.

It’s not completely clear how a 15% minimum tax would impact major media companies, given that more of the details of the proposal need to be worked out, including the value of such things as deductions and write offs.

In the most recent fiscal year, Comcast, Netflix, ViacomCBS, Discovery and Fox Corp. all reported net profits above $1 billion. The Walt Disney Company reported a loss due to the shut down of theme parks due to Covid-19.

The content and media companies also have had varying effective tax rates, which factor in deductions and state and local taxes. Comcast, for instance, had an effective rate of 23.9%, while Netflix was at 13.69%, according to their financial reports.

The senators said that their proposal would apply to about 200 companies and raise hundreds of billions in revenue over 10 years. They want to retain tax credits for such things as research and development, as well as for taxes paid to foreign countries. The proposal also would allow companies to carry forward losses and claim a minimum tax credit against regular tax in future years.

Studios and media companies were among the corporate entities that lobbied heavily for a reduction in the corporate tax rate in the tax reform plan passed by in 2017, a central part of President Donald Trump’s agenda. It dropped the corporate from 35% to 21%, a huge reduction meant to spur economic growth. But Democrats have argued that the tax reform plan’s predicted boom in business investment never materialized, with tax savings going to shareholders.

The Build Back Better Act is a $3.5 trillion proposal that would have included two free years of community college, child care and universal pre-Kindergarten, along with an expansion of Medicare to cover dental, hearing and vision, among other proposals. It also includes a number of initiatives to combat climate change, including one provision that would pay utilities that shift to clean energy. But the legislation is being significantly scaled back due to the opposition from Sinema and Sen. Joe Manchin (D-WV), as Democrats have no votes to spare in the 50-50 Senate. The White House and Democratic leaders want to reach an agreement on the legislation by the end of the week.

Jill Goldsmith contributed to this story.