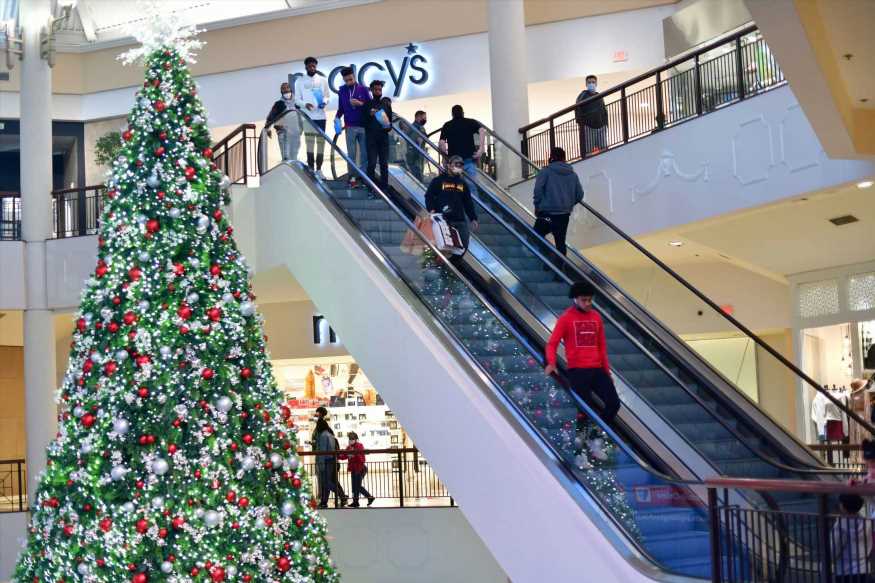 Is it beginning to look a lot like Christmas? Perhaps not, this year.

With 24 days until the big holiday, retailers hope consumers will keep spending. Shoppers started purchasing holiday gifts early this year, but the Thanksgiving weekend shopping events, from Black Friday to Cyber Monday, weren't as strong as some had hoped.

Although analysts expect retail sales will hit lofty expectations, there is a lack of holiday buzz, according to Deborah Weinswig, founder and CEO of Coresight Research.

"Typically, people are like 'How's your holiday shopping going? What are you getting so-and-so?,'" she said. "I feel like some of that we don't have this year — and I'm not sure why it is."

She said that could be due to consumers feeling distracted by the return of family gatherings and bigger parties, disenchanted by inflated prices or more measured about their shopping approach as they work ahead to avoid out-of-stocks and shipping delays.

And while she anticipates that retailers will put up a solid performance, she said it will be interesting to see how much of that comes from inflation and more merchandise that is bought at full price rather than an increase in volume sold.

'Halftime' instead of the kickoff

Retailers including Amazon, Walmart and Target blasted holiday deals and Black Friday-style promotions as early as October. Consumers had other motivators this holiday season to buy gifts early, too. Instead of chasing deep discounts or nabbing the hot, must-have gift, many had fears of not finding anything worth buying because of supply chain woes. For months, shoppers heard about temporarily shuttered factories, congested ports and a shortage of truck drivers.

That wave of early shopping may have stolen some of the thunder from major shopping holidays, including Black Friday and Cyber Monday. The total number of shoppers and average spending dropped during Thanksgiving weekend, which spans from Thursday to Cyber Monday, according to the National Retail Federation. Nearly 180 million Americans shopped during the five-day holiday weekend compared with about 186 million shoppers in 2020 and about 190 million in 2019, the trade group said.

Consumers spent $10.7 billion on Cyber Monday, marking a 1.4% decrease from year-ago levels, according to data released Tuesday by Adobe Analytics. That is the first time that Adobe has tracked a slowdown in spending on major shopping days since it started reporting on e-commerce transactions in 2012. However, it comes after last holiday season when spending on the shopping holiday grew by 15.1% versus 2019.

The price point of shopping carts rose by nearly 14% on Cyber Monday — and 19% for the holiday season overall — as some shoppers bought big-ticket items like furniture and others felt the pang of inflation, Adobe said.

NRF CEO Matt Shay said early shopping has shaken up the role of peak sales days. Consumers started buying gifts, decor and more in October a year ago to avoid crowds. This year, supply chain concerns pushed up that timetable once again.

"The Thanksgiving weekend and Black Friday, in particular, are closer to halftime now than the kickoff," he said.

Shay said NRF stands by its forecast for a record holiday season. The trade group projected spending in November and December will rise between 8.5% and 10.5%, for a total of between $843.4 billion and $859 billion of sales.

Holiday retail sales have risen by 4.4% on average over the past five years, NRF said. Last year, they hit an all-time high of $777.3 billion, which represented a 8.2% year over year jump.

Steve Sadove, former chairman and CEO of Saks and a current senior advisor for Mastercard, said he expects a strong season for the retail industry. He points to pent-up demand among consumers who have higher levels of savings.

And Sadove reiterated that expectation even after some data showed Black Friday and Cyber Monday demand tapering from each of the past two prior years. Mastercard sees particular strength in the luxury space, jewelry and apparel, compared with 2020 and 2019 levels.

"Clearly, it's been a spread out season," he said. "Retailers started their promotions early. Black Friday wasn't about just that day."

A new variant and scarce deals

To hit high expectations, retailers will have to overcome fears of the new strain of the coronavirus, nudge shoppers to buy despite scarce deals and fight off a potential December lull.

News of the omicron variant broke just as Black Friday shoppers geared up for store visits.

Some shoppers have run into unavailable items. Out-of-stock messages surged by 169% in the month of November compared to pre-pandemic levels in January 2020, according to data from Adobe Analytics. They are more than triple (258%) the levels of November 2019.

And discounting has been lackluster — even on shopping holidays. On Cyber Monday, for instance, discount levels for electronics were 12% off versus 27% last year, TVs were 13% off versus 18% last year and appliances were 8% off versus 20% last year, according to Adobe.

Those discounts are expected to fade even more and settle into the 5% to 10% range in the weeks ahead, the company predicted.

NRF's Shay said the omicron variant could actually lead to more sales for retailers. He said some consumers who had planned to book a trip, buy theater tickets or give another experiential gift may opt for goods instead.

And even as public health officials and consumers learn more about the variant, he said "there's no need to panic." He said the backdrop looks very different this holiday season, thanks to the majority of Americans being fully vaccinated.

"We remain confident that we will continue to have a very positive trajectory in the overall economy and specifically, the retail industry, for this holiday season," he said.

A wave of early shopping could increase the risk of a December lull, said Craig Johnson, founder of the consumer research firm CGP.

The December lull in the retail industry refers to those few weeks after Black Friday and Cyber Monday and before the final days leading up to Christmas Eve when consumers may feel shopped out and decide to put their wallets aside for a pause in spending.

Johnson said he has tracked the lull for more than a decade. As retailers pull promotions earlier and earlier into the season, they can steal sales from later in the season without increasing overall demand, he said.

"People are either de-energized or they're taking a breather," he said.

According to his company's estimates, U.S. retail sales online and in stores on Black Friday totaled a record $34.9 billion, up 18% from a year earlier and up 12% from 2019. It is forecasting sales for the entire holiday season, including November and December, to be up 6.7% year over year.

He said two wildcards — the omicron variant and the rise of smash-and-grab crimes — could spook customers from returning to stores. In recent weeks, Best Buy, Nordstrom and Louis Vuitton have all been targets of organized retail crime.

"That puts a damper on everything," Johnson said. "There could be an exacerbated December lull if that activity keeps popping."

Extended discounts, shoppable events and new merchandise are among the ways that retailers aim to grab attention and sustain momentum.

The day after Cyber Monday, Rent the Runway sent an email to potential customers saying its one-day-only sale had been extended for another day. Fashion retailer Rebecca Minkoff's marketing email blasted out on Tuesday read: "Surprise! It's Cyber Tuesday!" And department store chain Saks Fifth Avenue and athletic apparel maker Bandier joined the list of retail businesses prolonging their holiday promotions into later in the week.

Target will debut a limited-time collection of nearly 300 Lego-themed items in early December on its website and in stores. It will include colorful clothing, home goods, pet accessories and more. The big-box retailer has a long history of using short-term collaborations with brands, such as Hunter, Lilly Pulitzer and more, as a way to drive foot traffic and web traffic.

And Walmart will have more than 30 livestreaming events over the holidays to point out products people may want to add to the gift list.

Delayed shipments: A blessing or a curse

Delayed shipments could be a blessing in disguise for some retailers, if they receive inventory in the next week or two that could freshen up store displays and fill up emptying shelves, Johnson said.

"There may be a silver lining that alleviates some of the early December lull issues," he said. "But I think the risk is still more to the downside than the upside."

Retailers could lure some people back to spend more money if they clearly communicate about new inventory or new deals, said Adam Pressman, a partner at retail consulting firm AlixPartners. Not everyone will have the flexibility to expand their budgets, he said, but some consumers do.

"Customers who were buying in early October versus potentially the end of November might be open to additional purchases or other things that are coming back into stock," he said.

Mastercard's Sadove said the biggest challenges could come after the holidays. Retailers may receive adelayed shipments of inventory that is out of season, and wind up with a glut of items. That would trigger a higher level of markdowns.

"The supply chain could mess things up quite a bit," he said. "Let's say you're a retailer that has Christmas trim that comes in February."

Brit backpacker, 18, savagely attacked by crocodile while rafting in Africa