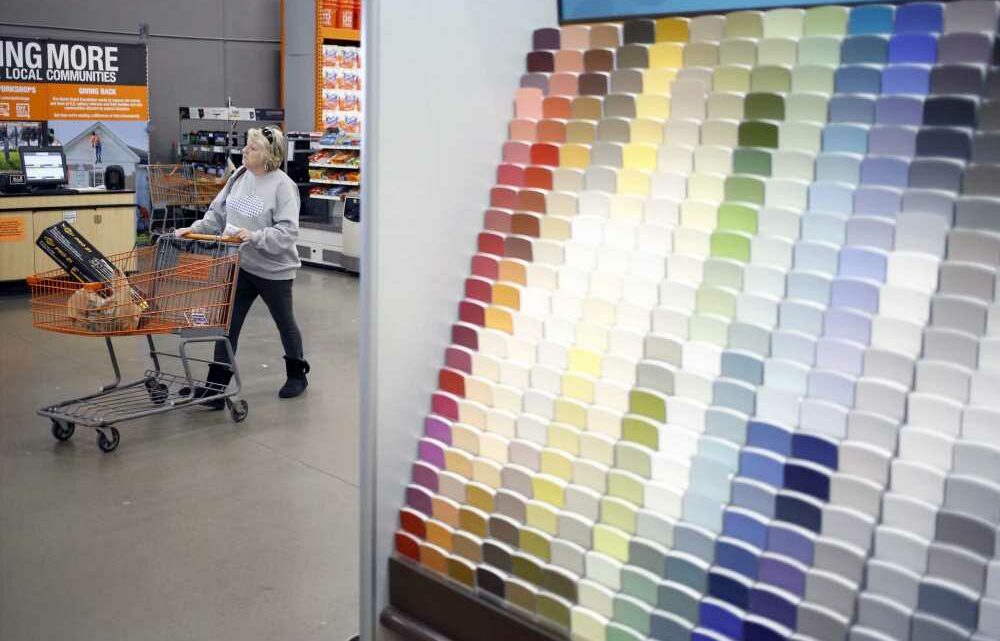 Paint is getting costlier and harder to find, and this could just be the beginning

Home improvement is getting even more aggravating as a lack of supplies and higher prices are making life more difficult for do-it-yourselfers.

Take paint, for instance – if you can find it, and afford it.

A confluence of factors, from an unusual freeze earlier this year in Texas to surging demand to ongoing supply chain issues, has created a paint shortage and a price surge.

Customers around the country are finding it tougher to get the paint they want as store owners struggle to keep product on the shelves and meet rising costs from their suppliers.

"We've had multiple price increases across the board from every manufacturer we deal with," said Randy Moser, owner of Buss Paints, a specialty store in Emmaus, Pa., about 53 miles north of Philadelphia in the Lehigh Valley. "It's been this way for a while now, and it seems like it's not going to get any better over the next three to six months, either."

The Covid-19 pandemic spurred a wave of new interest in projects around the house. From sprucing up the garden to adding swimming pools to throwing on a fresh coat of paint, retailers have faced a torrent of demand for goods.

That in itself has stretched supplies and boosted costs, but it's been more than that.

The deep freeze in the South slowed production of petroleum, a critical ingredient for paint. Shortages of other goods have clogged up supply chains, all while the demand for Chantilly lace, tricorn black and green smoke – to name three of the most popular colors – has abounded.

Sherwin-Williams is the largest paint manufacturer in the U.S. with $18.4 billion in annual revenue. Company officials have been candid in investor calls that they foresee additional "pricing actions" to cope with rising input costs.

"The pace at which capacity comes back online and supply becomes more robust remains uncertain," Young added. "We have been highly proactive in managing the supply chain disruptions to minimize the impact on our customers."

Prices, though, are rising and supplies are getting tougher to come by.

Businesses are trying to cope

Producer prices for painting and coating manufacturing rose 10.6% in August from a year ago, the biggest annual jump since January 2009. That was part of a broader boost in the producer price index, which rose at an 8.3% annual pace for the month, the sharpest increase in the metric's history back to 2010.

At the same time, sales totals at paint and wallpaper stores were up 7.8% annually in June to $1.34 billion. The pace of sales increases has slowed since reaching an all-time high in April but is nevertheless robust.

Doing business from his store in Pennsylvania, Moser has felt the cost increases in multiple ways as demand remains.

"Sure, it has impacted us, in the sense that just certain products you can't get. So you start selling certain products and then you've got to switch to another one," he said. "Since the pandemic started, so many people have been painting and doing home construction along with all the other construction going on. Things were just where you couldn't handle the amount of inventory that was being pulled out."

Smaller stores have been feeling the pinch in a way that big-box retailers have not.

Robert Muhammad at 4 Seasons Paint Store in Brooklyn, N.Y., said some of the bigger companies prioritize larger stores and snub smaller retailers with product availability tight. Muhammad said some of the larger manufacturers are pressing stores to sell only their products or face being cut off.

"It's really hard for small business," he said. "What are you going to sell people? The people who we're looking for supply from now are only supplying the big stores."

For consumers, it could all spell trouble in the days ahead. Paint could continue to be scarce and costly for the foreseeable future.

"If you want to do some work around the house, get in the car and buy paint now," AkzoNobel CEO Thierry Vanlancker told Bloomberg News earlier this week.

In its latest investor update, the Netherlands-based global paint manufacturer said pricing is set to increase significantly in the second half of 2021.

How long the disruptions last is a matter of debate among policymakers and economists.

The debate over 'transitory' inflation

The Federal Reserve insists that the current spate of higher inflation is only temporary – "transitory" is the central bank's preferred term – and already is showing signs of abating. White House officials privately say that they're sensitive to rising prices but see the supply chain issues subsiding while even observing some key prices, such as hardware, lumber and building materials, falling from their peaks.

However, there are some dissenters at the Fed.

Dallas Fed President Robert Kaplan said Thursday that imbalances in supply and demand are "going to last longer than some people are expecting," while companies struggling to fill job openings have to pay higher wages. Kaplan said he sees the "broadening of price pressures into next year."

"There's risk to the upside based on what we're seeing right now," he said.

Wall Street economists generally side with the transitory position, though many are now of the opinion that the current situation could indeed persist into 2022.

Morgan Stanley, for instance, expects inflation to continue higher through the first half of next year then veer into deflation for the second half. The present conditions in the paint industry represent "the peak of raw material availability issues/cost inflation, but just the early stages of price achievement against it," Vincent Andrews, an equity analyst at the firm, said in a note to clients this week.

Andrews notes that a number of factors, such as the fallout from Hurricane Ida and the functioning of global supply chains for the chemical industry, will help determine how persistent inflation is for paint. Shortage in epoxies, acrylics and certain solvents and additives are the main problems now, he said.

"Companies seem to be most confidence in the current solid demand environment persisting through 2022, but are watching production levels like the rest of us as it relates to the raw material environment," he said.

At his paint shop in Emmaus, Moser said customers are coping with higher prices at his store the same way they are handling inflation seemingly everywhere else.

"It's all over the place, in every aspect, the grocery stores, everywhere you see it," he said. "Everybody's dealing with the same problems now."