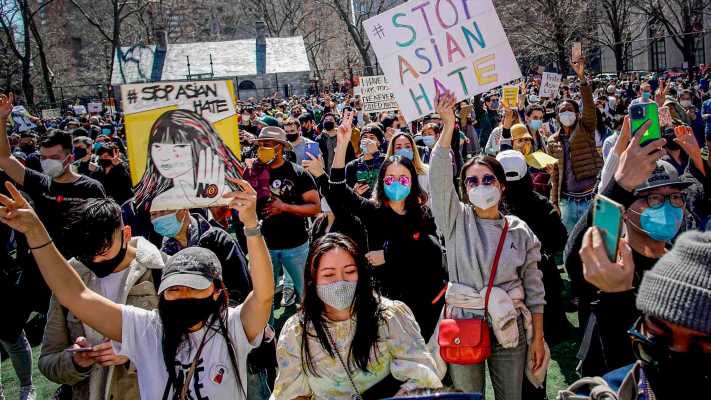 A 61-year-old Asian man who was the victim of what was called an “outrageous’’ assault was in critical but stable condition Sunday in a New York hospital.

Police said the man was collecting cans in East Harlem when he was attacked from behind, knocked to the ground and repeatedly kicked in the head Friday night. Surveillance video released by police appears to show the attacker stomping on the man’s head.

It was the latest instance in a troubling spike in attacks against Asian people across the country, believed to stem mainly from misguided anger about the coronavirus pandemic, which originated in China.

In late March, a 65-year-old Asian American woman was hospitalized with serious injuries after a man punched, kicked and stomped on her while uttering anti-Asian insults in a Manhattan street. Similar incidents have been documented in other cities, especially those with large Asian populations such as San Francisco and Oakland, California.

In March, the organization Stop AAPI Hate – founded last year in response to the increasing targeting of Asian Americans and Pacific Islanders during the pandemic – said it had received reports of nearly 3,800 hate incidents in a year, and estimated that was only a fraction of the actual number.

Former President Donald Trump frequently referred to the coronavirus as the “Chinese virus’’ or the “kung flu,’’ drawing widespread criticism for the terms’ racial connotations.

Demonstrators rally against hate and violence against Asians on March 21 in Columbus Park in the Chinatown section of Manhattan, N.Y. (Photo: Eduardo Munoz Alvarez/AP)

New York Mayor Bill de Blasio said the latest attack was “outrageous’’ and vowed to take action against the assailant, who remains at large.

“Make no mistake, we will find the perpetrator and they will be prosecuted to the fullest extent of the law,” de Blasio tweeted.

“I’m sickened to learn of yet another bigoted act of violence against an Asian American man,” the governor said in a statement. “This is not who we are as New Yorkers, and we will not let these cowardly acts of hate against members of our New York family intimidate us.”

Police did not release the victim’s name, but multiple news outlets identified him as Yao Pan Ma, a former restaurant worker who lost his job because of the pandemic and was trying to make money by collecting cans.