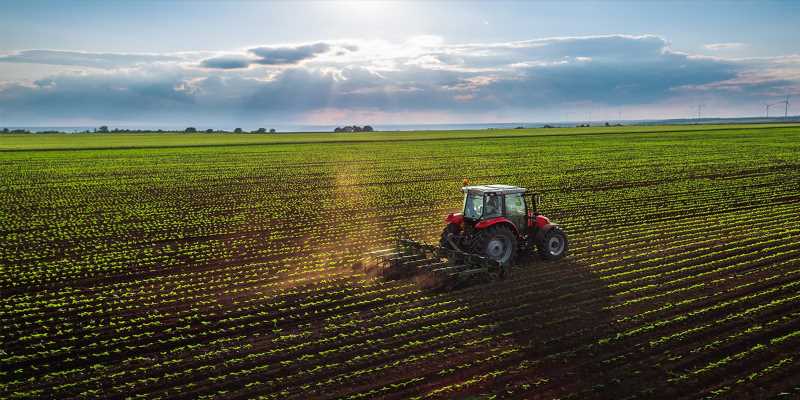 Once climate change deniers, the agriculture industry positions itself as part of the solution

Riding a wave of shifting public opinion about the reality of climate change, the U.S. agriculture industry is staking out a new position as part of the climate solution. (Photo: valio84sl / Getty Images)

Lobbying groups, such as the American Farm Bureau Federation, expressed skepticism that humans caused it. And companies, such as Tyson Foods and Smithfield Foods, have been fined millions for environmental violations.

But the industry in recent years has altered its stance on the issue. Riding a wave of shifting public opinion about the reality of climate change, it is staking out a new position as part of the climate solution.

Among the most visible signs of this about-face happened late last year when the Farm Bureau partnered with dozens of other groups, from agriculture organizations to environmental advocates, to announce a new initiative: the Food and Agriculture Climate Alliance. The group has proposed 40 new policies, including voluntary incentives and other tools for farmers to address a warming planet.

At the same time Syngenta, a major seed company, promised in its most recent sustainability assessment to invest in sustainable agriculture. Its CEO said in a January CNBC op-ed that climate change is “matter of survival.”

It was a dramatic shift from just four years ago when the company said in its business filings that “climate change may have both positive and negative impacts” on the company.

Asked about the change in tune, spokesman Saswato Das did not directly answer. Instead, he said there are “changing views of society regarding sustainable agriculture.”

“Climate change is an existential threat,” he added, “and we need to accelerate action before it is too late.”

Like Syngenta, the other groups and companies contacted for this story did not provide straightforward explanations for why they changed how they discussed climate change. Most said that farmers have always been at the forefront of environmental conservation.

“America’s farmers and ranchers are proactively identifying issues and being part of the solution,” said Andrew Walmsley, the farm bureau federation’s director of congressional relations.

But to critics of corporate agriculture, the new language sounds like “greenwashing” – a marketing tactic used by companies to improve their public images as opposed to truly changing unsustainable practices.

One proposal from Smithfield Foods that advocacy groups say fits this bill is incentivizing the use of digesters. The technology converts hog waste into biogas, which can be used for heat and electricity. The climate alliance also supports digesters.

Tyler Lobdell, a staff attorney at Food and Water Watch, said digesters aren’t all they’re cracked up to be because industrialized farms, where animals are confined in large numbers, produce too much manure to be sustainable.

“At best, digesters reduce a small amount of methane emissions,” he said. “It really is quintessential greenwashing.”

About 40-45% of Smithfield’s carbon footprint comes from manure management on farms, according to the company, which is the world’s largest pork producer. In 2017, Smithfield launched a renewables division to cut carbon and advance renewable energy.

He pointed to the recommendations from the Environmental Protection Agency and the Department of Agriculture about using digesters. According to the government, benefits of digesters include a diversified farm income, conservation of agricultural land and sustainable food production.

“To try to paint these efforts as not progressive and unbeneficial to water quality, air emissions and greenhouse gas reduction is to turn your back on years of research and data that proves otherwise,” Westerbeek said.

To be sure, the industry, particularly lobbying groups, still resists specific policies.

For example, in 2019, the National Cattlemen’s Beef Association lobbied against the work of a Maryland committee focused on sustainable food, and the committee was disbanded, according to Inside Climate News. Tyson, Cargill and National Beef are members of the cattlemen’s association.

Both the beef association and the pork council are part of the new climate alliance.

Climate change could have dire consequences for agriculture. According to the EPA, as temperatures rise, both the productivity and nutritional value of crops may decrease. Other government studies show that there may be less milk available to consumers, because dairy cows are sensitive to heat stress.

EPA data shows that agriculture made up around 10% of America’s greenhouse gas emissions in 2018, the latest year available. Even though government data shows the country’s overall emissions have been decreasing since 2007, emissions from the agriculture sector increased 3.7% since 1990.

It remains to be seen how the industry’s shift will affect that trend.

“It’s been gratifying to see the increasing attention given by a number of major food and agriculture companies to issues of soil carbon and regenerative agriculture,” said Robert Myers, the director of the Center for Regenerative Agriculture at the University of Missouri. “So now, are they doing it just for marketing or not?”

The Farm Bureau Federation, a founding member of the new climate alliance, has a history of opposing major changes to farming practices to address climate change.

“Climate change policy is controversial,” said then-president of the farm bureau, Dean Kleckner, in a prepared statement at a 1998 congressional hearing. “Drastic action proposed by the administration is not justified at this time.”

Over the years, the federation has said it would support alternative energy that reduces pollution. But, as recently as 2018, it said it would oppose legislation that would have set limits on emissions or required the reporting of emissions, according to its own background sheet on its lobbying on climate.

The climate alliance’s proposals largely consist of incentives for farmers to develop climate-friendly habits. Examples include tax credits for capturing the carbon produced in fields and a one-time payment for early adopters of sustainable practices.

Such proposals are not without flaws, said Silvia Secchi, associate professor in the Department of Geographical and Sustainability Sciences at the University of Iowa.

Also, the farmer has to do these every year in order to get the carbon sequestration benefits, she said. Otherwise, the carbon can get released back into the atmosphere.

“The things the farm bureau and other Ag lobbyists would like farmers to do are not really very effective things,” she said. “By doing it themselves versus being regulated by the federal government, they can do less, they can do what is easy for them and they can sell that effort.”

“That point of view ignores the incredible advances already made by agriculture voluntarily,” he said.

Over the last two generations, the U.S. has seen an exponential increase in crop production “while our inputs have remained relatively flat,” he said.

Other groups involved in the alliance have a similar history.

In 2010, according to ProPublica, the Cattlemen’s Beef Association spent much of its lobbying effort on “working to prevent consideration of any climate change legislation in the Senate.”

The association recently announced that it will work with the Biden Administration to “demonstrate cattle production is a solution to climate concerns.”

FILE – In this Jan. 20, 2021, file photo, President Joe Biden signs his first executive order in the Oval Office of the White House in Washington. Biden laid out an ambitious agenda for his first 100 days in office, promising swift action on everything from climate change to immigration reform to the coronavirus pandemic. (AP Photo/Evan Vucci, File) ORG XMIT: WX209 (Photo: Evan Vucci, AP)

The National Pork Producers Council, which has fought transparency of emissions, said its members have produced more meat while using less land, water and energy.

“Our industry is committed to further reducing this contribution,” Rachel Gantz, the council’s spokeswoman, said.

Some of the companies whose lobbying organizations are involved in the climate alliance have been fined millions for environmental violations.

But they have also made public commitments about reducing their environmental footprints.

For example, Tyson Foods – which belongs to the cattlemen’s beef association and the North American Meat Institute, both members of the alliance – has been fined about $57 million for environmental violations since 2000, according to data from Good Jobs First.

In 2017, the company pleaded guilty to a wastewater leak from a facility in Missouri that resulted in the death of more than 100,000 fish. It paid a $2 million fine.

More recently, however, Tyson said it will reduce its greenhouse gas emissions by 30% by 2030.

“We acknowledge our previous violations and we aim to continuously improve on our outcomes for environmental compliance,” a Tyson spokeswoman said in an email. “We have nearly 500 full-time team members who are solely dedicated to excellent environmental performance and compliance.”

This story is a collaboration between USA TODAY and the Midwest Center for Investigative Reporting. The center is an independent, nonprofit newsroom covering agribusiness, Big Ag and related issues. USA TODAY is funding a fellowship at the center for expanded coverage of agribusiness and its impact on communities.