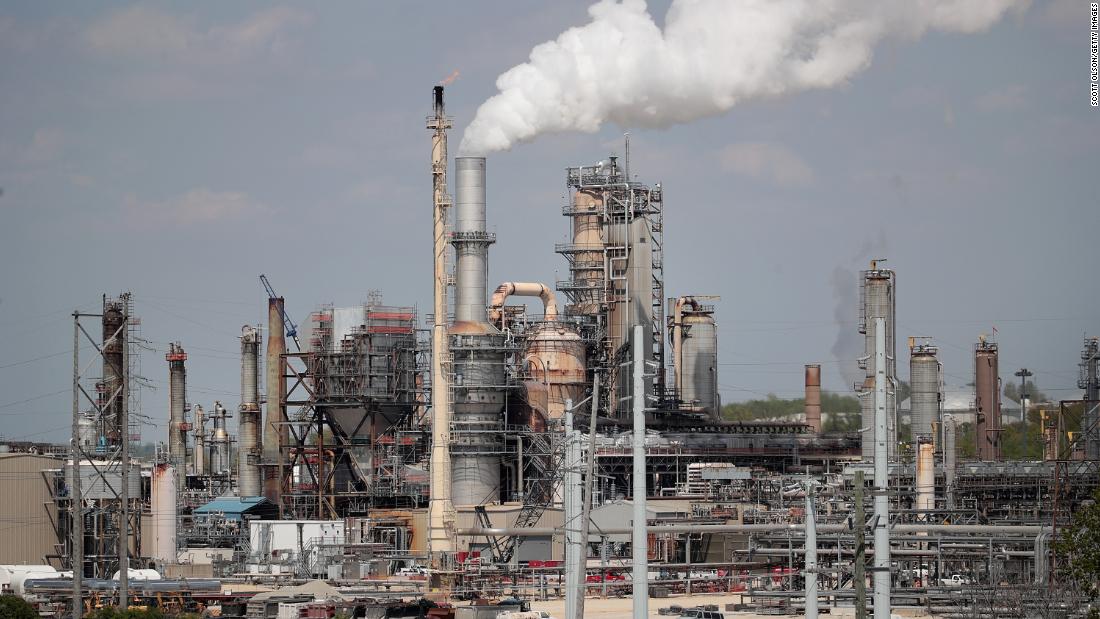 New York (CNN Business)Oil and gas companies know the clock is ticking to become greener as investor demand for climate action mounts. However, some are in a better spot to curb their emissions than others.

Shell, Repsol and Total are the leading oil companies trying to reduce greenhouse gas intensity, according to a new report by Morningstar. The report, released January 13, examined integrated oil companies, which are involved in every aspect of petroleum production.
Oil companies need to go green to remain competitive, according to the research firm. Regulation could help, but so far has failed to put significant pressure on the industry. For example, existing carbon taxes cover very little global oil production or consumption, Morningstar noted.

“The bigger risk is likely to be investors voting with their feet well before there is global governmental consensus on regulation, which is probably what integrated oil management teams believe is the more immediate threat,” according to the report.

More than 50% of oil and gas companies take climate change into account when making business decisions or have strategies to reduce emissions, according to the Transition Pathway Initiative, a group that assesses how prepared corporations are to transition to a low-carbon economy.

Last week, the International Energy Agency released a report urging the sector to do more, saying that “failure to address growing calls to reduce greenhouse gas emissions could threaten their long-term social acceptability and profitability.”

Oil and gas companies emit greenhouse gases through direct operations such as burning fuel at refineries and also from indirect activities like buying electricity from others to run their facilities.
Another source is the combustion of products they sell to consumers, such as the gas you pump into your car. This category, known as scope 3, represents about 90% of integrated oil companies’ emissions, according to Morningstar. That’s an issue because companies can’t do much to control those gases short of changing the products they sell.
Shell (RDSB), Total (TOT) and Repsol (REPYY) stood out because they are the only integrated oil firms that have included scope 3 emissions in their reduction targets, Morningstar wrote.
The three companies, along with Norway’s Equinor (EQNR), are industry leaders in the transition to the renewable energy generation, the report said. Morningstar found those investments were the most effective way to reduce emissions, followed by producing more natural gas, which according to the U.S. Energy Information Administration releases less carbon dioxide when burned than other fossil fuels.
“The remainder of companies are focused solely on their own operations, which is positive, but any reduction will have little effect on global emissions,” according to the report. Morningstar also looked at Chevron (CVX), BP (BP) and Petrobras (PBR), among other firms.
A Chevron spokesperson said the company is addressing climate change by lowering its carbon intensity, increasing the use of renewable energies and investing in new technologies. It also supports a carbon tax.
“We don’t control demand for the products we produce, but we must be accountable for how we are efficiently and effectively providing the energy the world needs,” the spokesperson said.
A Petrobras spokesperson directed CNN Business to the group’s most recent strategic plan, which includes zero growth on emissions from their operations by 2025. BP didn’t reply to requests for comment in time for publication.
Still, cutting emissions from extraction and production should benefit oil and gas outfits, in part because it would be difficult to pass along those costs if carbon taxes take hold, according to Morningstar.
While Shell, Total and Repsol are on a positive trajectory, the research firm said their emission reduction targets fall short of the International Energy Agency’s 2-degree scenario, an initiative to cap the rise of the world’s temperature at 2ºC.

Oil and gas companies continue to face pressure to address climate change.
In its report, which was presented at the World Economic Forum in Davos, the International Energy Agency said the industry had channeled less than 1% of its annual capital spending toward low-carbon projects.

Although some oil and gas companies have taken measures to reduce emissions, the industry “could play a much more significant role through its engineering capabilities, financial resources and project-management expertise,” according to the agency.
“There are few signs of the large-scale change in capital allocation needed to put the world on a more sustainable path,” the agency said.
Source: Read Full Article