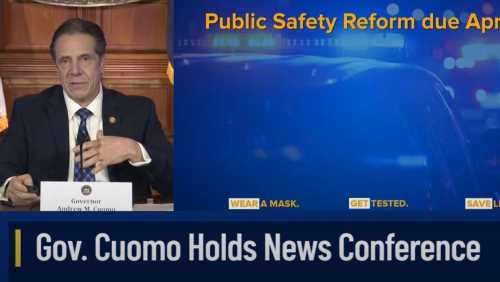 NY Gov. Cuomo Admits Mistakes On Nursing Home Data Delay, Says “Everybody Did The Best They Could”

Cuomo was responding to a cascade of reports over the past few days that his administration had withheld information about the scope of devastation wrought by Covid-19 in the state’s nursing homes. On Friday, The New York Times reported that a top Cuomo aide revealed in a private conference call with Democratic donors that NY withheld data because it feared an investigation by then-President Trump’s Justice Department.

Early in the pandemic, Cuomo was lauded for his seeming straightforward presentation of the facts of the pandemic in the state. The one big blemish on his record was the massive number of deaths in nursing homes early in the pandemic. The totality of those numbers was among the data allegedly withheld.

On Monday, the NY governor did not deny the information was not disseminated saying, “There was a delay.” But he sought to portray the lack of communication as a simple mistake, not an intentional deception.

“In retrospect, should we have given more priority to fulfilling information requests?” he asked. “In my opinion, yes.”

Cuomo said the lack of information then led to speculation.

“The void we created by not providing information was filled with fear and cynicism,” he contended. “Nature abhors a vacuum. Politics does too. If you don’t provide information, something else will.”

He continued, “I take responsibility for creating the void.”

The governor maintained that, throughout the pandemic, his administration sought to do the best it could with an evolving situation.

“These decisions are not political decisions. They are made on the best information medical experts have at the time.”