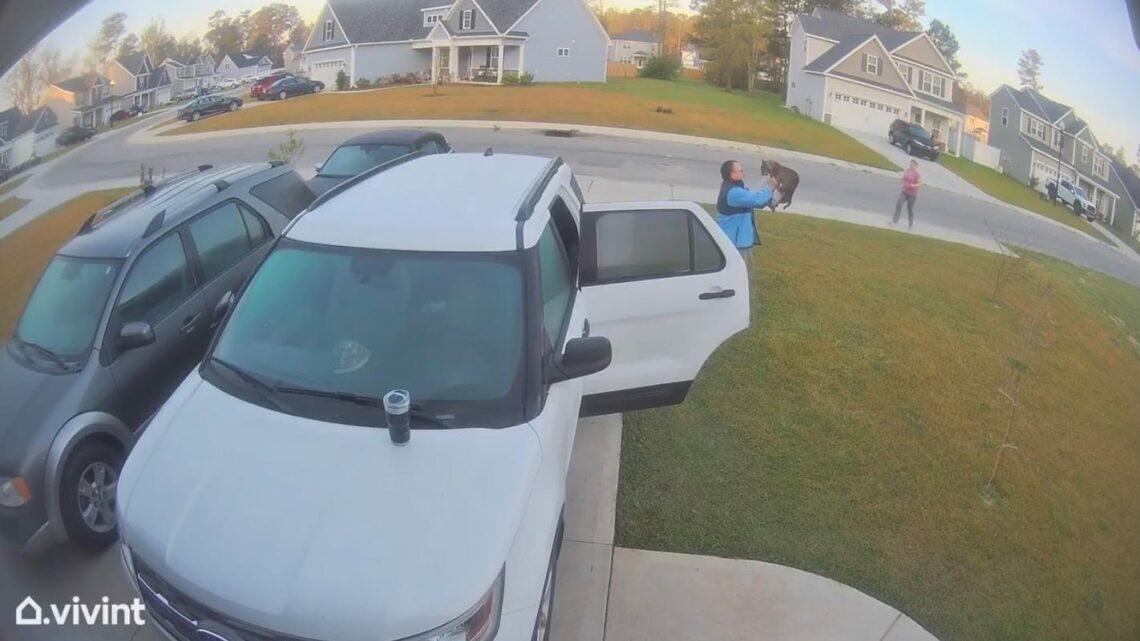 With a pet carrier in hand, Kristi Wade walked outside her home in Burgaw, North Carolina, about to take her 15-year-old cat to the vet when she let out a scream. Her husband, Happy, sprang into action as something attacked her.

“To be quite honest with you, I didn’t know what I had grabbed a hold of,” he told USA TODAY. But for Kristi, she knew quickly what had pounced on her.

“I knew immediately what it was. I knew it was a bobcat.”

As the bobcat attacked Kristi, Happy grabbed the animal, wrestled it and threw it across his yard. Footage of the attack from the Wades’ security camera has been seen all over social media.

It’s been over two weeks since the bobcat attack happened, but the couple can’t go to church without being told they were seen on TV.

“They’ve called us jokingly, ‘They’re celebrities,’ but we don’t feel like celebrities,” Kristi Wade said. “We wish the video had never been shared, but it was, so now we’re dealing with it.”

“It bit me on my hand, and the only reason I knew I got bit then was because I literally felt a tooth on my bone,” he said.

Given the time he likes to spend in the woods, Happy knew there was something wrong with the bobcat since it’s common for them to run away, and the animal looked underweight.

The Pender County Sheriff Department confirmed a bobcat was killed in Burgaw the same day the Wade’s were attacked. Testing was done on the animal at the North Carolina State Laboratory of Public Health, where it was confirmed the animal had rabies.

The couple found out about the rabies 24 hours later, the first case in the area in over a year. They had survived the attack, but now came the part of dealing with a virus where the Centers for Disease Control and Prevention says deaths, “are rare but typically occur in people who do not seek prompt medical care.”

Luckily, the couple was at a local hospital less than an hour later and immediately put on antibiotics. Any mark the bobcat made on the Wades needed to be surrounded with antibodies, which Kristi said meant many shots.

“They picked arms and thighs and anywhere they could get it in you. It was not fun, but it was necessary,” she said.

The couple had to get single shots in the arm five times after the initial shots, which totaled 35 shots in 14 days.

“I said to the nurse it was almost as bad as being attacked by the cat,” Kristi said.

Happy and Kristi Wade, the couple who was attacked by a bobcat outside their home in Burgaw, North Carolina. (Photo: Courtesy: Kristi Wade)

As the couple tries to move on from the incident, Kristi admitted it’ll take a while. She mentioned her husband has received backlash for drawing his gun and shooting at the bobcat, but both said they love animals as they are part of the local Pender County Humane Society.

Happy said it was obvious the bobcat was sick and in pain, a symptom of rabies.

“Unfortunately we did have to put the cat down, but that cat was suffering, and it was the right thing to do,” he said.

Happy added if there is any good that can come from this situation is to encourage people to vaccinate their pets from rabies. The CDC says among domesticated pets, around 70 dogs and 250 cats acquire rabies each year.

Along with the backlash have been positive comments praising Happy for defending his wife, especially since the animal was close to biting her neck. He said he doesn’t believe he’s a hero, but he is one to his wife.

“Someone asked me if I was surprised that Happy did that, and I said absolutely not. As long as I’ve known him, I always knew that if I was in a situation where I needed protecting, I knew that he would put me first,” she said.

But Happy has known his wife since they were teenagers, and as they approach their 30th wedding anniversary in August, he just feels like a husband that loves his wife.

“I’m pretty lucky that I married somebody that I feel that way about. Not everybody can say that,” he said. “I just think I’m a loving husband, who was lucky enough to marry the right girl.”