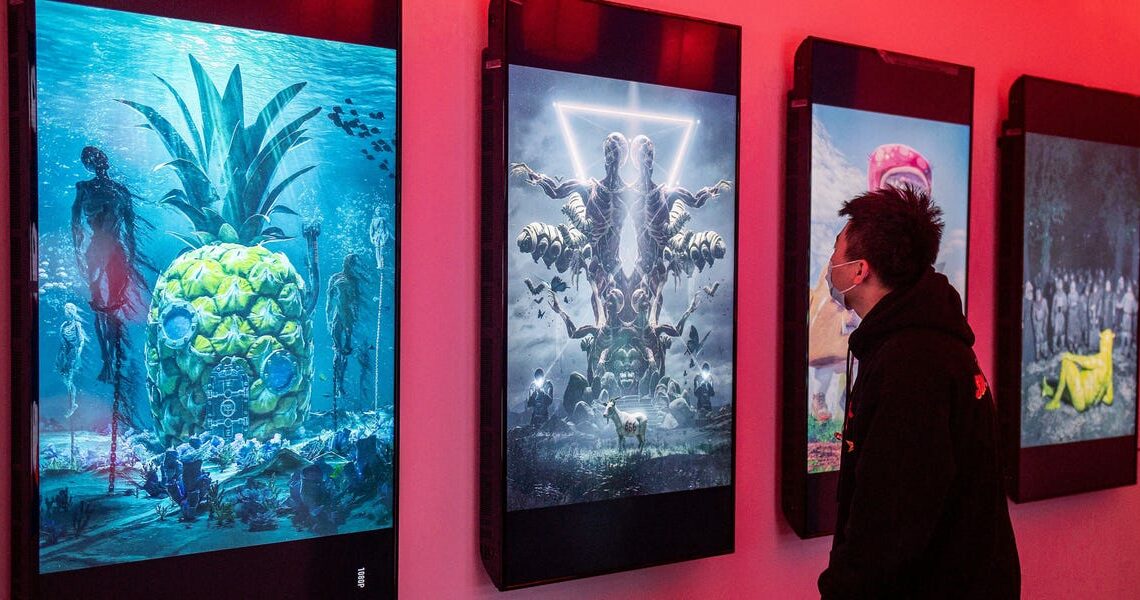 NFTs give artists the chance to reverse their extinction

The NFT craze continues, and it could change the art world.

The acronym, which stands for “non-fungible token,” is a digital file that’s tradable by blockchain. It shot to fame and prominence in March when a visual artist called Beeple sold “Everydays: the First 5000 Days,” a digital collage of images, for $69.3 million at auction. It was the third-highest price ever paid at any auction for a work by a living artist, according to The Washington Post. Not even a Titian or a Raphael has sold for that much.

Now, more artists are trying to get in on the action, reported The Wall Street Journal’s Kelly Crow. Everyone from well-known artists like Damien Hirst to lesser-known artists like Michah Dowbak are looking to sell NFT art. Most recently, Crow wrote, artist Urs Fischer, known for selling sculptures for as much as $6.8 million, has been planning to sell his first NFT, “Chaos #1 Human” with a starting bid of $1,000.

Meanwhile, museum trustees are adding cryptocurrency to their portfolios, art dealers are trying to uncover hot NFT artists, galleries are finding they might need to be become “NFT savvy,” and auction houses are holding NFT classes, Crow wrote.

Even media brands are jumping on the bandwagon. Playboy is launching an NFT art gallery and auction hub via Nifty Gateway to showcase its art archive and to release original works, Rachel Webber, Playboy’s chief brand officer and president of corporate strategy, told Insider’s Kari McMahon.

So, too are comic-book artists. DC Comics has forbidden its freelance artists from selling NFTs featuring DC’s intellectual property because the company itself is “exploring opportunities” to enter the NFT market, DC Comics’ senior VP of legal affairs, Jay Kogan, wrote in a letter.

The move comes after some artists started using NFTs to cash in on their depictions of iconic DC characters, including Wonder Woman artist José Delgo selling a Wonder Woman-themed NFT collection. This could be the latest skirmish over IP in a decades-long war within the comics industry about who owns the art: the publisher or the artist.

If crypto art becomes something of permanence rather than fad, artists could see a rebirth.

In his 2020 book, “The Death of the Artist,” William Deresiewicz traces the evolution of the artist since the Renaissance. He argues that capitalism has created a new paradigm in which artists have become more “creative entrepreneur” than artist, as they work to make a living in a digital age that has enabled anyone to create and share work online.

Such digital innovation has made art ubiquitous, Deresiewicz argues, which is demonetizing content. As a result, the book posits, most revenues have gone to the top 1% in their fields and the artistic middle class has essentially been wiped out.

But maybe the NFT could be a silver bullet, providing sorely needed new income stream for middle-class artists, far below the level of a Beeple.

For example, crypto art could expand the $11 billion US music industry market by becoming an independent revenue source for musicians. “NFTs could save the music industry,” music industry expert Cherie Hu told Insider’s Grace Kay. “We’re just a year out from many artists losing their No. 1 source of income. Artists can’t make enough on streaming alone. They need to find a better way to make money.”

And there is a lot of money in NFTs. The NFT market has grown into a $250 million market with buyers vastly exceeding sellers, according to a 2020 report from L’Atelier BNP Paribas and nonfungible.com. More than $1 billion was spent on digital assets in March alone this year, according to data from CryptoSlam.

Whether the market lasts is an open question. NFT sales declined by 20% over the past 10 days, indicating a volatile market, Crow reported, citing industry tracker Nonfungible.com.

The American public seems convinced it’s here to stay, as Insider’s Isabelle Lee reported that a majority surveyed in late March thinks they are “the next big thing.” The artistic middle class likely hopes so.