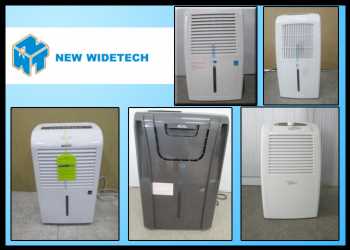 The recall was initiated after New Widetech received reports of 107 incidents of the recalled dehumidifiers overheating and/or catching fire, resulting in about $17 million in property damage.

The recall involves about 2 million dehumidifiers sold in the United States. In addition, about 380,000 were sold in Canada, and about 25,000 in Mexico.

The brand name, model number, and pint capacity are printed on the nameplate sticker on the back of the dehumidifier.

The products, manufactured in China by New Widetech, were sold at Lowe’s stores, Costco, Walmart, Menards, and other retailers nationwide from February 2009 through August 2017 for between $120 and $430.

According to the agency, the recalled dehumidifiers can overheat and catch fire, posing fire and burn hazards. However, no injuries have been reported to date related to the recalled products.

Consumers are urged to stop using the dehumidifiers immediately and contact New Widetech for a refund. The amount of the refund will be pro-rated based on the age of the dehumidifier.