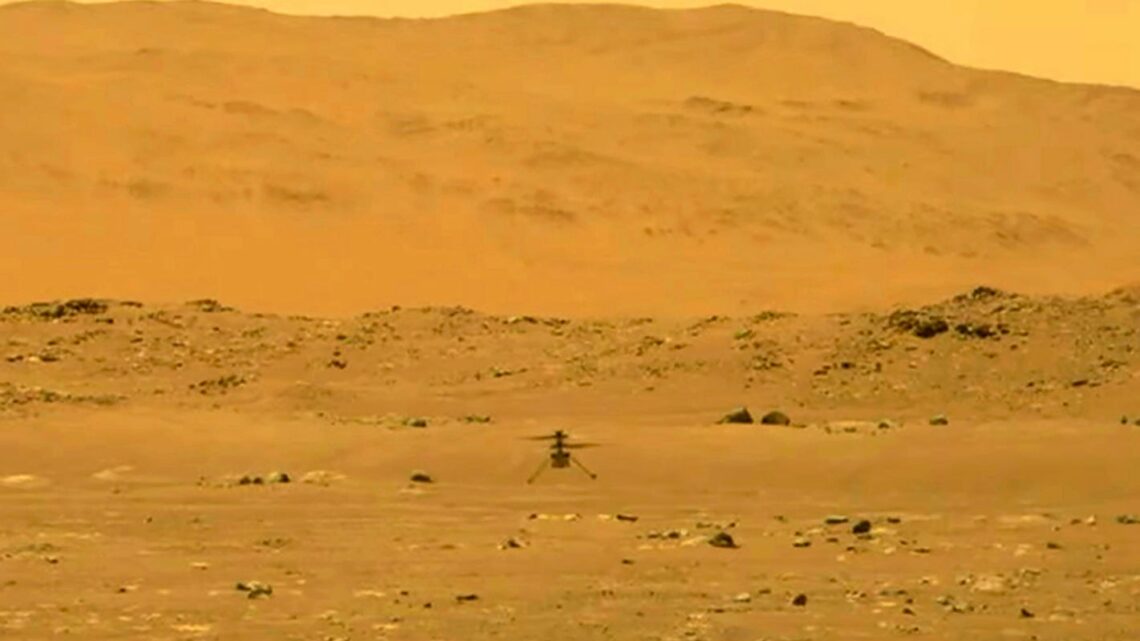 The Perseverance rover photographed the Mars helicopter Ingenuity as it landed on the Martian surface after its historic first flight on April 19. (Photo: NASA/AP)

BREVARD COUNTY, Fla. – Ingenuity is the little Martian helicopter that could and did.

On Monday, NASA’s Ingenuity Mars Helicopter became the first aircraft in history to make a powered, controlled flight on another planet.

“This really is a Wright brothers moment. It’s the start of a whole new kind of planetary exploration,” acting NASA Administrator Steve Jurczyk said during a press conference.

“We don’t know exactly where Ingenuity will lead us, but today’s results indicate the sky – at least on Mars – may not be the limit.”

Because Mars has only 1% the atmosphere of Earth, flying there is very difficult.

“A rotocraft pushes atmosphere to generate lift. When there is that little atmosphere, the roto system has to spin really fast. In fact it spins at over 2,500 revolutions per minute for the flight,” Ingenuity’s Project Manager Mimi Aung explained.

After an issue with its flight software delayed the historic mission last week, Ingenuity successfully spun up its high-speed blades and lifted about 10 feet off the ground, hovered for 30 seconds and landed.

“Ingenuity is the latest in a long and storied tradition of NASA projects achieving a space exploration goal once thought impossible,” said Jurczyk.

‘I don’t think I can ever stop watching it’

Engineers from NASA’s Jet Propulsion Laboratory responded with cheers and applause at the arrival of the first photo, a black-and-white image of Ingenuity’s shadow as it hovered above the Martian surface. A series of color images taken by the rover showed the helicopter landing.

Aung and her team have been working over six years to achieve this goal.

“This morning, our dream came true,” she said.

The historic moment was captured on several cameras including a video camera on the Perseverance rover, which was standing by. Aung said watching the incredible footage of the flight gave her goosebumps.

“It looks just like the way we tested in our space simulator test chamber here. Absolutely beautiful flight. I don’t think I can ever stop watching it.”

“I don’t think I can ever stop watching it…” #MarsHelicopter project manager MiMi Aung talks about how Ingenuity flew just the way they had expected it to fly. See the hi-res video. pic.twitter.com/cBoCzSlpZB

But the flight didn’t happen without some stress on the part of the engineers. On top of the flight software delay that pushed the experiment to Monday, they had to wait more than three hours to see if flight was successful.

“We operate on what’s called ‘Earth receive time,’” says Robert Braun, JPL director for planetary science. “What we’re watching on the livestream is the signal that’s coming back in real time from Mars. In reality, the helicopter will have flown autonomously several hours earlier.”

NASA’s Ingenuity Mars Helicopter took this shot while hovering over the Martian surface on April 19, 2021, during the first instance of powered, controlled flight on another planet. (Photo: NASA / JPL-Caltech)

NASA Associate Administrator for Science Thomas Zurbuchen announced the name for the Martian airfield where the flight took place, an ode to the pair of brothers who launched the first successful flight here on Earth.

“Now, 117 years after the Wright brothers succeeded in making the first flight on our planet, NASA’s Ingenuity helicopter has succeeded in performing this amazing feat on another world,” Zurbuchen said. “While these two iconic moments in aviation history may be separated by time and 173 million miles of space, they now will forever be linked.

“As an homage to the two innovative bicycle makers from Dayton, this first of many airfields on other worlds will now be known as Wright Brothers Field, in recognition of the ingenuity and innovation that continue to propel exploration,” he said.

Ingenuity arrived on the red planet Feb. 18 attached to the underside of the Martian rover Perseverance. Ingenuity’s flight is considered a technology demonstration and is not critical to the science Perseverance is doing, namely searching for ancient microbial life on Mars.

Over the next few days, the helicopter team will receive and analyze all data and imagery from the test and formulate a plan for the second experimental test flight, scheduled for no earlier than Thursday.

Derek Chauvin’s trial: Closing arguments are set. What happens next? Breaking down jury deliberations and timing of the verdict

Vaccine check-in: America reaches milestone with COVID-19 vaccine now widely available to those who want it, but hesitancy still casts a shadow