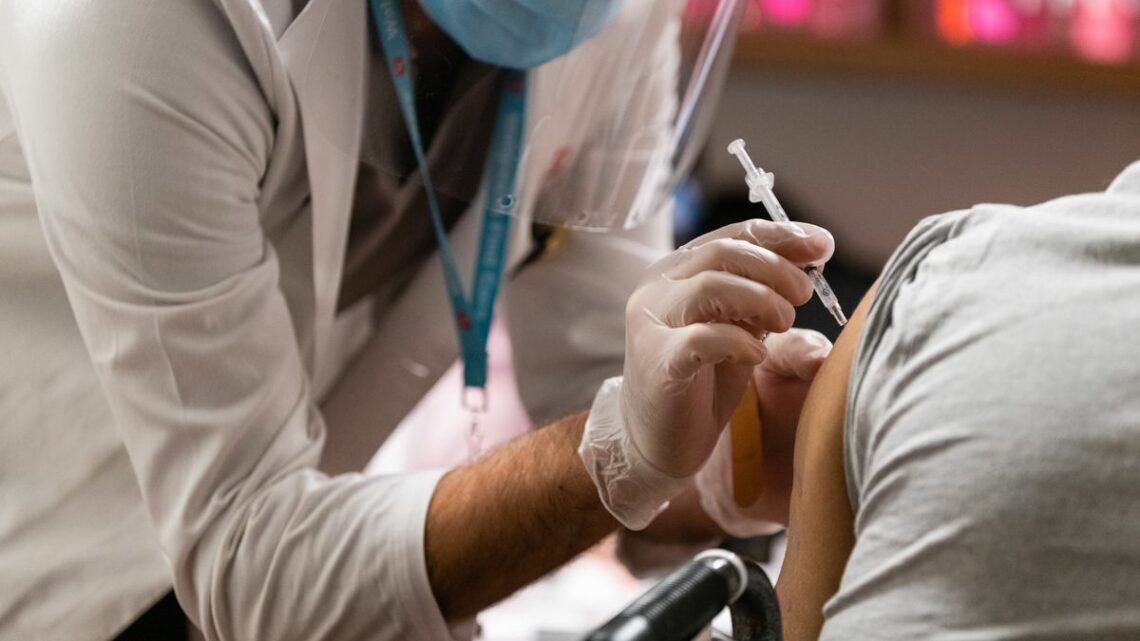 Just 1 in 100,000 people have had a severe allergic reaction to the first Covid-19 vaccine, the U.S. Centers for Disease Control and Prevention said. Moderna Inc.’s vaccine won European Union approval.

German Chancellor Angela Merkel’s government pleaded for patience whilepushing back against criticism of the vaccine rollout, as the country’s daily death toll exceeded 1,000. Britain, which reported the most deaths since April, is also racing to get shots to the most vulnerable after more than 1 million people were infected in England.

Subscribe to adaily update on the virus fromBloomberg’s Prognosis teamhere. Click CVID on the terminal for global data on coronavirus cases and deaths.

In the latest disagreement with New York City Mayor Bill de Blasio, Governor Andrew Cuomo said police officers and firefighters are not yet eligible to get the Covid-19 vaccine.

“We need to get the health-care population done first, because they are the front line,” Cuomo said. “They have the greatest exposure, and we want to make sure they don’t get sick, because they would also be the super-spreaders and because we would then have diminished hospital capacity, which would mean we would have to close sooner.”

The city will continue to seek approval to vaccinate “more high-risk workers who are out there saving the lives of New Yorkers,” said de Blasio press secretary Bill Neidhardt. “It’s simple. We have the doses, let’s put it in their arms and help them save lives.”

California reported 459 daily virus deaths, the second-highest tally since the pandemic began, as the most-populous state continues to battle a surge of cases that has strained health-care facilities.

Virus hospitalizations climbed 1.5% from the prior day to a record 22,820 patients, according to state health-department data Wednesday. Intensive-care units in Southern California and the San Joaquin Valley are at a surge capacity, while the San Francisco Bay area has less than 8% of its ICU beds available.

California has shown some signs of its outbreak easing, which may reflect a holiday lull, the effects of a lockdown and delays in reporting. The state reported 29,892 new cases Wednesday, below the 14-day average of about 37,000. Still, Governor Gavin Newsom warned this week that officials are girding for a “surge on top of a surge” following holiday gatherings.

Top U.S. health officialsencouraged states to start vaccinating people more widely, acknowledging that the immunization rollout has been slower than anticipated and opening the spigot for a broader range of Americans to begin getting shots.

Health and Human Services Secretary Alex Azar during a call with reporters Wednesday blamed the introduction of Covid-19 shots around the holidays and overly detailed state plans for hindering the vaccination campaign. He urged governors to vaccinate more seniors and other high-risk populations to prevent shots from sitting in freezers.

About 5.2 million doses of Covid-19 vaccines from Pfizer Inc.-BioNTech SE and Moderna Inc. have been administered in the U.S. since mid-December, according to data compiled by Bloomberg News. That represents a fraction of the number of doses distributed so far.

Colorado has begun administering vaccines to residents ages 70 and older following last week’s decision to expedite shots to seniors, who account for 78% of the state’s Covid-19 deaths, Colorado Governor Jared Polis said during an online briefing.

Health officials also reported that the total number of confirmed cases of the mutation first detected in England stands at two. Colorado was the first state to report the faster-spreading mutation last week. Colorado has recorded 3,986 Covid-19 deaths since the pandemic swept into the U.S., Polis said.

Roughly 1 in 100,000 people have had a severe allergic reaction to the first Covid-19 vaccine, a rate that’s higher than the flu vaccine but still quite rare, U.S. health officials said.

Astudy by the Centers for Disease Control and Prevention released Wednesday outlined 21 cases of anaphylaxis among the first 1.9 million recipients of Pfizer Inc.’s vaccine, a rate of 11.1 per million doses administered. No anaphylaxis deaths have been reported, the CDC said.

Moncef Slaoui, chief scientific adviser to the U.S. Operation Warp Speed effort to develop Covid-19 vaccines, will stay on as a consultant to the incoming Biden administration, he said Wednesday.

“I have been asked to become a consultant after the time comes when the transition happens, which I have accepted,” Slaoui said on a call with reporters.

Slaoui, a longtime pharmaceutical executive, had previously said he would consider returning to the private sector after two vaccines and two therapies were available. Operation Warp Speed has achieved that goal with vaccines from Pfizer Inc. and Moderna Inc. authorized for emergency use, along with antibody therapies available to treat Covid-19 cases.

New York’s vaccination rate of medical workers has tripled so far this week, but supply is still an issue, Governor Andrew Cuomo said.

The state has administered more than 31,000 doses a day for the past two days, compared with a daily rate of 10,809 over the past three weeks, Cuomo said.

New York is getting about 300,000 doses a week from the federal government. To date it has received 950,000 doses for 2.1 million health-care and nursing home staff and residents, Cuomo said.

Ireland tightened restrictions in a bid to contain its worst virus outbreak yet, adding extra curbs to what’s already one of Western Europe’s strictest lockdowns.

The government will keep most students out of schools until at least the end of the month, Prime Minister Micheal Martin said in Dublin on Wednesday. Most construction will also halt, and click-and-collect services from non-essential stores will end. From Jan. 9, all passengers arriving at Irish airports and ports whose trip starts in Great Britain or South Africa will need evidence of a recent negative virus test result.

The U.K. reported 1,041 new coronavirus deaths within 28 days of a positive test on Wednesday, the highest daily increase since late April.

A further 62,322 positive coronavirus cases were also reported on the government’s dashboard, higher than a seven-day average of 55,945. More than 30,000 people are in hospitals with coronavirus as of Jan. 4, the government said.

The rising numbers come as the country is subject to a nationwide lockdown, in which schools have been closed, and non-essential shops shut.

Moderna Inc.’s Covid-19 vaccine wonEuropean Union approval, opening the way for a second weapon in the bloc’s battle against a resurgent virus.

The European Commission granted marketing authorization to the vaccine on Wednesday, hours after a sign-off by the EU’s medicines regulator.

EU leaders are facing growing pressure to speed up clearance and deployment of vaccines to tame a surge of cases across the continent. The 27-nation bloc began immunizations last week with the vaccine developed by Pfizer Inc. and BioNTech SE, but the pace of the rollout has been uneven, prompting unfavorable comparisons with the U.K. and U.S.

The U.K. government confirmed that GCSE and A-level exams will be canceled this year due to the pandemic, with pupils instead being graded using teacher assessments.

Education Secretary Gavin Williamson told members of Parliament Wednesday it is right to “put our trust in teachers rather than algorithms” for generating grades. Earlier, Prime Minister Boris Johnson promised that England’s schools will be the first things to reopen after the national lockdown but warned that restrictions could last months.

Chancellor Angela Merkel’s government pleaded for patience as it pushed back against criticism that Germany bungled the rollout of a vaccine. A shortage of doses at the start of the campaign was expected and stems from production bottlenecks, Health Minister Jens Spahn said Wednesday in Berlin.

Additional production capacity will lead to a “massive” gain in output, he said. Moderna’s vaccine could further ease supplies. Distribution of the shot could start as soon as next week, Spahn said.

Germany’s daily Covid-19 deaths exceeded 1,000 for only the second time since the start of the pandemic. There were 1,009 fatalities in the 24 hours through Wednesday morning, according to data from Johns Hopkins University, bringing the total to 36,757. The number of infections has doubled since the end of November.

— With assistance by Dan Reichl, and Stacie Sherman

Rioters leave trail of damage throughout US Capitol building

RICHARD KAY: The masterchef with an insatiable appetite for women
Technology