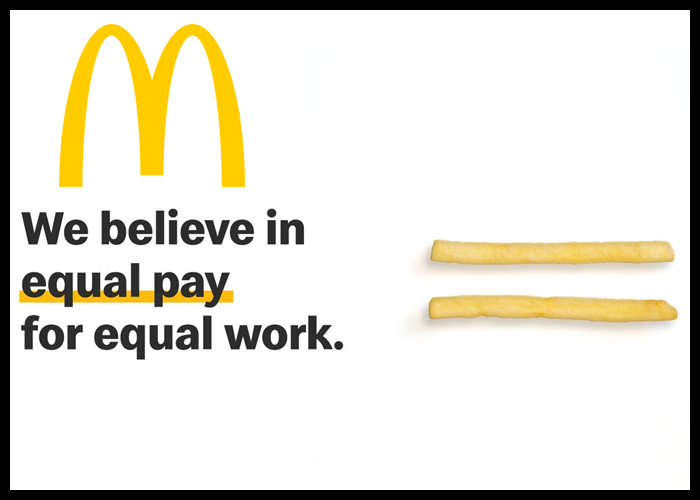 McDonald’s Says Equal Pay For Women Is Only A Beginning

McDonald’s says equal pay for women is just the beginning, while conforming that the fast-food giant pays women globally 99.85 cents on the dollar for similar work, taking into account legitimate pay drivers such as level, location, experience, and performance. The company added that it is on track to close that identified gap in 2022.

McDonald’s has had a significant impact on the communities it serves and has taken a more holistic approach to women and their careers, with 54 percent of McDonald’s global staff being women.

McDonald’s has also handled the much talked about gender pay gap. McDonald’s began tackling the issue of equal pay years ago, while external studies still show that women around the world are being paid 20 percent less than their male counterparts.

The world’s largest burger chain has been adjusting salaries and investing in equal pay within the business, with the pay for its global women staff currently next to equal at 99.85 percent of the male counterpart for similar work.

However, women are paid 99.16 percent of their men counterpart for comparable work among corporate staff in the U.S. They are looking to close the gap fully by the 2022 pay cycle.

Meanwhile, McDonald’s said in mid-May that it will be raising hourly wages for more than 36,500 hardworking employees at McDonald’s-owned restaurants by an average of 10 percent to make it among the industry-leading pay and benefits package.

In March 2019, the company had launched a program aimed at improving the representation of women at all levels of the company and to achieve gender equality in career advancement.

It also launched a strategy called “Better Together: Gender Balance & Diversity” that aimed to make improvements in gender representation by 2023. The company is also a signatory of the UN Women’s Empowerment Principles, an effort to push private sector employers to increase gender equality.

Meanwhile, rival Starbucks achieved gender and racial pay equity for partners of all genders and races performing similar work across its U.S. stores in 2018.

Trump rips 'criminal' Zuckerberg over $400M he donated to 2020 causes