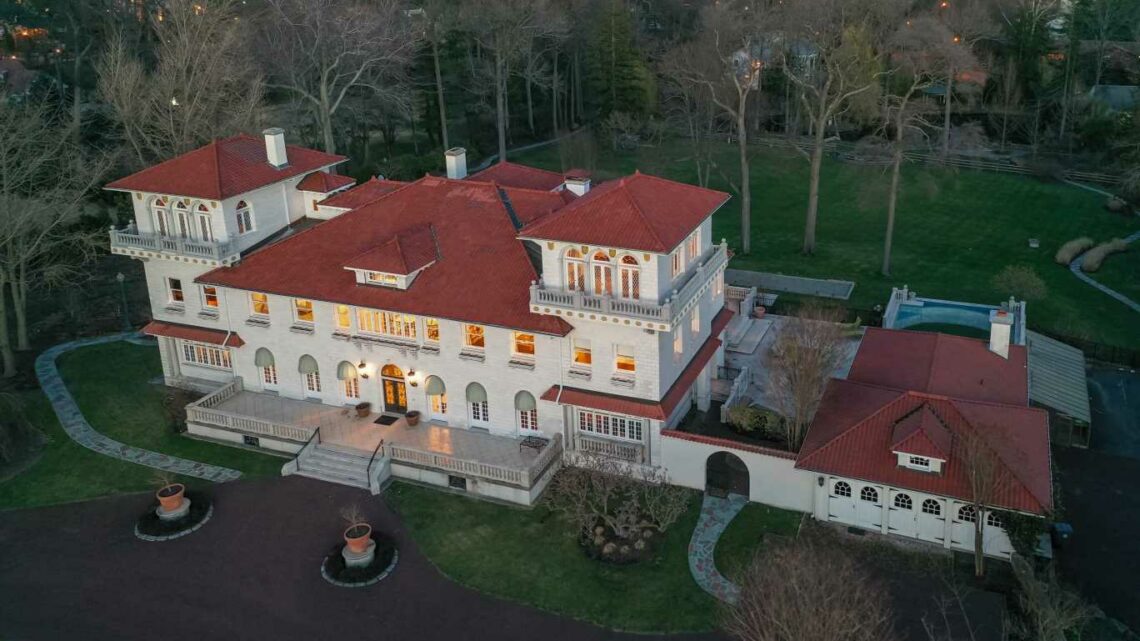 Mansion, once asking $39 million, sells for $4.6 million. Here's what happened

A mansion was once hailed as one of the most expensive homes for sale in New Jersey, has seen its price drop like a ton of bricks.

Back in 2013, the 28-room estate at 83 North Woodland St. in Englewood, New Jersey, known as the Gloria Crest Estate, hit the market with a $39 million price tag. The property's name harkens back to its original owners in the 1920s, but soon after it was built, the extravagant ivory-colored home was dubbed the White House of Englewood.

In the eight years following its debut at $39 million, public records show, the almost 100-year-old mansion located in Bergen County saw its jumbo price tag chopped down to size in a series of massive price reductions.

In 2014, after a year on the market, the price was reduced to $25 million. The price cuts continued over the next couple of years and by 2017 it was down to $17 million. Then in February of 2018, court records show the property was foreclosed upon when the owners defaulted on a $7.3 million mortgage by U.S. Bank.

It was briefly taken off the market until June 2018, when it was put up for sale again, this time for $12 million under a new listing agent. Then from 2019 to 2021, the listing was represented by yet another broker and the price got hacked six more times, falling from $9.99 million down to $5.99 million.

Over those same eight years, the property went through at least four listing agents. The most recent real estate broker to represent the home was Michelle Pais, the CEO of Signature Realty NJ. It was Pais' listing through the last six price cuts — before she finally got it sold.

"A home is worth a what a buyer is willing to pay for it," Pais told CNBC. "What a buyer wants and what an appraiser says is irrelevant, and that goes for any home."

Last month a buyer, who Pais isn't at liberty to name, was willing to pay $4.6 million for the mansion and the almost five acres it sits on. The closing price was a whopping 88% discount from its original asking price and wasn't even enough to cover the 2018 loan default.

According to floor plans, the home has about 15,000 interior square feet across four levels, putting the mansion's price per square at about $300. That's 34% lower than the $436 average price per square foot seen in the Englewood Cliffs' August home sales data, according to Redfin.

So why did the price of the fancy White House plummet? Pais offers her insight. While she appreciated the home's history and its architecture, which dates back to 1926, some potential buyers did not. And for those who were fans of the home's Mediterranean-villa inspired exterior and the ornate details inside, there were other issues.

For some potential buyers, the $13,653 a month in real estate taxes was a tough pill to swallow and the cost of renovating a home of this size didn't help. Pais pegs the budget for updating at between $3 million to $5 million.

"We brought in athletes, CEOs from around the country," she said. Through the pandemic, Pais said she held both in-person and virtual showings.

"Ultimately, it was the renovation. For these people, it required too much updating," Pais said.

And it wasn't just the money that had to be spent to fix it up. It was also the time it would take to complete.

There was also an ownership issue that made closing a deal more challenging.

"It wasn't a traditional sale or seller. This was corporate-owned, and there were multiple decision makers," Pais said. "In order to get it [an offer] voted through all the decision makers needed to be on same page."

She had an earlier offer that was higher than $4.6 million, but the home's owners declined it, she said.

"When you first put a home on the market, it's not uncommon to try to get as close to the asking price as possible," she explained.

Pais said the clients wanted to hold out and see if they could get a better deal closer to the asking price.

It's a common strategy many of her clients will try, but it's risky.

"Sometimes the first offer is the best offer and sometimes it isn't," she said.

In this case, the earlier offer was the better offer, but that wasn't clear until months later. By then, the opportunity to sell at a higher price vanished, leaving the sellers with a $4.6 million dollar deal.

Interestingly, after all those price adjustments the old white house closed at almost the same price it traded for 21 years ago. Public records show the estate sold in 2000 for $4.67 million.