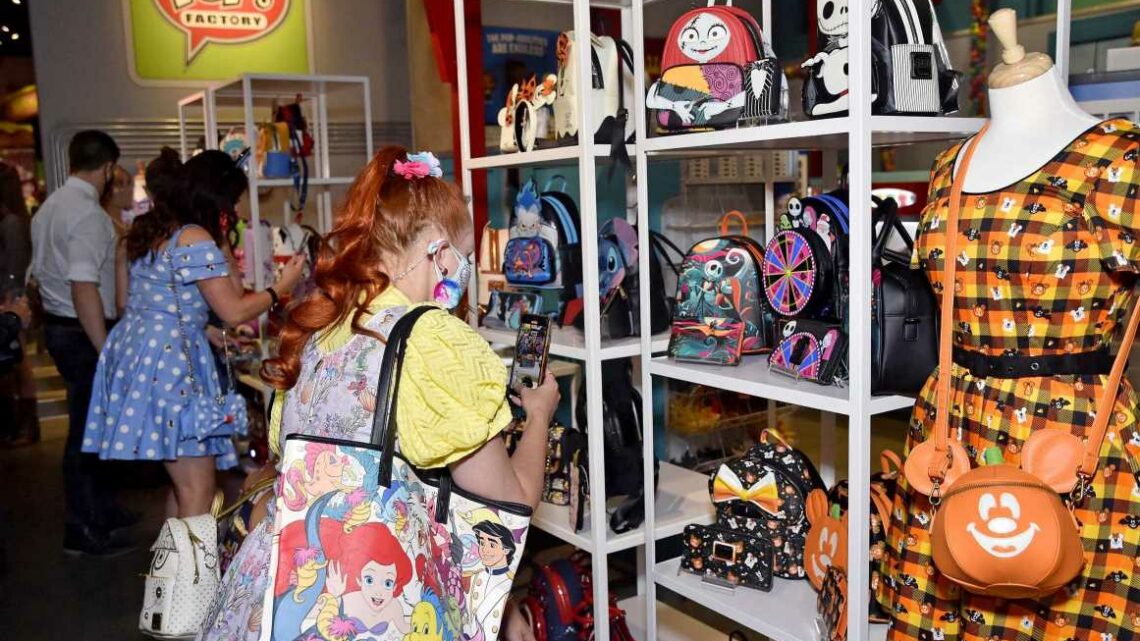 You can tell from the Star Wars posters on the walls of their home and the shelves packed with Disney princess and Masters of the Universe merchandise that Derrick Baca and Liz DeSilva really are the super nerds they claim to be.

The couple run Loungefly, a collectible fashion and accessory brand, owned by pop culture giant Funko — and business is good.

On Thursday, the company reported that sales of Loungefly-branded products soared 132% to $29.6 million during the second quarter. While Loungefly accounted for only 12.5% of Funko's total sales, it is a fast-growing brand and has thrived even during the pandemic, thanks in part to Baca and DeSilva.

"I honestly think they could be as big as Funko one day," Funko CEO Brian Mariotti said. "We are just growing leaps and bounds."

Funko's net sales rose 141% to $236.1 million in the second quarter from $98.1 million a year earlier. The robust revenue growth helped the company post net income of $20.9 million, or 34 cents a share. In the year ago period, it lost $15 million, or 30 cents a share. After adjustments, Funko earned 40 cents per share in the latest period.

Because of the pandemic, Funko was forced to invest more heavily in its direct-to-consumer business. From April through June, these sales rose 190% and now make up 11% of all Funko sales. This online strategy has benefited Funko's core line of collectible pop figures — which saw sales jump 137% during the second quarter to $185.4 million — as well as Loungefly.

Change at the top

Mariotti has been at the helm since he bought Funko in 2005 from founder Mike Becker. That will change on Jan. 3 when it he steps down as CEO and takes on the role of chief creative officer. Andrew Perlmutter, Funko's president, will become CEO, and Mariotti will continue on Funko's board.

As CEO, Mariotti acquired smaller companies in order to build out new retail opportunities, namely a Funko Games division, which creates board games, and Loungefly, which designs accessories, and now, apparel.

Mariotti said he tried to buy Loungefly for about three years before he finally struck a deal.

"I just saw this amazing small company putting out the coolest backpacks and the coolest purses," he said.

Founded in 1998, the brand was bought by Funko in 2017. Baca and DeSilva joined two years later. The former is Loungefly's vice president of sales, merchandising and business development, and DeSilva is creative vice president.

Premium backpacks, wallets, purses and fanny packs has been its specialty, but it recently expanded into apparel and enamel pins. Most recognizable are Loungefly's mini backpacks, which often feature bold patterns based on popular entertainment franchises or are shaped to look like iconic characters.

"Loungefly has been a great success under Funko's ownership," said Stephanie Wissink, Jefferies managing director. "They've found the right balance between fostering growth through capital investment, guidance, access to more licenses and talent while allowing the brand to bloom authentically. It's the same brand as it was at the acquisition, it's simply larger and more accessible."

It also proved that Funko could successfully use acquisitions to grow, according to Wissink.

"The success speaks not only to the company's ability to identify quality assets but also the ability to bolt on new categories that still link back to the same core ethos — fan culture."

Some of the credit goes to Baca and DeSilva, who said they saw an opportunity to elevate the brand. With decades of experience working in licensing and merchandising, the pair made several major changes when they came on board.

Previously, they said, retailers like Hot Topic, Box Lunch and the Disney Parks dictated what Loungefly created based on what they wanted to sell. Baca and DeSilva took back control. They created a core line of Loungefly products and then worked with retailers to design exclusives.

They also partnered with more mom-and-pop retailers and bolstered Loungefly's online offerings. At the same time, the duo prioritized social media and engaged with its fans to build a community.

Baca and DeSilva also improved the quality, adding size-inclusive straps and intricate details such as embossed metal rivets. This allowed the company to raise prices.

The number of distributors and third-party Amazon sellers also was reduced. The move allowed the brand to police its pricing standards.

"We do well online and with a lot of our mom-and-pops that have websites because the consumer knows what they are going to get when you get a Loungefly," Baca said on a video conference call from the home he shares with DeSilva. "You have a trust level with the quality, especially as we've been elevating it as we go."

That served Loungefly well during the pandemic, when its customers were not able to venture into brick-and-mortar locations to purchase bags, wallets and purses. Instead, they bought products online.

"[Mom-and-pops] were a really small percentage of our business, and we've grown that exponentially," Baca said. "Actually, it's a big part of why you saw 82% growth [in the first] quarter."

DeSilva works with a team of artists and designers to create unique fashion-forward accessories that "tell a story."

DeSilva said she and Baca like to look beyond the style guides that licensors like Disney, Warner Bros. and Universal provide them and key into moments that fans connect to the most. This includes making bags that feature Stitch from "Lilo and Stitch" in a hula outfit or Pascal, the pet chameleon from "Tangled," wearing a pink dress that Rapunzel made him.

Loungefly plans to expand its licensing to Major League Baseball, the National Football League, various anime properties and old favorites like My Little Pony and She-Ra.

Mariotti said the brand, which he playfully calls "Geeky Gucci" and "the Chanel of pop culture," has grown tenfold in less than four years.

"You know, you can't walk around with your Pop," he said, when asked about how Loungefly fits into Funko's portfolio, "but you sure as heck can walk around with your backpack or purse or your wallet. It's such a wonderful way to celebrate the things you love. And when you are walking around, people know what your fandom is."

Disclosure: NBCUniversal is the parent company of Universal Studios and CNBC.

This is how Coca-Cola comes up with new flavors
Technology