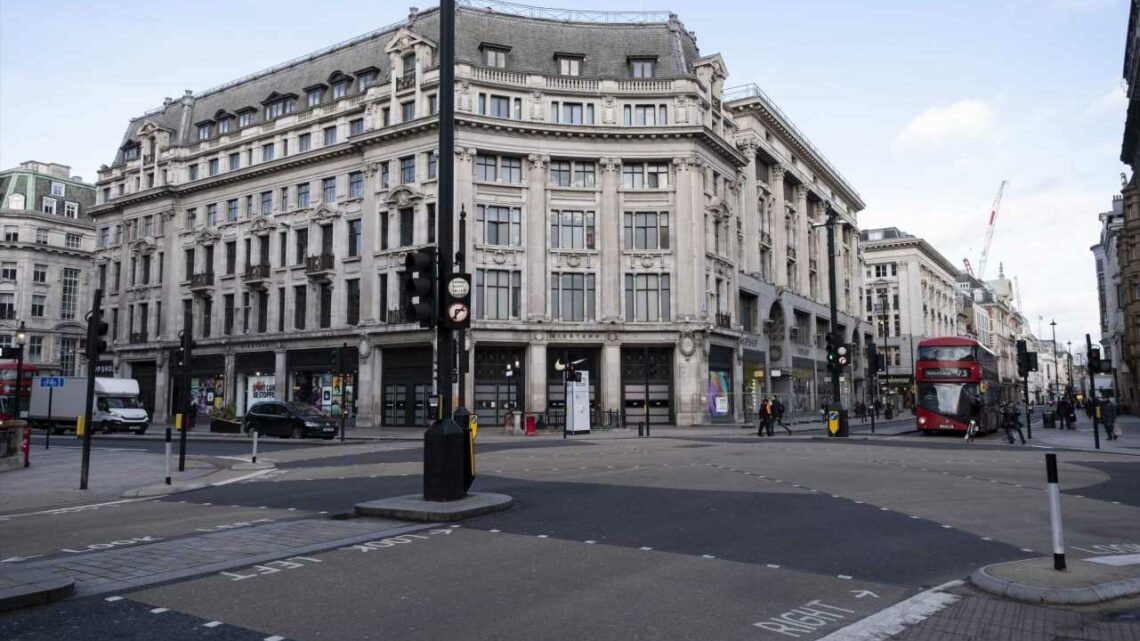 The coronavirus pandemic and the resulting social restrictions have severely challenged retailers, with many unable to keep their doors open.

The U.K. saw 20,000 store closures during 2020, a significantly higher number compared to the levels seen in 2019 and 2018, the Royal Institution of Chartered Surveyors said in a report last month.

Two big U.K. retail names, Debenhams and Topshop, entered administration last year and were recently bought by two online-only retailers. Both deals exclude physical stores and it's just their brands that are being snapped up.

In October, Gap said it was considering closing all its stores in Europe and, in the meantime, one of its two shops on the famous Oxford Street shopping parade would close.

This reality is transforming main street, known as the high street in Britain, and the way we shop.

Neil Shearing, group chief economist at Capital Economics, told CNBC that pandemics and other shocks don't cause big behavioral shifts out of the blue, but they "accelerate changes that were previously underway, one of those is of course the shift to shopping online."

Move away from retail

Internet sales in Britain as a percentage of total retail sales rose from 19% to 33% between February and May last year, according to the U.K. office for national statistics, as the U.K. entered its first lockdown. That figure hit a record 36% in November.

Over the 12 months to December, the share of internet sales grew by roughly 10 percentage points, the ONS also said.

Shearing predicts "a shift in the use of high streets probably after the pandemic away from retail and towards particularly more things to do with leisure."

He expects the high street will have more "community activities" such as restaurants, coffee shops, cinemas and theaters.

Prior to the pandemic, main street was already facing a move toward more experience-focused spaces. Even retailers were trying out new ways to keep customers in store for longer.

For instance, Topshop on London's Oxford Street offered live music and customers could get a haircut on the lower ground flower of the store. Others had opted to incorporate small coffee places and personal stylists too. This trend is expected to gain further momentum.

"It is right to expect some conversion of commercial into residential to the extent we see a drop in commercial real estate," Edward Glaeser, professor of economics at Harvard University, told CNBC.

"We have seen a big trend in urban spaces from commercial spaces that sell goods to commercial real estate that sells experiences, so the coffee shop replaces the toy store. That's likely to continue," he said.

This trend is clear in plans to revamp London's Oxford Street. On the back of a £2.9 billion ($3.97 billion) public and private investment, the street is getting a revamp which may take a few years.

Speaking to CNBC Monday, Jace Tyrrell, chief executive of the retail business group New West End Company, said the transformation is still going ahead but with a delay because of the pandemic. Rather than having the plans concluded next year, Tyrell expects it to be done by 2024.

The overhaul is bringing more leisure and cultural spaces, such as a cinema inside Selfridges' department store, a new sustainable food market and a new space for events.

The overall idea is to provide more social offerings to retain visitors beyond their normal shopping hours and attract others that are simply looking to socialize. The area is also due to benefit from further transport facilities, which could bring in more people from outside the British capital.

There are two big structural changes, according to Tyrrell, "the shift to online and the desire to consume more sustainably." To respond to the latter, Oxford Street wants to become an emission-free traffic zone.

He added that 20% to 30% of the ground floors in the area will change to include more gaming lounges, galleries and athletic-focused products.

New West End Company, which represents 600 businesses in the area, said in a report published just before the pandemic that demand for new experiences and the shift online is dictating the new brands and the tenant mix on Oxford Street. "Already the mix is moving away from souvenir shops towards more food, leisure and experiential-led offerings," it said.

In this context, retailers are also paying attention to social media. Selfridges' has a new dining area described as "Instagram-worthy" and there will be public wi-fi covering the area.

DeFi snowball will turn into a Web 3.0 avalanche