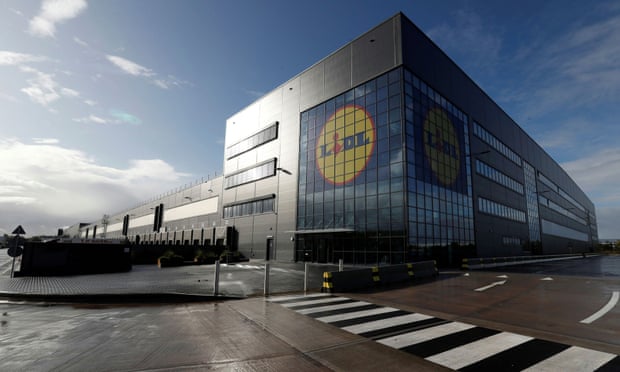 The company, which has 800 outlets in England, Scotland and Wales, said the losses followed investment of £654m in 51 new stores, the extension of 13 more sites, and the opening of a new distribution centre in Motherwell, Scotland. The business made a pretax profit of £19m a year before, but that came before a restructuring which combined the group’s store operations and property management into one company.

Lidl, which now employs nearly 24,000 staff, will invest £1.3bn this year and next with a plan to open about 50 more new stores in 2021 and shift to a new British headquarters in south-west London and build a new warehouse in Luton. The company also plans to install at least 300 electric car charging points in its car parks by 2022 and is installing solar panels on new freehold stores.

The German discount chain said it booked sales of £6.9bn in the year to 29 February 2020. While it could not provide a comparable figure from the previous year after the company reorganisation, data from market analysts Kantar indicates sales rose by about 7% during the year, making it one of the UK’s fastest-growing grocery chains.

Like almost all the grocers, Lidl has seen sales growth rise as families have been forced to cook more at home because restaurants, cafes and canteens in many schools and workplaces have been closed during the pandemic.

Sales rose by 18% in the four weeks to 27 December, compared with the same period a year earlier. The increase was larger than those at the UK’s four biggest supermarkets – Tesco, Sainsbury’s, Asda and Morrisons – and Aldi.

Christian Härtnagel, the chief executive of Lidl GB, said: “Whilst the world has changed considerably since this financial period [year to February 2020], our driving focus remains on offering customers the best quality products at the lowest prices in the market. We will continue to focus on providing customers up and down the country with this, as we grow our store estate, logistics and operations.

“We are confident in our strategy and see huge potential in the market long-term and will continue to hire more colleagues, invest in British suppliers, open more stores and become an integral part of more communities.”