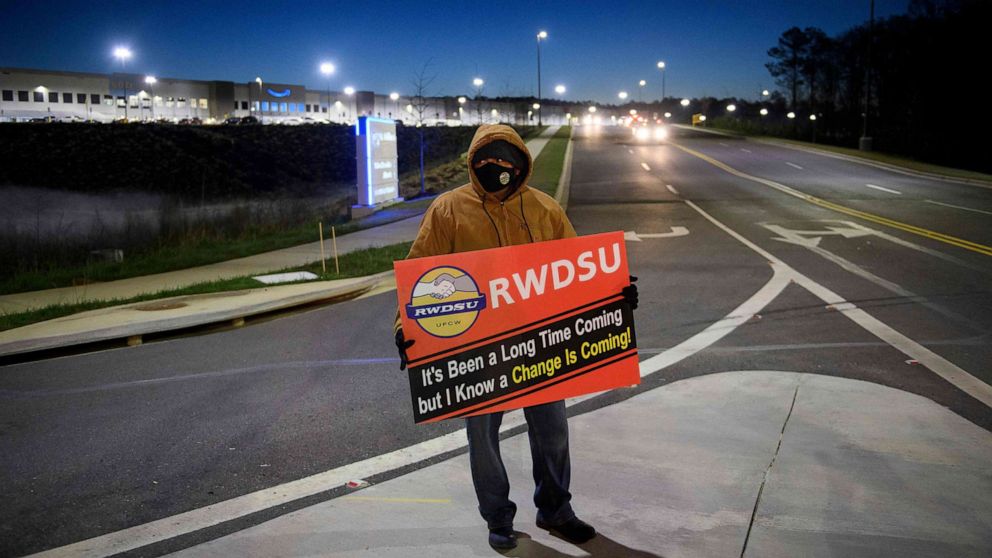 Vote counting began on Tuesday to determine if workers in Bessemer, Alabama, will form the first-ever labor union at an Amazon warehouse in the U.S.

The unionizing efforts at one of the largest employers in the nation has drawn the attention of lawmakers and beyond, as many view the watershed vote as a keystone moment in the organized labor movement that has languished in the U.S. in recent decades.

“Amazon is such a huge player in the economy, and the tech sector hasn’t been one that the union movement has much representation in at all,” Alex Colvin, the dean of Cornell’s School of Industrial and Labor Relations, told ABC News Tuesday. “It could be a real shift if we started to see organizing at Amazon.”

Colvin said a union formation in Alabama could set a “precedent” and inspire other Amazon workers across the country to follow suit.

“Amazon has a lot of facilities around the country and a lot of employees,” he added. “If this is the start of a broader movement towards unionization at Amazon, that would be a big deal to the economy.”

The National Labor Relations Board began tabulating the votes from some 5,800 workers at the Bessemer Amazon facility on Tuesday, though it is not immediately clear when the results for the vote are expected to come in.

If successful, the warehouse workers will be represented by the Retail, Wholesale and Department Store Union (RWDSU).

“This campaign has already been a victory in many ways,” RWDSU President Stuart Appelbaum said in a statement. “Even though we don’t know how the vote will turn out, we believe we have opened the door to more organizing around the country; and we have exposed the lengths to which employers will go to crush their employees trying to gain a union voice — this campaign has become the prime example for why we need labor law reform in this country.”

Colvin told ABC News that regardless of the way the vote turns out, “We should anticipate a certain likelihood of an extended period of conflict over establishing collective bargaining at the workplace, we commonly see that after elections.”

The Alabama workers’ unionizing efforts have drawn support from lawmakers on both sides of the aisle.

Last week, Sen. Bernie Sanders, I-Vt., visited Alabama to meet with some of the workers involved in the unionizing efforts.

“All I want to know is why the richest man in the world, Jeff Bezos, is spending millions trying to prevent workers from organizing a union so they can negotiate for better wages, benefits and working conditions,” Sanders tweeted ahead of his visit.

His tweet drew ire from Amazon executive Dave Clark, who responded to Sander’s tweet by noting that Vermont’s minimum wage is $11.75 an hour compared to Amazon’s $15, adding, “The Sen should save his finger wagging lecture until after he actually delivers in his own backyard.”

On the other side of the aisle, Sen. Marco Rubio, R-Fla., has also publicly thrown his support behind the union in an op-ed published by USA Today earlier this month.

On the day voting began for the union, President Joe Biden released a video on Twitter voicing his support for labor unions and encouraging workers to “make your voice heard.”

In response to a request for comment on the vote count commencing, Amazon told ABC News in a statement Tuesday that, “RWDSU membership has fallen 25% during Stuart Appelbaum’s tenure, but that’s no justification for Mr. Appelbaum to misrepresent the facts.”

The statement continued: “Our employees know the truth — starting wages of $15 or more, health care from day one, and a safe and inclusive workplace. We encouraged all of our employees to vote, and their voices will be heard in the days ahead.”