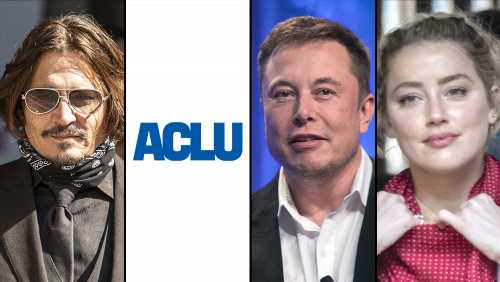 Little over three months before the trial in Johnny Depp’s $50 million defamation lawsuit against Amber Heard is set to finally start, the pink slipped Fantastic Beasts actor wants Elon Musk and the American Civil Liberties Union to be pulled into the case.

As Depp awaits a hearing in the UK next month on his hopes for an appeal in his losing libel suit late last year against tabloid The Sun for calling him a “wife beater,” his U.S. attorneys have issued subpoenas for the Space X billionaire plus the First Amendment non-profit group and its Foundation arm. Now facing a $100 million counterclaims case from his Rum Diary co-star, Team Depp want Musk and the ACLU entities to both sit for depositions in the matter, as well as hand over relevant documentation of their interactions with Heard.

In the Musk subpoena, Depp’s Brown Rudnick LLP lawyers have 24 requests that essentially cover “all communications between you and Ms. Heard regarding Mr. Depp.” Included among the two dozen requests are specific requests about The Sun case, the ACLU and “any allegations of physical abuse or domestic violence committed by either Mr. Depp or Ms. Heard.”

In the first ACLU subpoena (read it here), “topics” sought basically have the same scope, with emphasis on donations, the defamation suit and conversations about “the relationship between Mr. Depp and Ms. Heard.”

You may be wondering what do Elon Musk and the ACLU have to do with the case that Depp launched against his ex-wife in March 2019 over a late 2018 Washington Post op-ed she penned?

Well, Musk dated the Aquaman actress for a while after her marriage with Depp collapsed. However, hough the latter has repeatedly alleged that the former and Heard were romantically involved while before she and Depp split. The PayPal co-founder has denied the claims. Musk even joked last summer about settling things with Depp in a “cage fight” when his named kept coming up at the ongoing the UK libel trial. The ACLU was among the two organization that Heard said in 2016 she was donating half of her $7 million divorce settlement from Depp too.

Subsequently named an ACLU Ambassador for women’s rights, Heard was publicly thanked by at the time by the organization’s “incredibly grateful” executive director for having “so very generously shown her support.” After Heard’s WaPo op-ed on domestic violence was published in late 2018, the ACLU reposted the piece that started this whole legal battle on their website.

However, with the ACLU having seemingly turned a blind eye to previous subpoena attempts, Heard’s main lawyer Elaine Bredehoft diplomatically admitted last month that her client has been “delayed” in making her full promised charitable contributions, as promised.

This is seen as vital in the UK case, where Heard’s character and donations were a pivotal part in Judge Andrew Nichol’s reasoning to damningly find against Depp. Not long after that verdict from Judge Nichol was revealed in London, Depp was axed from the Fantastic Beasts franchise by Warner Bros. and knocked well off his A-list perch.

Neither Musk not the ACLU responded to requests from Deadline on the respective February 4 and February subpoenas. Right now, after several delays from Covid-19 lockdowns and other matters, the trial is set to start on May 17 in Fairfax County, Virginia.

The latest subpoenas come as Depp’s side wants court permission to have “non-party witnesses” give “live testimony at trial” via video link because of the ongoing coronavirus pandemic and travel restrictions.

Heard’s lawyers aren’t 100% opposed to the idea, but is concerned the “rules” have already made enough accommodations for such witnesses. A hearing on the motion is on the court calendar for February 26. Also, a February 19 hearing is set on Heard’s motion to have a conciliator appointed by the court to “assist with discovery disputes,” of which there have been many in this matter. Part of the role of that conciliator where he or she appointed, would be to “compel contact information for witnesses identified in discovery.”

In that vein is the issue of the hanging deposition for attorney and Depp advisor Adam Waldman, who at times seems to have been as much at the heart of this case as the former high profile couple. A February 3 letter made public in the court docket yesterday says that finding the usually outspoken Waldman isn’t proving easy.

“I have made multiple in-person attempts to serve Adam Waldman at two Washington D.C. addresses with this Subpoena, but was unsuccessful,” said process server Mark Simons in his correspondence to the clerk for the Superior Court for the District of Columbia (read it here). Essentially giving up, Simons says he mailed the subpoenas to the D.C. addresses and left it with the clerk’s office, “because I cannot confirm a known address from Mr. Waldman.”

Frequent tweeter Waldman has be silent on social media since January 21.

Adam Waldman did not get back to Deadline when we reached out to him about the SNAFU surrounding his subpoena.

Slouching towards the late spring trial start date, Depp’s desire to drag Musk and the ACLU into the nearly two year old case is in many ways replicating a wide net move instigated by Heard last month. In January, the actress sent out subpoenas to the LAPD and to Pirates of the Caribbean studio Disney for everything that they may or may not have on her ex-husband.

An ask that includes “body-cam” footage of LAPD 911 visits to the one-time couple’s DTLA apartment in May 2016. The LAPD subpoena also seeks internal communication at the Department on her and Depp, as well as “all documents and communications of any nature with Mr. Depp, and/or any of Mr. Depp’s agents, attorneys or others acting on his behalf, from May 21, 2016 through the present.”