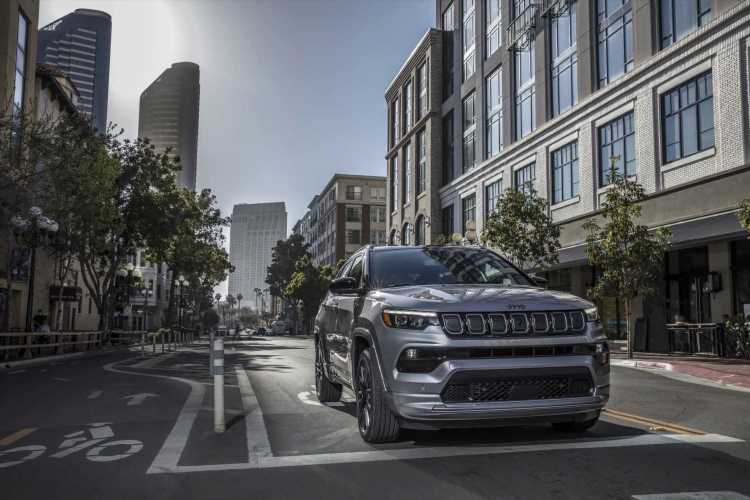 CHICAGO – Jeep is updating one of its smallest SUVs with new technologies and a redesigned interior ahead of the brand's push into electric vehicles.

The compact Compass SUV is the brand's best-selling vehicle globally. The new model is scheduled to arrive in North American showrooms starting at $24,995 – $500 more than the current model – in the fall.

Jim Morrison, Jeep's head of North America, said the added features and refreshed design are meant to make the Compass "even more desirable" in the growingly competitive small SUV segment.

Many of the updates were focused on the interior design and technology of the vehicle, while the exterior features minor changes to better match other SUVs in Jeep's lineup.

"Our goal was to raise consumer expectations of what a compact SUV interior should look and feel like," said Chris Benjamin, Jeep's North American director of interior design.

The vehicle, which is produced at a plant in Mexico, is powered by a 2.4-liter, four-cylinder engine connected to a six- or nine-speed automatic transmission. The fuel economy of the vehicle is 25 mpg combined, including 22 mpg in the city and up to 31 mpg highway.

The Compass is an important SUV to Jeep. It is a gateway vehicle alongside the smaller Renegade SUV that tend to attract new and younger buyers to the brand.

Jeep is set to unveil the 2022 Compass on Wednesday at the Chicago Auto Show. Its debut comes less than a week after its parent company, Stellantis, promised to invest about $35.5 billion into vehicle electrification. The investment includes an all-electric Jeep in every SUV segment, executives said.

Jeep currently only offers a plug-in hybrid electric version of its Wrangler SUV in the U.S. It also has announced plans for a PHEV of its Grand Cherokee later this year.

PHEV versions of the Compass and Renegade SUVs are currently available in Europe. But Jeep has not said those versions will come to the U.S.

Stellantis was formed through a $52 billion merger between Fiat Chrysler and PSA Groupe in January. It has 14 brands including Jeep, Ram, Opel, Fiat, Peugeot and Maserati.