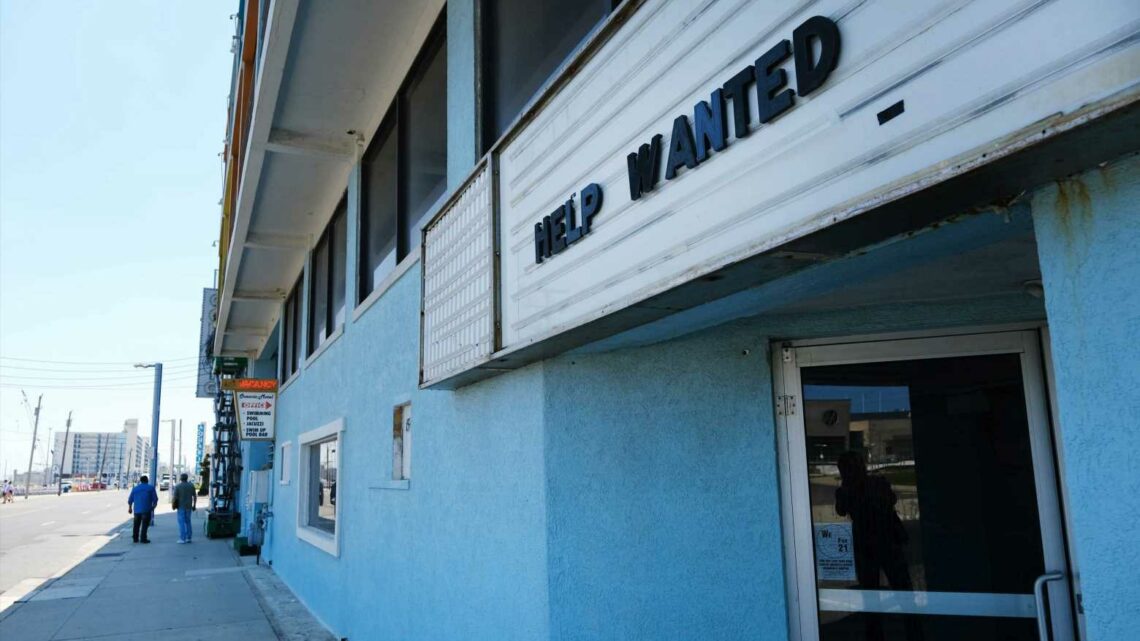 Is there a labor shortage? What the May jobs report tells us

Yet forecasters hoping for clarity from the May tally may be left scratching their heads.

It's hard to draw conclusions about sustained weakness or labor-supply issues from the data published Friday, according to economists. The May report offers something of a mixed bag and somewhat contradictory data points, they said.

"It's a Rorschach test," according to Nick Bunker, an economist at job site Indeed. "It's a bunch of ink on a piece of paper, and everyone is seeing different images."

For example, there's the headline number: The U.S. economy added 559,000 people to payrolls in May.

On one hand, some observers may use the data point to suggest workers aren't rejoining the labor force as quickly as one might expect.

The jobs figure was below economists' estimate of 671,000. At that pace, it would take more than a year to regain all the jobs lost since February, 2020.

On the other hand, job growth accelerated in May — new payrolls doubled from April. And the last few recessions were characterized by long job recoveries, economists said.

May's job gains are also roughly equivalent to the average over the past three months — suggesting they were in line with what expectations should perhaps have been, Bunker said.

"I think it's a story of expectation versus reality," he said. "What's a good pace of growth is sort of in the eye of the beholder."

That gives ammunition to observers who believe there's a labor shortage. There are about 3.5 million fewer people in the workforce relative to February, 2020.

More from Personal Finance:
Long-term unemployment is falling for first time during pandemic
Here are the best ways to tap your home for cash
This renter got more than $5,000 in assistance. What to know about applying

"The rate at which adults are participating in the workforce has been flat since last summer," Michel Strain, director of economic policy studies at the American Enterprise Institute, a right-leaning think tank, said in a tweet Friday. "This is a significant issue. Workers are not coming back."

Perhaps the most pronounced evidence of a labor shortage in the May jobs report is wage growth, especially in the labor and hospitality sector, according to Daniel Zhao, a senior economist at Glassdoor, a job and recruiting site.

Hourly pay jumped nearly 9% over the past year, to $15.87, for non-managerial workers in the sector, which includes restaurants, hotels and bars, for example. (Earnings grew by $0.19 an hour from April.)

That growth is significant since leisure and hospitality seems to be where hiring challenges are being most widely reported, Zhao said.

However, the bump may not be solely — or even mostly — attributable to businesses raising pay.

Instead, tips likely account for the pay increase as restaurants and bars return to pre-Covid customer capacity, according to Josh Bivens, research director at the Economic Policy Institute, a left-leaning think tank.

"Since December 2020, the rise in tip income, not an increase in base wages, can likely entirely explain the acceleration of wages for production and nonsupervisory workers in restaurants and bars," he wrote Friday.

Plus, leisure and hospitality jobs grew by 292,000 in May — the most of any industry and potentially undercutting the argument about worker supply. At the same time, that was a slowdown from 328,000 jobs added in April.

Critics of the labor-shortage argument point to other data points, such as average hours worked remaining relatively flat. (Businesses tend to boost hours for existing workers if they can't onboard other staff.)

"Unfortunately, the [May] report isn't going to end this debate about labor shortages," Zhao said. "Both sides have ammo to use to bolster their arguments."

To the extent that there are labor shortages, hiring challenges are likely to be temporary, according to economists.

Twenty-five states are ending enhanced federal unemployment benefits earlier than their official Sept. 6 expiration to try to encourage reentry to the labor force.

The earliest that the states, all led by Republican governors, are doing so is June 12.

"The most vocal source of speculation [for labor shortages] is that the supplement to weekly unemployment benefits is enticing a lot of people to stay home," said Erica Groshen, a labor economist at Cornell University and a former commissioner of the Bureau of Labor Statistics during the Obama administration. "I think that's far too simplistic."

Economists point to a host of other factors that may also be dampening a return of workers to the labor force: child-care duties, ongoing health risks, health complications for Covid long-haulers, early retirements, career changes or reassessments, and a high historical share of workers who are furloughed and expect to be recalled to their prior workplace.

However, it's impossible to quantify the extent to which any of these factors are playing a role during the economic recovery, experts said.

"These factors interact with unemployment insurance, which can allow workers to take longer to rethink their careers, try to find jobs in new industries and negotiate for higher wages — but can also slow employment growth and prolong long-term unemployment," according to Harvard University economists Jason Furman and Wilson Powell III.