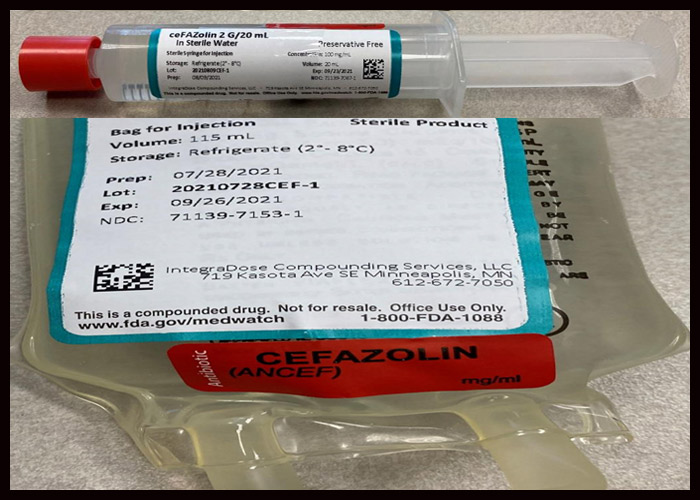 IntegraDose Compounding Services, LLC has recalled a total of eleven lots of antibiotic medication cefazolin in the form of injection for the potential lack of sterility assurance, the U.S. Food and Drug Administration or FDA said in a statement.

The lack of sterility resulted from compounding in a newly installed biologic safety cabinet without completing dynamic smoke study testing.

The FDA warned that the intravenous administration of a non-sterile drug could result in serious infections ranging from fever, chills, and malaise, to severe adverse events such as septicemia, bacterial meningitides and wound infection which may be life-threatening.

Cefazolin is an antibiotic and the products are packaged in zip-locking bags containing ten units. The recall involves nine lots of cefazolin 2 gram in 20 mL syringe and two lots of cefazolin 3 gram in 100 mL 0.9% sodium chloride bag, with expiration dates between September 17 and September 26, 2021.

However, the company has not received reports of any adverse events associated with this issue for these recalled lots, which were distributed across the U.S. to hospitals between August 12 and September 15, 2021.

The Minneapolis, Minnesota-based company urged anyone with an existing inventory of the recalled lots to stop use and distribution of the recalled product and quarantine it immediately.

IntegraDose Compounding has initiated an investigation to determine the root cause and corrective and preventative actions. Though the possibility of a breach in sterility assurance in the distributed product lots in not confirmed, but cannot be eliminated.

This recall is seen as a precautionary measure as no batches of product have been identified as containing microorganisms.