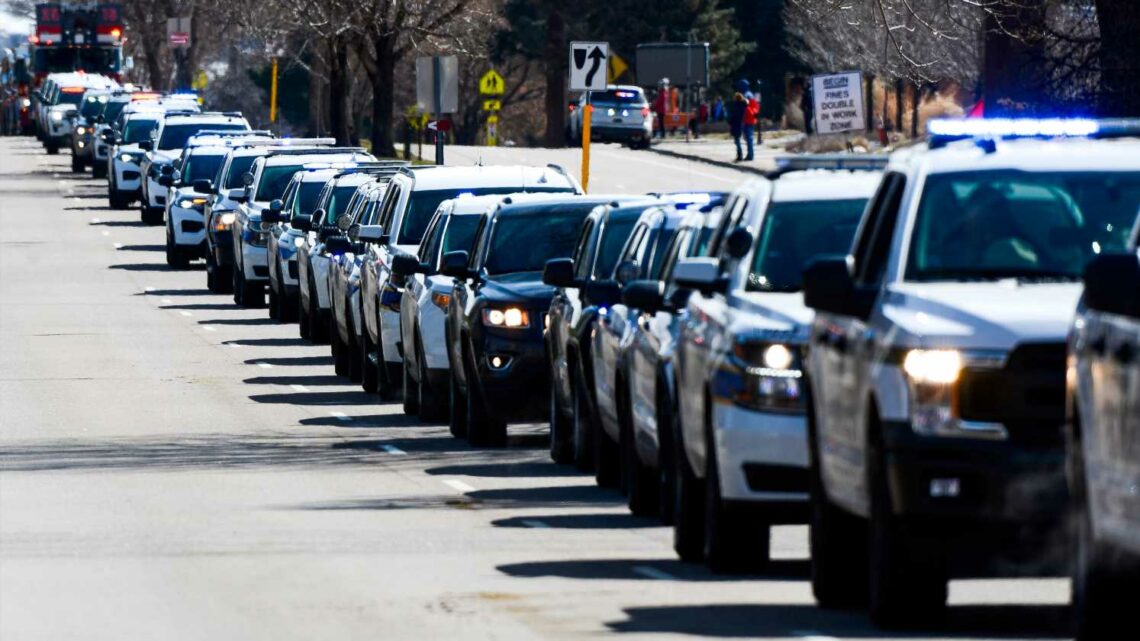 LAFAYETTE, Colo. – A slain Colorado police officer credited with preventing more deaths in a mass shooting at a supermarket was being honored at a memorial service before he is laid to rest Tuesday.

More than 500 law enforcement vehicles took part in a procession that escorted the hearse carrying Officer Eric Talley’s body to the service at Flatirons Community Church in the city of Lafayette. A line of officers waited for Talley’s flag-draped casket to arrive, then his family followed it inside the church, escorted by police.

Members of Colorado police and fire departments walked in playing bagpipes at the end of a long procession of mourners, including officers from across the U.S.

The church is about 10 miles east of Boulder where Talley, 51, and nine other people were killed after a gunman opened fire at a grocery store on March 22.

Boulder shooting: Eric Talley answered ‘most dangerous call’ in law enforcement. How police strategy has evolved over the years

A procession of law enforcement vehicles escort a hearse carrying the body of slain Boulder Police officer Eric Talley to a memorial service at Flatirons Community Church on March 30, 2021 in Lafayette, Colorado. Ten people, including Talley, were killed in a shooting at a King Soopers grocery store in Boulder, Colorado on March 22. (Photo: Michael Ciaglo, Getty Images)

The service is open to the public, but attendance in the church’s auditorium, which normally holds up to 4,200 people, is restricted because of the coronavirus pandemic. Organizers urged people to watch a livestream on television news stations.

The program for the ceremony included a poem written by Talley’s seven children for Christmas 2019, called “Our Unsung Hero.” It praises Talley for doing whatever they ask of him and risking his life. It ends with a line asking for his protection: “May God bless and protect you/And bring you home each day.”

Boulder police chief: Eric Talley died a hero, but we’ll have scars from his loss forever

A hearse carrying the flag-draped casket of fallen Boulder, Colo., Police Department officer Eric Talley arrives at a memorial service at a church Tuesday, March 30, 2021, in Lafayette, Colo. Talley and nine other people died in a mass shooting at a King Soopers grocery store on Monday, March 22, in nearby Boulder. (Photo: David Zalubowski, AP)

A day earlier, a Roman Catholic Mass conducted in Latin was celebrated for Talley at the Cathedral Basilica of the Immaculate Conception in Denver, where Archbishop Samuel Aquila said Talley sacrificed his life and showed what is best about police officers, whom he said are too often “taken for granted.”

The casket carrying the body of fallen Boulder, Colo., Police Department officer Eric Talley is carried by a Denver Police honor guard to a waiting hearse after a service at the Cathedral Basilica of the Immaculate Conception Monday, March 29, 2021, in Denver. Talley and nine other people were killed on Monday, March 22, during a mass shooting at a grocery store in Boulder. (Photo: David Zalubowski, AP)

Officers arrived at the grocery store one minute and 40 seconds after being alerted to the shooting last week, according to Boulder police. They said Talley led an initial team of officers inside within 30 seconds of arriving and that the gunman fired at them, killing Talley.

“No other individuals were shot or killed after these brave officers engaged the suspect,” police said in a tweet last week.

Mourners line the procession route during a memorial service for slain Boulder Police Officer Eric Talley at Flatirons Community Church on March 30, 2021 in Lafayette, Colorado. Officer Talley was one of ten people killed in a shooting at a King Soopers grocery store on March 22 in Boulder, Colorado. (Photo: Chet Strange, Getty Images)

Ahmad Al Aliwi Alissa, 21, who was wounded in the leg, has been charged with 10 counts of first-degree murder and one count of attempted first-degree murder over shots fired at another officer. Prosecutors expect to file more charges as the investigation progresses.

One of Alissa’s public defenders told a judge during his first court appearance that they needed to assess Alissa’s mental illness but did not provide details about his condition.

His next court hearing will be May 25. His attorneys asked for at least two months before returning to court so they could evaluate his condition and review evidence from investigators.

Talley grew up in Albuquerque, New Mexico, and took an untraditional route to becoming a police officer. He had a master’s degree in computer communications but left his office job to join the department in 2010 at age 40 because he wanted to serve his community, his father Homer “Shay” Talley has said.

Slevin reported from Denver. Nieberg is a corps member for the Associated Press/Report for America Statehouse News Initiative. Report for America is a nonprofit national service program that places journalists in local newsrooms to report on undercovered issues.

Live COVID-19 updates: US, other nations challenge WHO report on origins of virus; coach wants testing dropped for Final Four