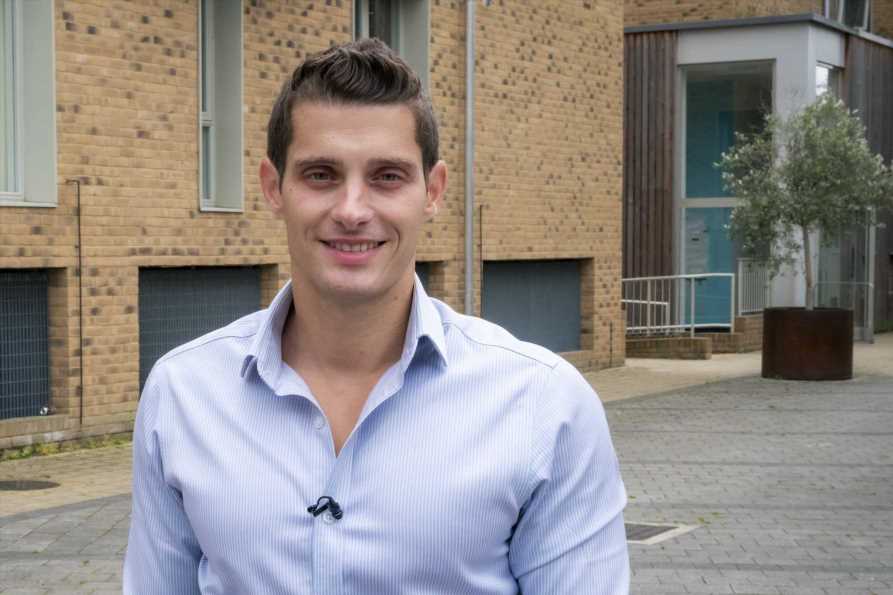 How this 34-year-old saved $400,000 and bought his own apartment outside of London

This story is part of CNBC Make It's Millennial Money series, which details how people around the world earn, spend and save their money.

As a 10-year-old growing up in Athens, Greece, Alex Symeonoglou got hooked on a TV show about the stock market, called "Limit up, Limit down."

"I didn't understand anything, but I absolutely loved watching it," he tells CNBC Make It.

By the time he was a college student in the U.K. in 2004, Symeonoglou says he was tracking stocks on a daily basis and was even getting involved in his father's investments.

Today, he jokes that his passion for investing has become like a "second job." And at 34, Symeonoglou has already amassed an investment pot worth $410,795. (CNBC Make It converted all the figures from GBP to USD).

"It's actually the thing that I talk about the most with all my friends and family," he says.

When he's not watching the stock market, Symeonoglou works as a strategic assistant and chief of staff for a large pharmaceutical company in London and earns about $181,000 a year. That includes his base salary and bonus, as well as $9,311 from an annual company car allowance, an uncommon perk in the U.K., and money from selling some of his vacation days each year.

How he spends his money

Here's a look at how Symeonoglou typically spends his money, as of July 2021.

Symeonoglou bought his two-bedroom apartment before it was fully built, or "off-plan," in Maidenhead, Berkshire, in 2015. He decided to buy in Maidenhead because it's close enough to drive into London, but he could also get more for his money by not living in the city.

He doesn't plan to live there long-term though. "If all goes well, then I will rent it out in order to have some passive income, while I transition to another flat or house, whether in the U.K. or abroad," he says.

Since the U.K.'s coronavirus restrictions eased, Symeonoglou has started regularly hosting cocktail parties again. He says mixology is probably his most expensive hobby, with a single party costing as much as $274. However, it averages out to about $41 per month.

Each party has a theme and a menu, and allows Symeonoglou to try out new recipes, he explains. One party favorite has been his personal recipe of vodka, Aperol, passion fruit syrup, pineapple juice and lime juice, which he calls "Playful Youth."

Symeonoglou lived in Athens until he left for college at 18. He studied business, marketing, economics and finance at Lancaster University in the U.K. before moving back to Greece to serve in the military, which is compulsory for men between the ages of 19 and 45.

After serving in the navy for 11 months, Symeonoglou started a nutritional supplement drop shipping and importing business in Greece, which he ran from 2008 to 2011. Drop shopping is when someone markets and sells a product without actually taking on the cost or risk of buying and storing the stock themselves.

When it comes to money, his father has always been his role model. He not only taught Symeonoglou how to manage money, but instilled in him the importance of living "beneath your means" and not using money to show off.

Because of that, Symeonoglou follows his monthly budget "very strictly," he says. Sometimes, he even does so to his detriment, such as when he chooses to save money rather than spend it on seeing friends.

At the same time, Symeonoglou says he does occasionally "unexpectedly splurge," like when he bought his Audi in July 2019. Despite getting a "good deal" on the car, he admits it was something he probably didn't need and the money would have been "better put aside to invest or save."

To keep up with his investments, Symeonoglou says he checks the news and looks at stock prices multiple times a day.

"One of the most important principles when investing is that I need to understand what the company is," he says.

When buying an individual company's stock, he evaluates its current performance, how he thinks it will perform in the future and its specific numbers, such as revenue and debt. He thinks about each company's long-term growth and avoids "get rich tips."

"It's not trying to make a quick profit or become a billionaire in a month," Symeonoglou says.

He also says "emotional resilience" is important when it comes to investing. He's learned to stay calm despite fluctuations in the prices of his stocks.

However, Symeonoglou generally invests in index funds, which are less risky and tend to outperform active stock picking. All of his new investments in 2021 have been in index funds and he plans to gradually sell all of his positions in individual stocks.

Symeonoglou says that one of the biggest mistakes he's made has been to invest in companies he doesn't know much about, which on a couple of occasions cost him as much as 60% of the money he invested.

Beyond progressing in his career, Symeonoglou would also like to try living in another country and start a family of his own.

Over time, he has realized that while he is career-focused, having a good family life is the most important thing to him.

"Happiness will not come from a bigger house or more expensive car or watch," he says. "It will come from having a family and very close friends."

And unlike those who aim for early retirement, Symeonoglou plans to work past 66, the typical retirement age in the U.K.

"One of the things that I like about working is not the money or the job title, but it's actually the opportunity to be useful and make an impact in my life," he says.

What's your budget breakdown? Share your story with us for a chance to be featured in a future installment.