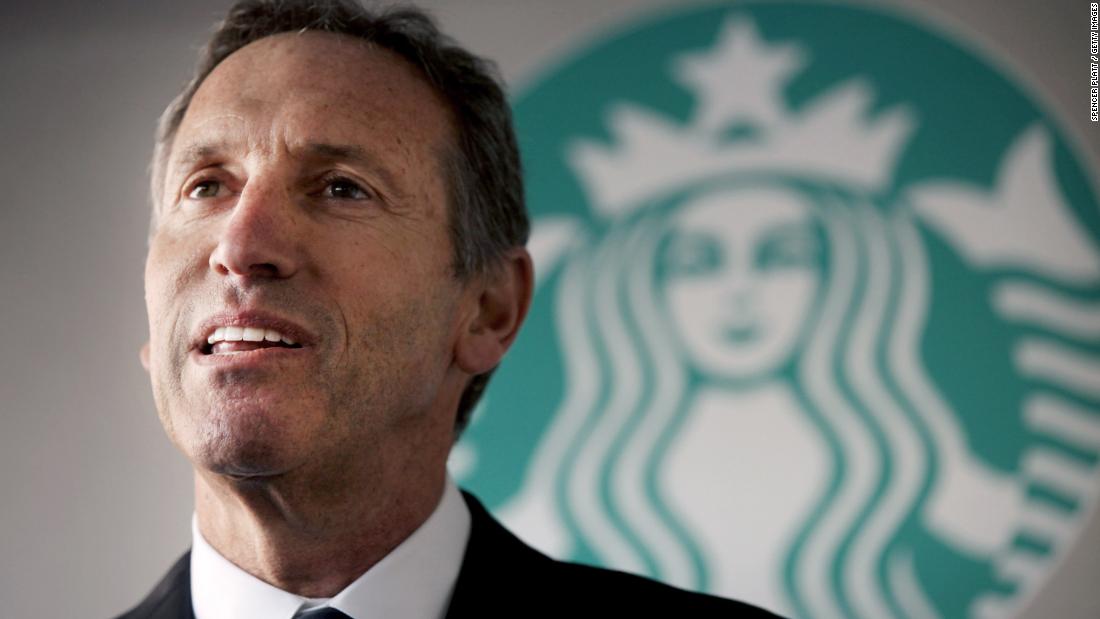 How Howard Schultz's father drove him to build Starbucks

New York (CNN Business)There’s a common misconception about Howard Schultz and how he got his start at Starbucks: He didn’t found the company; he pleaded for a job there in 1982 when he was 29 years old.

He got the job, and about a year later, as Starbucks’ director of retail operations and marketing, Schultz went to Milan for a trade show. As Schultz describes it, he had an “epiphany” while he visited espresso bars around the city. Coffeehouses, he realized, could serve as an important “third place” between work and home, where communities gathered. He convinced his bosses to test a coffeehouse concept in downtown Seattle, but at the time, they weren’t ready to fully commit to the idea. 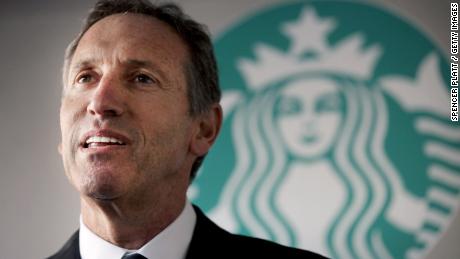 So Schultz left the company and started his own coffee shop, Il Giornale, selling brewed coffee and espresso. In 1987, Starbucks was looking for a buyer. With the help of local investors, including Bill Gates’ father, Schultz bought Starbucks’ six stores.
Today, Starbucks has 28,000 stores in 77 countries. It has returned more than 18,000% to investors, including dividends, since Schultz took the company public in 1992. At the time Schultz announced his departure from Starbucks (SBUX), it had a market value of around $78 billion.
Now, Schultz believes he can run America. He said Sunday that he is seriously considering running for president as a “centrist independent” in 2020. The news created a dust-up among some Democrats who worry Schultz could siphon votes from their party, adding yet another layer to an already complex campaign cycle. But politics aside, Schultz’s 36 years at Starbucks left plenty of evidence of how he might serve as president.

As CEO and chairman, he took action on crucial political issues, including health care, immigration, race, the wage gap, education and safety net programs. He oversaw tens of thousands of employees around the globe.
Schultz ran Starbucks like a haven for progressive ideals. He ensured employees could receive a living wage and benefits, get a degree and take care of their families. He built an environmentally conscious company. But he also had several missteps along the way, including confrontations over race relations and gun laws.
He was never a politician, but if Schultz wants to be president, voters can look to his record at Starbucks for hints about his leadership. Like President Donald Trump, Schultz’s career, management style and political activity will have to stand in for voting records and legislative feats.

Howard Schultz came from a humble beginning. He grew up in public housing in Brooklyn, New York and was the first in his family to graduate college, earning an athletic scholarship at Northern Michigan University.
After graduating in 1975, Schultz worked for Xerox, where he quickly impressed his bosses and moved up the ranks. He was later recruited to work at Hammarplast, a Swedish housewares company, as its US general manager.
The legend of Schultz’s Starbucks career begins in 1981, when he walked into Starbucks’ original location at Pike’s Place Market in Seattle to investigate why it was buying so many of Hammarplast’s espresso machines. The store made quite the first impression: Schultz has said he determined then that the small coffee shop was destined for greatness.
He left New York and Hammarplast and started his career at Starbucks in 1982 when he became part owner and the company’s director of retail operations and marketing. Starbucks had just four stores at the time, and it only sold beans — not brewed coffee. 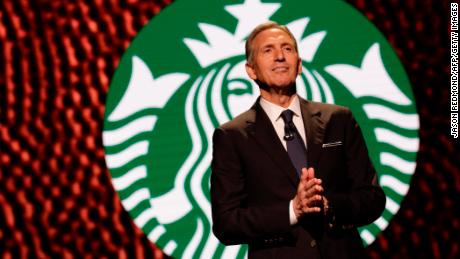 Schultz took his trip to Italy a year later, and says he returned with a vision to create the American coffee scene: The “third place” for people to go between home and work.
“Howard Schultz was a tremendous CEO, creating one of America’s most iconic brands and desired products,” said Tim Hubbard, a management professor at the University of Notre Dame’s Mendoza College of Business.

An inclusive and determined leader

Schultz’s vision for Starbucks informed his management style — the way he treated employees and customers.
“Providing the world with a warm and welcoming third place may just be our most important role and responsibility,” he wrote in his exit message to Starbucks’ employees last year. “Today and always.”
Schultz believed happy employees perform excellent service, resulting in happy customers. To train staff in his vision for customer service, Schultz set up workshops for baristas, whom Starbucks calls “partners.” Schultz says he believes its employees from top to bottom are partners in the company’s shared success. The company provides all employees (not just executives) with “bean stocks,” Starbucks’ name for stock options.

The entire company's history is based on 'we are all in this together.'"

“As a leader, he has always had a strong presence and capability to communicate a vision to his employees,” Hubbard said. “As a president, I imagine he would take a very supportive, ‘work-across-both-sides-of-the-aisle’ approach.”
Schultz could also be undeterred when he got an idea stuck in his head. For example, Schultz was repeatedly turned down for a job by Starbucks founder Jerry Baldwin. He continued to plead with Baldwin for a year, finally getting the “yes” he had been waiting for since 1981. Similarly, when Schultz returned from Italy with his cafe idea, Starbucks’ management told Schultz the idea was contrary to the company’s business model. Schultz eventually bought the company outright to see his vision through.
Schultz stepped down as CEO but remained chairman in 2000 and the company fell on hard times. Starbucks had overexpanded and lost its focus when it went all-in on breakfast sandwiches. Competitors gained market share and Starbucks failed to convince customers their products were worth the price. When he returned as CEO in 2008 after an eight-year hiatus, Schultz was quick to refocus the company on its core mission: He closed all the company’s stores for a day and retrained its staff to focus on customer service.
He also wanted Starbucks stores to smell like coffee again. Breakfast sandwiches had overwhelmed stores with the smell of fried dough. Schultz paused that experiment when he returned.
The gambit paid off — Starbucks’ stock has gained more than eight-fold since then.

Schultz’s single-mindedness could get him into trouble at times. He believes in himself and his gut instincts — but they’re not always right.
That was never clearer than when Schultz decided to encourage Starbucks employees to engage customers in discussions about race relations. After police shot and killed Michael Brown, an unarmed black man, in Ferguson, Missouri, in 2014, Starbucks asked baristas to write “Race Together” on coffee cups. The experiment was widely ridiculed. Schultz initially defended the idea as “the right thing to do,” but the company pulled the project shortly after it launched.

Schultz is a complicated person. He has titanic ambition and all the problematic hubris that goes with it."

Schultz also had a disastrous tenure as majority owner of the Seattle SuperSonics basketball team from 2001 through 2006. He publicly feuded with players and traded away star player Gary Payton. The team snapped its 11-year run of winning seasons in 2003, and Schultz sold the team to owners who relocated the Sonics to Oklahoma City — making Schultz a pariah among many basketball fans in Seattle.
In his new book, “From the Ground Up,” which Schultz is currently promoting, he said the sale was a “tremendous mistake,” admitting he “had squandered the very public trust” he had bought into.
“Schultz is a complicated person. He has titanic ambition and all the problematic hubris that goes with it,” said Bryant Simon, history professor at Temple University and author of “Everything But the Coffee: Learning About America from Starbucks.”

Over time, Schultz developed Starbucks into one of the most progressive employers in the United States.
Since 1988, Starbucks has offered health care to all employees — both full-time and part-time — including coverage for domestic partners. Last year, the company said it reached gender and race pay equity for all American staff.
In 2015, Schultz set up the Starbucks College Achievement Plan, letting employees go to college tuition-free online at Arizona State University. Education is one of Schultz’s obsessions: He built a philanthropic foundation to improve childhood literacy.
Schultz’s employee benefits weren’t just altruistic, they made good business sense. Turnover rates for shift workers are high, but health care, education and higher wages helped retain staff.
“It was a classic move of giving something to gain a stable workforce in an unsteady environment,” said Simon. “It was a very clear strategic gambit on his part.”
Schultz, who endorsed Hillary Clinton in the 2016 election, is also a frequent critic of President Trump, criticizing his corporate tax cut, immigration policies and his demeanor in office.
“I think we’ve seen such vitriolic display of bigotry and hate and divisiveness, and that is not the leadership we need for the future of the country,” Schultz told CNN’s Poppy Harlow in 2016.
In 2017, Schultz responded to the Trump administration’s travel ban by announcing Starbucks would hire 10,000 refugees over five years.

I think we've seen such vitriolic display of bigotry and hate and divisiveness, and that is not the leadership we need for the future of the country."

He has also knocked Democrats for proposals he deemed too left-wing, including single-payer health care and guaranteed income. On Tuesday, following a CNN town hall in which Democratic presidential candidate Kamala Harris endorsed Medicare for All and said she wants to eliminate private health insurance, Schultz called her position “not correct” and “not American.” He also noted he disagrees with the Republican push to repeal the Affordable Care Act.
“The Affordable Care Act should stay and be refined,” Schultz said in an interview on CBS News, noting that he views both sides as “far too extreme.” “The silent majority of America does not have a voice,” he added.
In 2010, Schultz refused to take action when Second Amendment activists protested gun control advocacy by taking guns into stores in places with open-carry laws. And he said the federal government’s $21 trillion in debt is the greatest threat facing the country, and he wants to change entitlement programs to reign in government spending.
Yet in a speech to Starbucks shareholders in 2016, Schultz said he feared that the opportunities that allowed him to achieve his American Dream have escaped the grasp of too many people.
“The American Dream can’t be only accessible to people of privilege who are white and live in the right zip code,” he said.
Race relations are a passion — but also a struggle — for Schultz.
The company drew protests last year after two black men were arrested while they were waiting inside a Philadelphia store. Starbucks closed 8,000 stores for an afternoon to teach employees about racial bias, and Schultz went on a media blitz to apologize. 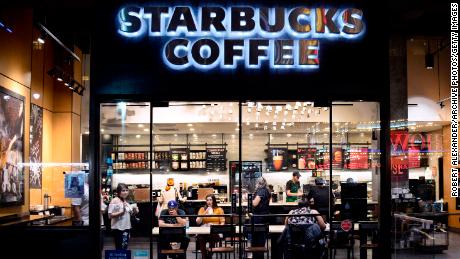 “The situation was reprehensible,” Schultz said in an open letter, which also ran as a full-page ad in the New York Times, USA Today and two Philadelphia papers. “The entire company’s history is based on ‘we are all in this together,” he told CNN at the time.
Plenty of CEOs want to be president, but Schultz made political activism part of his business strategy, setting him apart from other would-be CEO presidents.
“These events would have sensitized him to issues we don’t normally see in top executives across the United States,” Hubbard said.

Trump may have broken down the barrier for business leaders with no public service experience. But if Schultz runs, he’ll have a career of progressive activity to run on.
Source: Read Full Article

UMA Price Up 26% In Anticipation of Across Launch
Technology