Here's why the Pentagon is so interested in UFO sightings

US Navy pilots and sailors won’t be considered crazy for reporting unidentified flying objects, under new rules meant to encourage them to keep track of what they see. Yet just a few years ago, the Pentagon reportedly shut down another officialprogram that investigated UFO sightings. What has changed? Is the US military finally coming around to the idea that alien spacecraft are visiting our planet?

The answer to that question is almost certainly no. Humans’ misinterpretation of observations of natural phenomena are as old as time and include examples such asmanatees being seen as mermaids anddriftwood in a Scottish loch being interpreted as a monster.

A more recent and relevant example is thestrange luminescent structure in the sky caused by a SpaceX rocket launch. In these types of cases, incorrect interpretations occur because people have incomplete information or misunderstand what they’re seeing.

Read more: Why Harvard scientists think this interstellar object might be an alien spacecraft

Based on my prior experience as ascience advisor to the Air Force, I believe that the Pentagon wants to avoid this type of confusion, so it needs to better understand flying objects that it can’t now identify. During a military mission, whether in peace or in war, if a pilot or soldier can’t identify an object, they have a serious problem: How should they react, without knowing if it is neutral, friendly or threatening? Fortunately, the military can use advanced technologies to try to identify strange things in the sky.

“Situational awareness” is the military term for having complete understanding of the environment in which you are operating. A UFO represents a gap in situational awareness. At the moment, when aNavy pilot sees something strange during flight, just about the only thing he or she can do is ask other pilots and air traffic control what they saw in that place at that time. Globally, thenumber of UFO reportings in a year has peaked at more than 8,000. It’s not known how many the military experiences.

Even the mostheavily documented incidents end up unresolved, despite interviewingdozens of witnesses and reviewing many written documents, as well as lots of audio and video recordings. 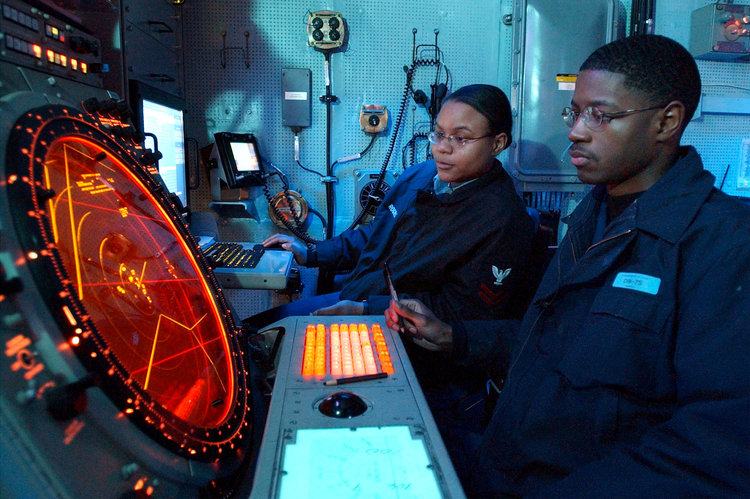 In this photo provided by the US Navy, air traffic controllers aboard the USS Harry S. Truman monitor aircraft departures in the Carrier Control Approach suite in the Mediterranean Sea.Andrea Decanini/US Navy/Getty ImagesUFOs represent an opportunity for the military to improve its identification processes. At least some of that work could be done in the future by automated systems, and potentially in real time as an incident unfolds. Military vehicles — Humvees, battleships, airplanes, and satellites alike — are covered in sensors.

It’s not just passive devices like radio receivers, video cameras and infrared imagers, but active systems like radar, sonar and lidar. In addition, a military vehicle is rarely alone — vehicles travel in convoys, sail in fleets and fly in formations. Above them all are satellites watching from overhead.

Military vehicles bristle with antennas, cameras and sensors of all kinds.US Army

Sensors can provide a wealth of information on UFOs including range, speed, heading, shape, size, and temperature. With so many sensors and so much data, though, it is a challenge to merge the information into something useful.

However, the military is stepping up its work onautonomy and artificial intelligence. One possible use of these new technologies could be to combine them to analyze all the many signals as they come in from sensors, separating any observations that it can’t identify.

In those cases, the system could even assign sensors on nearby vehicles or orbiting satellites to collect additional information in real time. Then it could assemble an even more complete picture.

For the moment, though, people will need to weigh in on what all the data reveal. That’s because a key challenge for any successful use of artificial intelligence is building trust or confidence in the system. For example, in afamous experiment by Google scientists, an advanced image recognition algorithm based on artificial intelligence was fooled into wrongly identifying a photo of a panda as a gibbon simply by distorting a small number of the original pixels.

So, until humans understand UFOs better, we won’t be able to teach computers about them. In my view, theNavy’s new approach to reporting UFO encounters is a good first step. This may eventually lead to a comprehensive, fully integrated approach for object identification involving the fusion of data from many sensors through the application of artificial intelligence and autonomy. Only then will there be fewer and fewer UFOs in the sky — because they won’t be unidentified anymore.