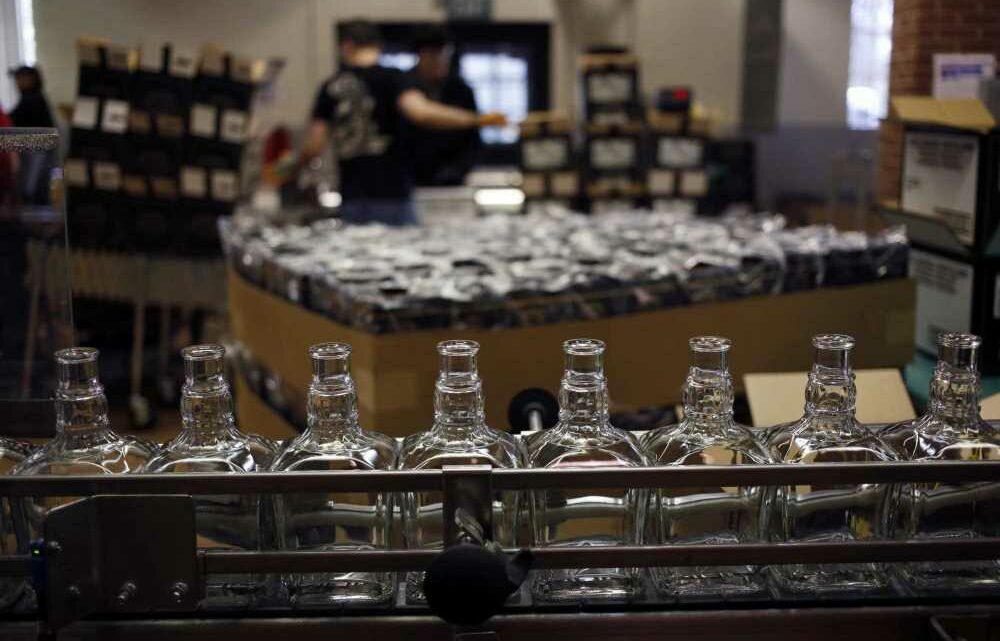 From whiskey distillers in the humble hills of Kentucky to winemakers in the sunny slopes of California, the demand for glass bottles has outpaced supply this year, a chain reaction triggered, in part, by the coronavirus pandemic.

The world's supply chain — already lengthy and tangled in the United States — is continuing to bear the brunt of surging consumer demand, labor shortages and overseas manufacturing delays, which has led to higher transportation costs and inflation.

David Ozgo, chief economist for the Distilled Spirits Council, said glass shortages are being felt throughout the sector, whether it's tequila or vodka or whiskey.

"Some of the large distillers, even though they have multiyear contracts for millions of bottles, they're finding in some instances that they have to pick and choose as to which bottle sizes, they're going to get," Ozgo said. This could eventually lead to even tighter supplies of smaller-volume bottles down the line because the emphasis will likely go on the more popular sizes, the 750 milliliter and the 1.75 liter.

In the short term, some consumers may have to put in more effort to find their favorite booze.

"From the consumer's perspective, if there's a special bottle that you want for the holiday season, you might have to go back to the store a few times before you find it," Ozgo said. "But I will say this, there are over 16,000 spirits-based products marketed in any given year. So this might be the opportunity to try a new drink."

Castle & Key distillery in Frankfort, Kentucky, is among the many distillers that have pivoted glass suppliers in the face of supply chain woes.

"The factory that we were working with in the U.K. had a coronavirus outbreak and had to completely shut down so that put our production way behind schedule by at least a few months," said Jessica Peterson, the distillery's director of operations.

Peterson said that when operations in the U.K. reopened, the distillery was forced to address supply chain issues and therefore had to transition to air freight temporarily due to delays facing sea cargo.

"The preferred method typically would be sea freight," Peterson said, adding that sea freight costs had tripled during the pandemic.Since then, the distillery has shifted to a supplier in Guadalajara, Mexico, that delivered orders via rail.

"Since the transition, we've been able to have a steady supply of glass," Peterson said.

"I've heard from other folks that the demand for shipping containers has gotten so high that they've gone to paying close to $6,000, upwards of $20,000, for just the container. And that's just, that's just insane," she said.

In order to avoid future supply chain pinches, the distillery no longer orders six months in advance but at least two years ahead of schedule, Peterson said. Still, the disruptions have increased the distillery's cost of production, she said.

"At current, we have not passed on a price increase for consumers. But that could definitely come," she said.

Made in the USA

New York-based supplier Waterloo Containers has been hiking its prices for imported glass for its clients. Most of Waterloo's inventory for glass wine and spirits bottles comes from the United States, with about a tenth originating from outside the country. Its domestically produced glass has seen smaller price increases, largely due to higher freight and energy costs, according to Bill Lutz, its president and owner.

Problems with Waterloo's imports started about six months ago, Lutz said. However, with such a small portion of its glass imported, Waterloo has seen its orders double this year as supply chain issues have emerged and wineries and distilleries hunted for new suppliers.

Waterloo is also a stocking supplier rather than following the "just-in-time" model, so it always has extra inventory on hand.

"We have actually shipped more bottles to the West Coast here from our business this year than we have in the last 20 years," Lutz said.

Most of the glass bottles used in the U.S. come from outside the country. Years ago, glass manufacturers shifted production to countries where glass could be made more cheaply — mostly in Asia.

Mauricio Perez, North American regional director for Panamanian glass supplier BPS Glass, estimated that 60% to 70% of glass bottles used in the U.S. came from China, at least before the Trump administration's trade war. Tariffs on glass imports from China convinced some manufacturers to import glass from factories in Europe or Latin America instead to meet demand.

For winemakers outside the U.S., the problem is more dire. Wine and spirits makers in Latin America are facing tougher shortages because the shift by some companies during the trade war to use glass made in countries like Chile rather than China, according to Perez.

It's a situation that's not easily solved. It can take a year or two to build glass furnaces or establish new production lines.

"Glass supply can't come back to the United States because there's just not enough glass capacity at the manufacturers anymore," Lutz said.