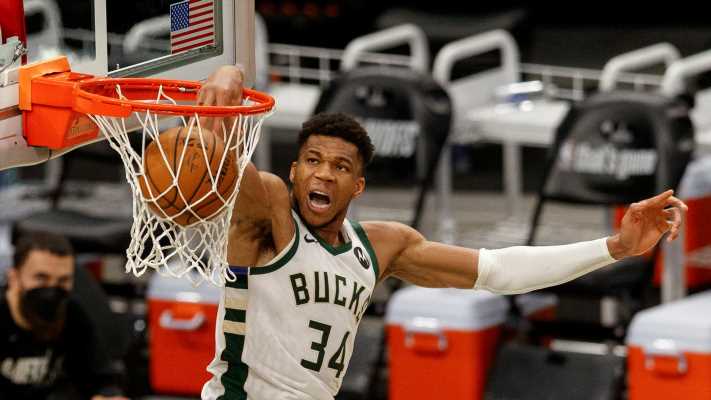 The Milwaukee Bucks generated better offense, the Brooklyn Nets sustained another injury to an All-Star and a series that once tilted in Brooklyn’s favor is now tied.

The Bucks defeated the Nets 107-96 in Game 4 on Sunday, evening their Eastern Conference semifinals series at two games apiece.

Game 5 is Tuesday in Brooklyn (time to be determined, TNT).

Milwaukee star Giannis Antetokounmpo played his best game of the series with a game-high 34 points and 12 rebounds, and Jrue Holiday had his most effective game against the Nets with 14 points and nine assists.

Nets All-Star Kyrie Irving sprained his right ankle in the second quarter and did not return. He landed on Antetokounmpo’s foot and turned his ankle after a shot attempt near the basket.

Kyrie Irving twists the ankle of his after landing on Giannis’s foot and comes out the game into the locker room. 🙏 #NBAPlayoffspic.twitter.com/BIgPGqjARv

The Nets are also without All-Star James Harden, who hasn’t played since aggravating his hamstring in 43 seconds into Game 1 against the Bucks. Nets coach Steve Nash said Harden is progressing but still has a “gap to make up” before returning.

Injuries continue to have an impact on the playoffs, and the Nets head into Game 5 with the possibility of no Harden or Irving.

After Brooklyn won the first two games of the series at home, it appeared the Bucks were headed for their second consecutive exit in the second round of the playoffs.

It look dire from the outside, especially after Brooklyn’s 125-85 victory in Game 2, but the Bucks stayed focused on winning at home. They snuck out a Game 3 victory and produced their best game of the series on Sunday, using their trademark defense and improved offense to slow the Nets.

Trailing 36-25 in the second quarter, the Bucks used a 12-0 run to take the lead and then begin to pull away. Milwaukee extended the lead in the third quarter and built a 19-point lead in the fourth quarter.