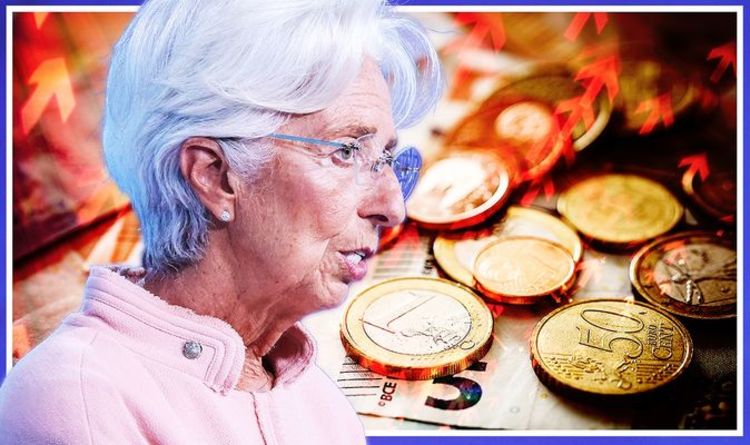 The figure is the highest on record in 25 years and exceeds forecasts from Reuters of 4.5 percent. The biggest driver of inflation has been energy prices, which have soared 27 percent. The figures come following inflation stats from Germany on Monday which found inflation climbing to levels not seen since the boom following reunification. Preliminary data showed inflation in Germany at six percent based on the harmonised consumer price index.

Germany, which is the EU’s largest economy, has been badly by hit by supply chain issues and energy costs.

In the last week, GDP has slumped to low levels of growth while business and consumer confidence has fallen.

Carsten Brzeski, Global Head of Macro for ING Research, described Germany’s short term outlook as “rather dark and pessimistic”, predicting inflation would be unlikely to peak and begin to fall until next year while GDP could end up slightly over zero.

Meanwhile, in France, inflation rose to its highest level in 13 years – increasing to 3.4 percent.

Poland also revealed its flash inflation figures on Tuesday, showing a higher than expected jump to 7.7 percent – a decade high.

The unprecedented rise in inflation across Europe raises serious questions for the European Central Bank (ECB).

Despite inflation now standing at beyond double the Bank’s two percent target, it has so far resisted any suggestion of raising interest rates.

ECB president Christine Lagarde has consistently suggested interest rates will not move until 2023, with expectations of inflation starting to fall in January.

Speaking yesterday to German broadcaster ZDF, ECB board member Isabel Schnabel said: “If we thought inflation would permanently settle above two percent, we would definitely react.

“However, at the moment, we see no indications of this.”

As a first step before raising interest rates, the Bank could cut back on measures designed to stimulate the economy such as buying bonds.

The growing fears around a fourth wave of Covid in Europe and potential new restrictions due to the spread of the Omicron variant are also creating uncertainty.

“The ECB have their work cut out for them as member state’s inflation experiences and expectations diverge and the political ramifications that occur as a result.”

The central bank will next meet on December 16 when any decision on rates and financial stimulus will be announced.