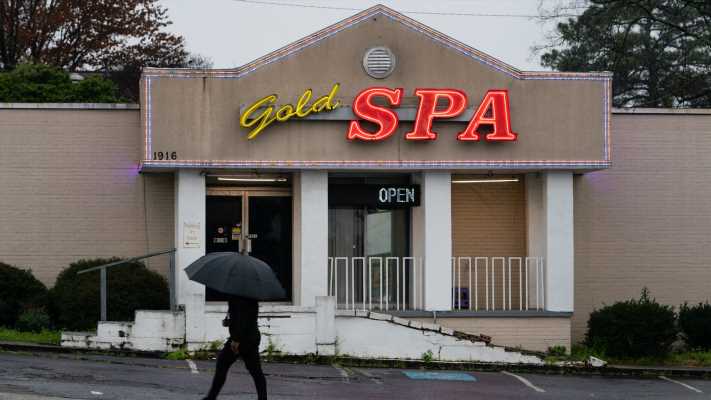 Authorities on Wednesday said Robert Aaron Long, who is suspected of killing eight people, six of whom were Asian women, at three spas in Georgia on Tuesday was officially charged by authorities with eight counts of murder. Cherokee County Sheriff Frank Reynolds said Long, 21, of Woodstock, Georgia, will appear in court for his arraignment Thursday. Four of the counts against Long are related to shootings at a spa in Acworth, which is in Cherokee County. The other four counts are related to shootings at two spas in Atlanta. Rodney Bryant, Atlanta’s police chief, said it was too soon in the investigation to say whether the shootings were a hate crime. Reynolds said Long told authorities that his actions were not racially motivated and that he had a sex addiction. Long had been in rehab for sex addiction and was wracked with guilt about his sexual urges, according to two people who lived with him in transitional housing. Grace Kao, an expert on Asian American studies and the sociology department chair at Yale University, said it was hard to disentangle race from the killings.

Atlanta-area Asian Americans share their thoughts on shootings at three local spas that left eight dead, six of whom were Asian women.

President Joe Biden’s top national security advisers will meet with Chinese diplomats Thursday in a high-stakes showdown that could determine whether Washington and Beijing are headed for a new “cold war” or a diplomatic thaw. Secretary of State Antony Blinken and National Security Advisor Jake Sullivan will lead the two days of talks in Anchorage, Alaska, which come a day after the U.S. sanctioned 24 Chinese officials over Beijing’s crackdown on political freedoms in Hong Kong. The administration has signaled it will take a hard line on Hong Kong, as well as on China’s mass internment of Uyghur Muslims, aggression toward Taiwan and trade coercion against Australia.

State department spokesperson Ned Price previewed some of the issues that will be discussed when senior U.S. and Chinese officials meet next week in their first face-to-face talks since President Joe Biden took office. (March 11)

Jury selection in the trial of Derek Chauvin to continue

Jury selection is scheduled to resume Thursday morning in the trial of former Minneapolis police officer Derek Chauvin, who is charged with second-degree murder, third-degree murder and second-degree manslaughter in the May 2020 killing of George Floyd, a Black man. The incident sparked protests worldwide. Two more jurors were chosen Wednesday, replacing two who were cut because they said they couldn’t be impartial after hearing about the city’s historic $27 million settlement with Floyd’s family. “We’re back where we started this morning, but it’s better than being behind,” Hennepin County District Judge Peter Cahill said. No jurors were selected Tuesday. Nine of 12 jurors have been seated so far; two alternates will also be selected. Five of the nine jurors identify as white, one as multiracial and three as Black, according to the court.

Questioning of potential jurors resumed Wednesday in the trial of Derrick Chauvin. A potential Black juror who expressed negative views about the Minneapolis Police Department said George Floyd was an example of another Black man "killed" by police. (March 17)

There will be a continued threat of widespread severe storms across the Southeast into Thursday, Weather.com reported. School systems in Alabama and Mississippi canceled classes, planned online sessions or announced early dismissals because of the threat. On Wednesday afternoon, a tornado reportedly damaged homes in Wayne County, Mississippi, the National Weather Service said. At least nine tornadoes were reported across the South Wednesday, the weather service’s Storm Prediction Center said: Six in Alabama, two in Mississippi and one in Louisiana. No injuries were reported. The weather service also issued more than 50 tornado warnings in Alabama, Arkansas, Texas, Mississippi and Oklahoma. More than 30,000 homes and businesses in Mississippi and Alabama were still without power Wednesday night, according to poweroutage.us.

A rare "particularly dangerous situation" tornado watch was issued by the National Weather Service for portions of Mississippi and Alabama.

The logistics of the 2021 NCAA men’s basketball tournament have led to a slight shift in the traditional Thursday-Sunday schedule of marathon action from the first and second rounds.  With mandatory COVID-19 tests and quarantining upon arrival for participants, first round games will instead start a day later, on Friday.  As a result, the four play-in games — normally played on Tuesday and Wednesday — will all be played on Thursday. The game of the night features NCAA Tournament blue blood programs UCLA and Michigan State facing off (9:57 p.m. ET, TBS) for the right to move on and face BYU Saturday.

SportsPulse: It's time to fill out your bracket and our college basketball guru Scott Gleeson is here to provide you four potential Cinderellas that will either bust your bracket or help you rise above the rest.