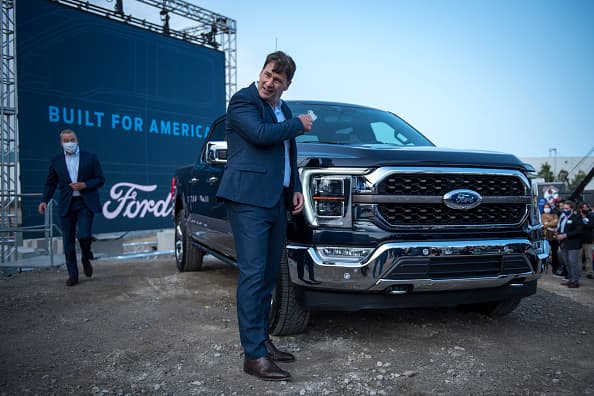 DETROIT – Ford Motor's stock price has more than doubled since Jim Farley became CEO a little less than a year ago, and yet he says the shares "absolutely" have more room to run as he begins to lay the groundwork for a massive turnaround plan.

"There's a growing confidence that Ford will be one of the winners in this new digital transformation in the industry," he told CNBC during a phone interview Monday shortly before the company announced plans to invest $11.4 billion in U.S. production of electric batteries and vehicles. "We have a lot of incredible upside."

Shares of the automaker closed Monday up by 2.8% to $14.16 a share, a 113% increase since Farley became CEO on Oct. 1. The stock was up by about 4% during premarket trading Tuesday. Still, Farley isn't satisfied with the company's current market valuation at $56 billion. It trails other key competitors, including General Motors at $77.5 billion or EV market leader Tesla at $755.5 billion.

Farley said the joint venture with South Korean battery maker SK Innovation is a good example of company's ongoing transformation under his Ford+ turnaround plan that was announced in May. The plan aims to make existing operations more profitable and better position the automaker for emerging segments such as data as well as connected, autonomous and electric vehicles.

"I would say this is the largest transformation of Ford since the Model T scaled," Farley said. "I don't think we've been fully recognized, yet, for our winning status in this digital transformation of our industry."

Farley's predecessor, Jim Hackett, was heavily criticized for not pivoting more quickly into new technologies such as electric and autonomous vehicles. He previously said that Ford saw "no advantage" in producing its own battery cells.

The investment with SK is in addition to $30 billion the company previously said it would invest in electric vehicles through 2025, about $7 billion of which had already been invested before February.

Aside from the harder pivot to EVs and turnaround plan, Farley has recruited high-profile executives to the automaker such as former Tesla and Apple executive Doug Field and Mike Amend, who was most recently president of online for Lowe's.

"I'm really proud of our team and I'm especially proud of the team we've assembled," Farley said. "We have a lot of fantastic Ford leaders and we have incredible new talent in the company."

Elon Musk throws another dig at Jeff Bezos' approach to space: 'You cannot sue your way to the moon'
Technology