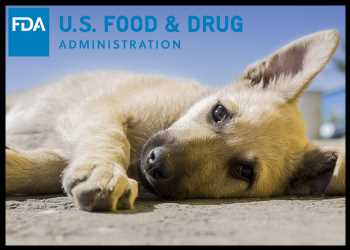 The regulator noted that Tanovea is the first conditionally approved new animal drug for dogs to achieve its full approval.

Lymphoma, also called lymphosarcoma, is a type of cancer of the lymph nodes and lymphatic system that can affect many species, including dogs. Lymphoma originates from white blood cells called lymphocytes. The cause of canine lymphoma is unknown.

In Tanovea, the active ingredient is rabacfosadine, a substance that kills rapidly growing cancer cells. The drug’s effectiveness and safety was demonstrated in a well-controlled clinical field study involving 158 dogs diagnosed with multicentric lymphoma with at least one enlarged peripheral lymph node.

The study found that Tanovea extended the median survival rate by 61 days and for dogs with a complete response to the drug, the median progression-free survival was extended to 168 days.

The drug comes in a concentrated form and, once diluted, is injected into a vein over a period of 30 minutes. The treatment is repeated every three weeks for up to a total of five administrations.

Only a licensed veterinarian can prescribe Tanovea because professional expertise is needed to correctly diagnose lymphoma in dogs, determine the best treatment, and manage potential side effects.

Tanovea received conditional approval under the MUMS program in December 2016. The agency had found the drug was safe for the intended purpose and had a “reasonable expectation of effectiveness” for treating lymphoma in dogs.

The conditional approval allowed the drug manufacturer to market Tanovea for a period of time while collecting additional study data to meet the “substantial evidence” standard of effectiveness for full approval.

The FDA’s MUMS program is intended to make more medications legally available to veterinarians and animal owners to treat minor animal species and uncommon diseases in the major animal species.

Tanovea is an injectable drug, while the FDA in January this year conditionally approved first oral tablet Laverdia-CA1 to treat dogs with lymphoma.

Steven Solomon, director of the FDA’s Center for Veterinary Medicine, said, “While canine lymphoma affects fewer than 70,000 dogs in the U.S. annually, it accounts for up to 24 percent of all cancers in dogs, making it one of the most significant canine cancers. For the first time, dog owners have the assurance of a treatment that has fully met the FDA’s standards for effectiveness in dogs.”