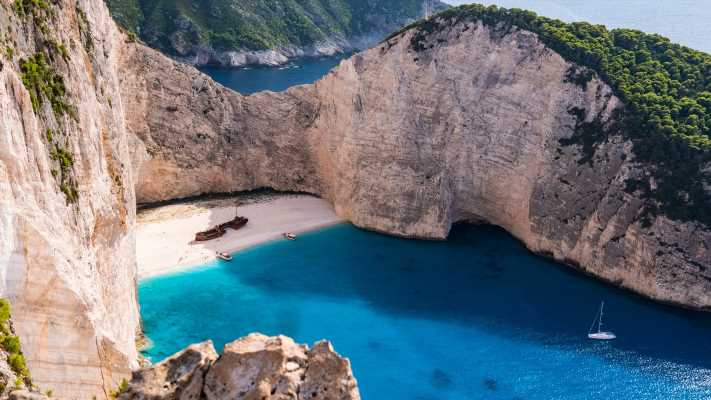 The claim: A series of images show Tanner’s Beach in Georgia

“Tanner’s Beach, Carrollton, Georgia,” the user captioned the images, which were shared to Facebook on March 31.

The post, which has over 600 shares and 200 reactions, includes three different photos of a lagoon with crystal clear water and ships near the shore.

Many users in the comments expressed skepticism, writing, “I would love to know where this really is bc it is not in Georgia,” and “My daughter’s friend works for Tanner Beach…my daughter said it looks nothing like this.”

In a message to USA TODAY, the user said that the post was intended as a joke.

Fact check:Image claiming to show new species of coral in the Galapagos is digital art

Images were taken in Greece

One of the images claiming to show a beach in Georgia actually shows Shipwreck Beach, also known as Navagio Beach by locals, on Zakynthos island in Greece.

The original photo is viewable on Getty Images and its caption reads, “Yachts & pleasure boats moored in the turquoise waters just off Shipwreck Beach of Zakynthos.”

The boat seen stranded on the sand is the wreck of the Panagiotis, which was built in Scotland in 1937 and wrecked in 1980, according to Getty Images. An elevated view of the beach is also available on the site as a video.

Navagio Beach, Zakynthos, Greece: You’ve probably seen this little-known but much-photographed beach before, but might not know its name. With its turquoise water, sweeping white cliffs and a rusted-over shipwreck plopped on the sand, Navagio (meaning shipwreck) Beach is a popular spot for visitors to the Greek Isles. But, it’s difficult to reach: A lookout point above it is more accessible than the cove itself, which you’ll need to sail into if you want to swim or peer into the shipwreck. (Photo: Getty Images/iStockphoto)

The second image included in the post shows a lagoon in Balos, Greece, according to Lonely Planet Magazine India, which shared the photo to Twitter in April 2020.

The photo of the rocky shore was uploaded to Trip Advisor by a traveler under a review for Cloud Nine Sailing in Kefalonia, Greece.

Authentic images of John Tanner Park in Carroll County, Georgia, are viewable on carrollcountyga.com and n-georgia.com.

Fact check:Jamaica is not insulated from the COVID-19 pandemic

Images claiming to show a beach in Carroll County, Georgia, are FALSE, based on our research. The photos included in the post depict beaches in Greece, and authentic images of John Tanner Park in Carroll County do not resemble the ones seen in the post.