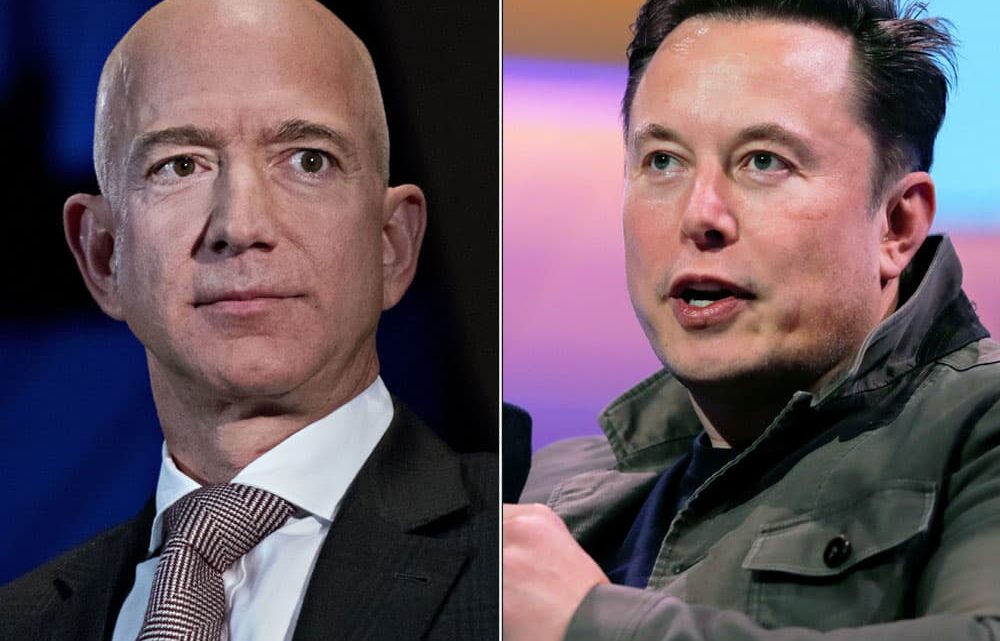 Elon Musk throws another dig at Jeff Bezos' approach to space: 'You cannot sue your way to the moon'

Elon Musk repeated prior criticisms of fellow billionaire space mogul Jeff Bezos, as their respective companies continue to battle in federal court and in front of regulators.

"I think I've expressed my thoughts on that front – I think he should put more of his energy into getting to orbit, [rather] than lawsuits," Musk said Tuesday at the CodeCon 2021 conference in Beverly Hills, California.

"You cannot sue your way to the moon, no matter how good your lawyers are," Musk added.

Bezos' Blue Origin is suing SpaceX, by way of NASA, in the U.S. Federal Court of Claims over a $2.9 billion astronaut lunar lander contract the agency awarded Musk's company earlier this year. Blue Origin went on a public relations offensive in August after the Government Accountability Office shot down the company's protest, with Bezos' venture calling SpaceX's Starship rocket an "immensely complex & high risk" way to deliver NASA astronauts to the moon.

Additionally, Amazon has filed protests to the Federal Communications Commission over SpaceX proposals for its Starlink satellite internet. Amazon is working on its own satellite internet, called Project Kuiper, and said in a filing that SpaceX's latest Starlink amendment "fails every test" of the FCC.

Musk's company responded by pointing out that Amazon "has lodged objections to SpaceX on average about every 16 days this year," with the CEO following up on Twitter.

"Filing legal actions against SpaceX is *actually* his full-time job," Musk tweeted of Bezos on Sept. 1.

Musk, speaking to Recode editor-at-large Kara Swisher at CodeCon, said he didn't know why Bezos wasn't putting more effort into the space company he founded in 2000. While Bezos has doubled the amount of time he spends weekly at Blue Origin, as CNBC reported on Monday, his commitment is limited to two afternoons a week.

Asked by Swisher if Musk has recently spoken to Bezos, Musk said he has "not verbally" but does "subtweet, if you will."

"I have encouraged him to emphasize getting to orbit," Musk told Swisher.

Musk also said he thinks it is "cool" that fellow billionaires Bezos and Sir Richard Branson are "spending money on the advancement of space."

"I think [ultimately humanity should] want to be a space-faring civilization out there among the stars," Musk said. "All these things that we see in science fiction – movies and books – we want those to be like real one day, not always fiction. So I think it's good that people are spending their money advancing space technology."