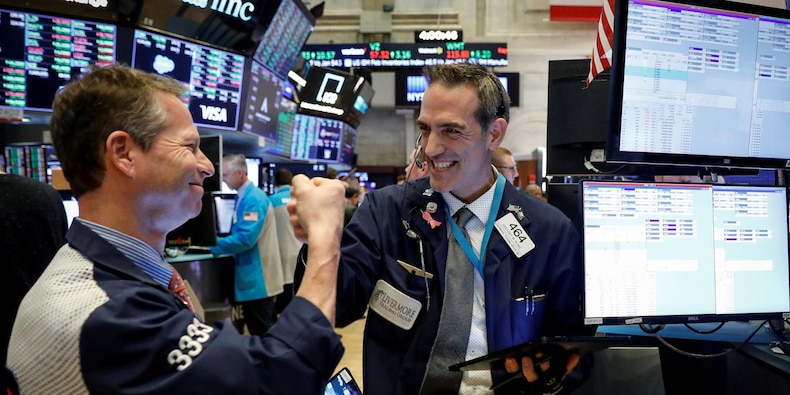 The Dow and S&P 500 closed at record highs on Thursday after better than expected weekly jobless claims and retail sales data boosted confidence that the economic reopening is progressing.

US retail sales also surged higher in March, according to data from the Census Bureau. Retail sales surged 9.8%, nearly double economist expectations of a 5.8% gain. The surge higher in retail sales came amid warmer weather and as stimulus checks began to work its way into the US economy. The retail sales data was the strongest since May of 2020.

Here’s where US indexes stood at the 4:00 p.m. ET close on Thursday:

Cathie Wood’s Ark Invest funds are bullish on Coinbase, which bought about $250 million worth of the crypto-exchange platform for three of its ETFs in Wednesday trades.

The trading debut of Coinbase Wednesday helped drive a surge in bitcoin and ethereum on Thursday. Ethereum soared to a record high over $2,400. Coinbase’s current valuation of just under $100 billion makes it more valuable than General Motors, FedEx, and Twitter.

Bank of America beat earnings estimates in the first quarter, as a roaring stock market and rebounding economy helped drive the bank’s profits.

The retail investing boom that started amid the COVID-19 pandemic continued into 2021, according to Charles Schwab, which added 3.2 million investor accounts in the quarter. That’s more accounts than Charles Schwab added in all of 2020.

QuantumScape fell as much as 15% after a short-seller report compared the company to Theranos and called it a “pump-and-dump SPAC scam by Silicon Valley celebrities.”