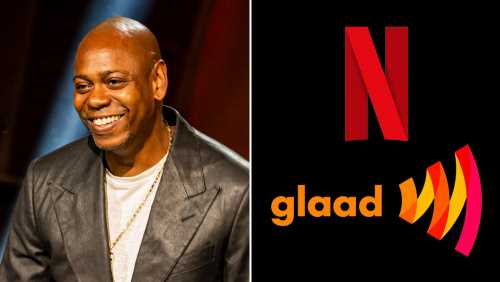 Hours after a memo by Netflix’s co-CEO declaring that trans remarks in Dave Chappelle’s latest special didn’t “cross the line” was made public, one of the nation’s leading LGBTQ+ advocacy organizations has called out the streamer for some serious hypocrisy.

“Netflix has a policy that content ‘designed to incite hate or violence’ is not allowed on the platform, but we all know that anti-LGBTQ content does exactly that,” said GLAAD Monday in a statement over the controversial The Closer and the suspension of a trans staffer who criticized the streamer over their support of the comedian

“While Netflix is home to groundbreaking LGBTQ stories, now is the time for Netflix execs to listen to LGBTQ employees, industry leaders, and audiences and commit to living up to their own standards,” the blunt and brief statement added on Monday, which is also National Coming Out Day.

In his internal October 8 correspondence, Ted Sarandos insists that he and the streamer’s corner suite crew don’t believe Chappelle’s special or specific remarks cross “the line on hate.”

Clearly hoping to establish the party line early, Oscar Muesum chair Sarandos also tossed off a salvo of his own in the memo. “You should also be aware that some talent may join third parties in asking us to remove the show in the coming days, which we are not going to do,” he wrote late last week.

Netflix had no comment on this new correspondence from GLAAD, when contacted by Deadline this afternoon. Perhaps as noteworthy in the larger picture of Hollywood relationships is the fact that the  organization that has celebrated the streamer’s talent like Ryan Murphy repeatedly in the past.

Last year alone, EP Murphy was honored with GLAAD Media Awards nominations in Outstanding Comedy Series for The Politician and in Outstanding Drama Series for Pose — the former is a Netflix Original. The producer, writer, director and more was given the exalted Vito Russo Award in 2020 too.

The streamer insists that “it is absolutely untrue” that the suspension of engineer Terra Field has anything to do with her pointed tweet of October 6, the day after Chappelle’s sixth Netflix special debuted.

However, they won’t confirm on the record another reason for the move. Though there are whispers that Field and two other Netflixers joined a meeting that they weren’t supposed to, the fact is the tweet that laments  Netflix willingly permitting The Closer to attack “the trans community, and the very validity of transness” was a pretty public rebuke from inside the company.