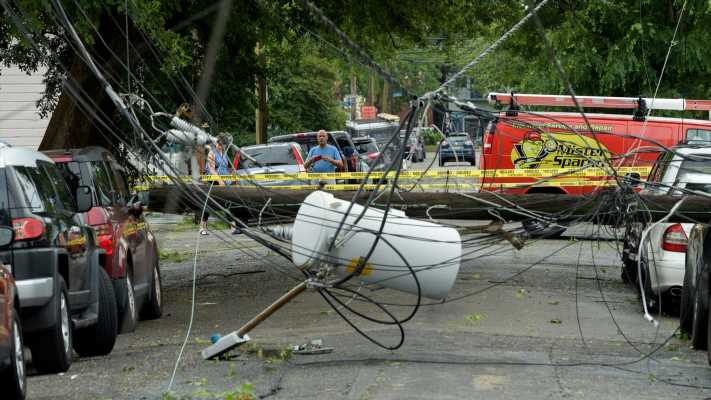 A deluge of rain hammered parts of the Gulf Coast Monday, leaving cars stranded, flooding houses and streets, and threatening thunderstorms for the next week.

The NWS also issued a flash flood emergency in Lake Charles, Louisiana, as some areas reported up to 12 inches of rain. Photos on local media showed water up to the doorsteps in the town while vehicles sought to navigate flooded streets in another part of town.

Lake Charles Mayor Nic Hunter told reporters that the rainfall totals will probably meet the threshold for a 100-year event. As of late Monday, it was the third-wettest day on record for Lake Charles, Accuweather reported.

“We have got to have a really close look and have a very bold and honest conversation about these weather events. They are happening more often,” he said. “Climate change is something that is affecting this community.”

Lake Charles is a part of Calcasieu Parish, where “all areas of the parish are experiencing flooding on the roadways and conditions are deteriorating and changing quickly,” the sheriff’s office said on Facebook.

The resident of this home in Lake Charles said they had to swim to safety with their newborn as the water keeps rising. Contraband Bayou is flooding many areas that have never seen water before. 📸 Lexi Theriot #lawxpic.twitter.com/MrhyHdPv5v

“We are also urging residents to stay put and do not travel on the roadways,” Sheriff Tony Mancuso said on Facebook. “Driving on the roadways at this time is putting yourself in danger, along with causing damage to other residents’ property from the rising water.”

A number of tornado warnings had also been issued in various cities and the NWS urged residents at risk to seek higher ground. The weather service said the likelihood of flooding is high with the incoming storms throughout the week.

Louisiana Gov. John Bel Edwards said on Twitter that Homeland Security for the state was in contact with local leaders about their needs during the “dangerous and potentially life-threatening” flash flooding.

“Please join me in praying for the families in Lake Charles who have seen so much loss already,” he wrote.

Western Louisiana is still recovering from Hurricane Laura and Hurricane Delta last year. And then, in February, frigid temperatures froze pipes and led to problems getting drinking water to area residents. 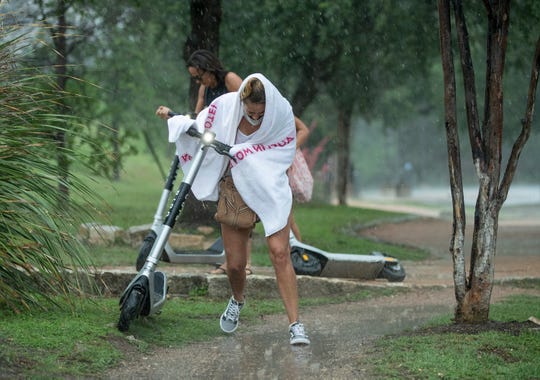 Vanessa Alvarez gets caught in heavy rain while riding a scooter along South Congress Avenue on Monday May 17, 2021. (Photo: Jay Janner/American-Statesman)

The National Weather Service’s Little Rock office said on Twitter that parts of central Arkansas also had seen two to more than four inches of rain as of Monday morning. More rainfall is expected this week, the agency said.

On Sunday afternoon, multiple homes had sustained minor damage from a tornado in Bell County, Texas, a county just north of Austin. Some outbuildings and chicken coops were also damaged or destroyed, reported Accuweather.

High rates of rainfall and possibly severe thunderstorms are all but certain Tuesday in Texas, the NWS said, as winds of 10 to 15 mph deliver humid, moisture-rich air from the Gulf Coast, along with gusts as strong as 25 mph.

The new weather normal in the US: Hotter than it used to be, thanks to climate change

‘Luckiest man alive’: What’s it like to be trapped in a car crushed by a falling tree?

Last week, U.S. scientists at the National Oceanic and Atmospheric Administration declared the end of La Niña, which is welcome news for Central Texas, where La Niña springs historically have tended to be hotter and drier than normal and lead to worsening drought conditions over the summer.

La Niña, the seasonal cooling of the tropical waters in the eastern Pacific Ocean, has had a strong influence on Central Texas weather conditions in the past several months. Forecasters said the phenomenon played a role in last year’s record-breaking hurricane season in the Atlantic, yet inversely kept much of the Austin area drier than normal in the fall and winter.