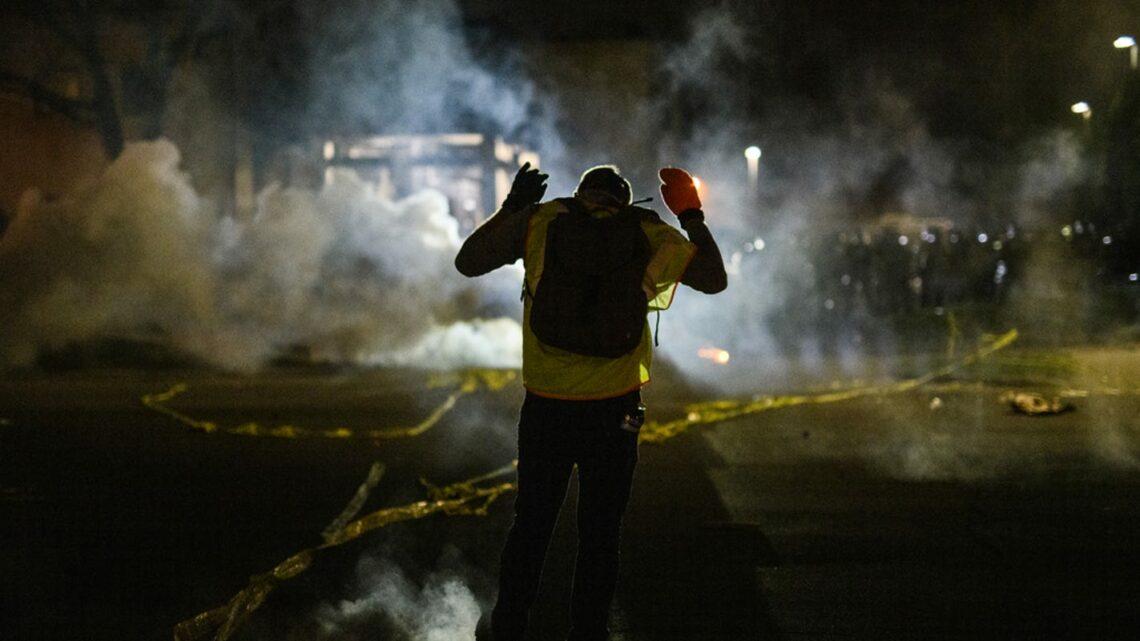 Curfew lifted after protests over death of Daunte Wright, 20-year-old Black man shot by police during traffic stop: What we know

BROOKLYN CENTER, Minnesota – A curfew was lifted early Monday after the fatal police shooting of 20-year-old Black man during a traffic stop triggered a night of protests.

Daunte Wright’s death comes as Minneapolis, just 10 miles south, was already on edge in the middle of the trial of former police officer Derek Chauvin, who is facing murder charges in the death of George Floyd.

A woman who identified herself as Wright’s mother, according to a Facebook Live video, said her son was pulled over because of air fresheners hanging in his rearview mirror. Police in Brooklyn Center said in a statement the driver they pulled over had an outstanding warrant and got back into the vehicle when they tried to take him into custody.

Early Monday, Humvees, construction vehicles and police surrounded the building with graffiti on the department sign and debris littered about.

Here’s what we know Monday:

What happened during the Daunte Wright shooting?

Brooklyn Center Police Department said in a statement that officers initiated a traffic stop around 2 p.m. Sunday. The statement did not indicate what the initial stop was for other than “a traffic violation.” Officers determined the driver had an outstanding warrant and tried to take the driver into custody, police said.

The driver re-entered his vehicle, and an officer shot him, police said. The car drove several more blocks before striking another vehicle. Police said the driver died at the scene, and a woman in the passenger seat was hospitalized with non-life-threatening injuries.

No one in the other vehicle was harmed, police said. Officers were also wearing body cameras, which the department said were believed to be activated; the police car also had a dash-board camera.

Daunte’s mother, Katie Wright, told reporters her son was driving a vehicle the family had given him weeks ago and called her as he was being pulled over with his girlfriend in the car, the New York Times reported.

“He called me at about 1:40, said he was getting pulled over by the police,” she said in a Facebook Live video. “He said they pulled him over because he had air fresheners hanging from his rearview mirror.”

The police department said it asked the Bureau of Criminal Apprehension to conduct an independent investigation.

What happened during the protests in Brooklyn Center?

Wright’s family and friends were among those who marched in the streets and carried signs and flags that read “Black Lives Matter.”

About 100 people had gathered near the scene where Wright died, according to the Star-Tribune. Protesters pushed past police tape, confronting officers donning riot gear and breaking the windshields of two police cars. Police fired non-lethal rounds to try to disperse the crowd, the newspaper reported.

At the police department, a large crowd was met with armored police officers who formed a riot line. The protest there had been largely peaceful up until that point.

Police issued dispersal orders and fired tear gas, flash bangs and rubber bullets into the crowd of around 500 people that had gathered, the Star-Tribune reported.

John Harrington, commissioner of the Minnesota Department of Public Safety, said protesters started throwing rocks and other objects. The group had mostly dispersed by about 1:15 a.m. Monday.

Today's mortgage refinance rates — one key rate rises while others stick below 3% | April 12, 2021