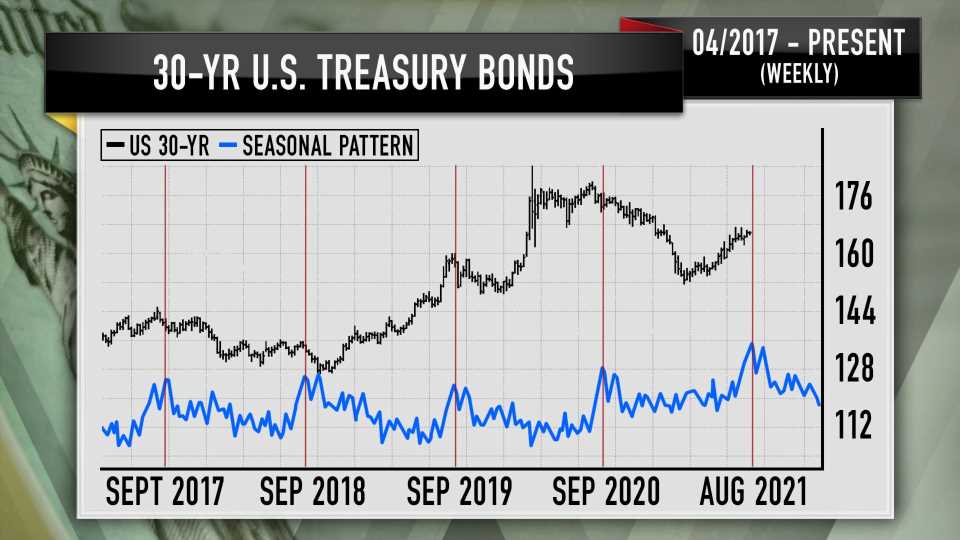 CNBC's Jim Cramer on Tuesday warned that Wall Street could be unsettled by possible near-term moves in the bond market.

"The charts, as interpreted by Larry Williams, suggest that long-term Treasury bonds are about to get hammered over the next couple weeks," the "Mad Money" host said. "You better believe that will have negative consequences for the stock market … because it often presages rate hikes from the Fed. After this big spike and record high after record high after record high, that's the last thing we want to see right now."

Cramer said Williams provided multiple charts that lend credence to the prospect of an upcoming decline in prices for the 30-year Treasury, known as the long bond, which would lead to a spike in yields since they move inversely to each other.

One factor at play is seasonality, with Williams, a longtime market technician, observing that "for the last several years, Treasury bonds have a distinct tendency to start falling in late August and in early September," Cramer said. "If that pattern holds true this year, then it would mean we're about to see a significant rally in long-term interest rates."

However, Cramer acknowledged seasonal patterns are not perfect and it's important to consider other indicators, such as the Commodity Futures Trading Commission's weekly Commitments of Traders Reports.

When analyzing those reports for Treasury futures, Cramer said Williams likes to look for divergences in the buy and sell decisions of small speculators and large, commercial players.

"The small speculators, representing the public, have gotten increasingly bullish on long-term Treasurys, while commercial hedgers — mainly the banks — have been dumping them left and right. In a situation like this, somebody has to be wrong, and, according to Williams, it's usually not the commercials," Cramer said. "Who do you think has a better understanding of the bond market: the public, or the plutocrats? My money's always on the plutocrats."

"If something rallies, but there's no follow-through from the On Balance Volume line, it tells Williams that that rally will likely be short-lived," Cramer explained. "Sure enough, when you look at the rally in Treasurys earlier this summer, the bond prices went to new highs, but the on-balance volume line stayed flat. For Williams, that's still another sign that these levels will likely prove to be ephemeral."

The 30-year Treasury yield stood around 1.917% Tuesday evening. The yield was above 2.3% at times in early June, but has been trending lower since then.

"Put it all together and we could be looking at a big downtick in bond prices, which translates into a significant rally in long-term interest rates," Cramer said. "You could read that as a sign of a strengthening economy, or a sign that the Fed needs to tighten because inflation's flaring up again, or a simply a sign that there's going be less foreign money flowing into our bond market."