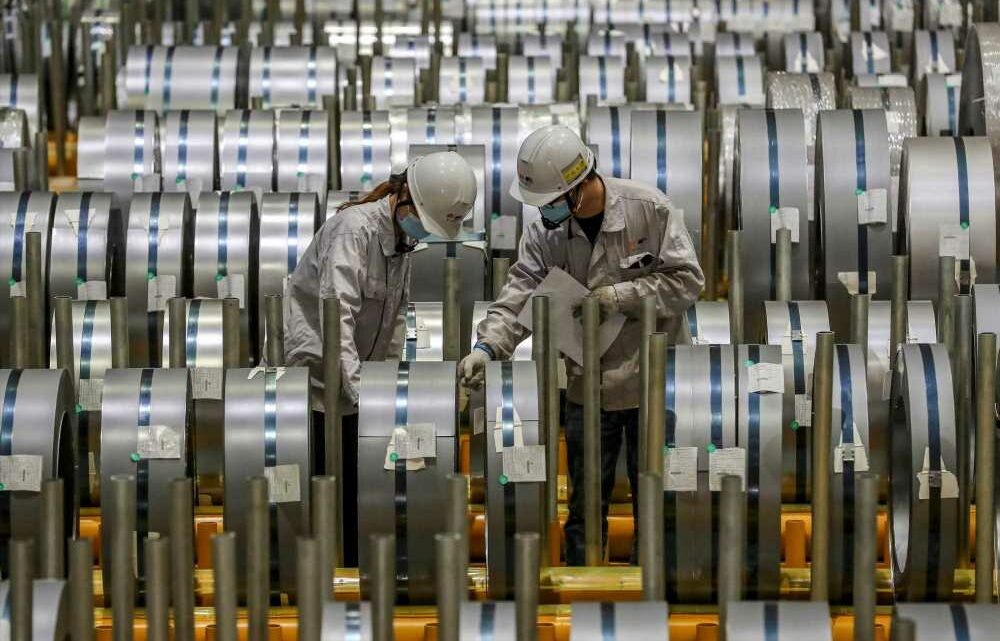 China's producer prices surge the most since 2008, cutting into business profits

BEIJING — China's producer price index rose 9% in May from a year ago as commodity prices surged, the National Bureau of Statistics said Wednesday.

That marked the fastest increase in production costs since September 2008, when the index rose 9.13%, according to Wind Information.

While the gains surpassed expectations of an 8.5% increase, according to a Reuters poll, the rise does come off a low base. The index fell 3.7% in May 2020 during the initial months of the coronavirus pandemic.

Rising raw material prices are a particular concern for companies in the building materials business, as well as iron and steel, said Gan Jie, a professor of finance and academic director for MBA programs at the Beijing-based Cheung Kong Graduate School of Business.

"These companies are more pessimistic. They see a very sharp rise in costs, and they think it's going to run until the end of the year," she said Wednesday, noting other businesses expected prices would normalize sooner. That's based on her team's follow-up in the last week on a survey of more than 2,000 Chinese companies in the industrial sector.

The initial survey conducted in late March and April found business sentiment remained unchanged in the first quarter compared with the prior quarter. However, the study found the proportion of companies reporting gross profit margin below 15% has increased to about 70%.

"They are certainly being squeezed," Gan said. "A few companies even said they cannot accept orders right now, because the more they produce, the more they are losing money. Their net profit is in the negative numbers."

Chinese consumers are getting richer. UBS picks the stocks to cash in

The impact on mid-sized and small businesses is "rather large," Wang Jiangping, vice minister of the Ministry of Industry and Information Technology, told reporters last week in Mandarin, according to a CNBC translation.

He noted that their operating profit margin of 6% in the first four months of the year was 2 percentage points lower than that of large enterprises — a gap that is increasing.

On the other hand, private consumer costs rose only slightly. The statistics bureau said Wednesday that the consumer price index rose 1.3% year on year in May, missing expectations for a 1.6% increase. The index has been dragged down by a drop in pork prices, following their surge in the last two years.

China's manufacturers also face pressure from an expected drop in overseas purchases. A surge in exports, driven by global demand for face masks and other health-related goods, helped boost China's economy last year during the height of the coronavirus pandemic.

Businesses are absorbing costs for now and not cutting workers, Gan said. However, she said Chinese manufacturers expect foreign orders to decline slightly, even if overseas demand does ultimately stay about the same.

"In general people are uncertain about what's happening overseas," she said. "One is Covid, the other is (the) trade war and overall sentiment against Chinese businesses."

Tensions between China and its largest trading partner, the U.S., have escalated in the last three years as both countries levied tariffs on goods from the other. Chinese exports to the U.S. grew in May from the prior month, but imports declined.

In addition, a major investment deal between China and Europe which neared closure late last year now looks unlikely to reach completion due to sanctions imposed by each side over alleged human rights abuses.

TA: Bitcoin Extends Losses, Why $30K Holds The Key For Next Wave