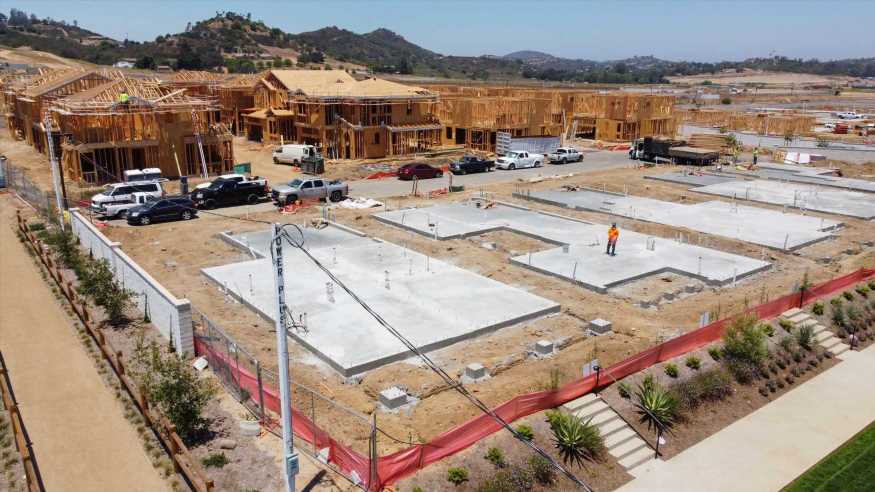 There are several signs in the market for newly built homes that point to a potential slowdown for the nation's homebuilders.

Data released Tuesday added to the evidence that builders are pulling back.

Single family housing starts continued to rise in June, many of those for homes already sold. But building permits, an indicator of future construction, fell more than expected last month to the lowest point since August and were about 100,000 units below the six-month average, according to the U.S. Census Bureau.

"The single family market in particular desperately needs more new homes, especially on the lower end where first-time home buyers need some price relief and more supply choices, but we also know that it is getting more and more difficult to deliver from a builder perspective at the wanted price points," said Peter Boockvar, chief investment officer at Bleakley Advisory Group.

Elsewhere in the market, mortgage applications to purchase a newly built home dropped nearly 24% in June year over year, according to the Mortgage Bankers Association. That was the third consecutive month of decline.

The average loan amount also hit another record high at $392,370.

"In addition to price increases, we are also seeing fewer purchase transactions in the lower price tiers as more of these potential buyers are being priced out of the market, further exerting upward pressure on loan balances," Kan added.

The latest developments come after the coronavirus pandemic produced the hottest year for both housing demand and home construction in more than a decade.

Homebuilder sentiment, while still high, dropped in July, with builders citing continued pressure on construction costs. Lumber prices, which shot up during the pandemic and hit a record high just a few months ago, have fallen back dramatically. So far, however, that savings has not trickled down to consumers or builders. Prices for other materials are also still rising.

"The recent weakening of single-family and multifamily permits is due to higher material costs, which have pushed new home prices higher since the end of last year," said Robert Dietz, chief economist at the National Association of Home Builders. "This is a challenge for a housing market that needs additional inventory."

Builders are also hampered by both supply chain and labor issues.

"Reports of multi-month delays in the delivery of windows, heating units, refrigerators and other items have popped up across the country, delaying delivery of homes and forcing builders to cap activity, and many builders continue to point to a shortage of available workers as a separate challenge," said Matthew Speakman, an economist at Zillow.

The median price of a newly built home in May was up 18% compared with May 2020, according to the Census. Prices for existing homes are also up in double digits from a year ago. While mortgage rates have dropped significantly in the last few weeks, it is not enough to make up for those big price gains.

Who was Ian Huntley’s ex-girlfriend Maxine Carr and where is she now? – The Sun
Technology